Hundreds of thousands of protestors took to the streets on Thursday in 120 different cities, calling for more to be done about the pay gap, gender violence and harassment, among other issues 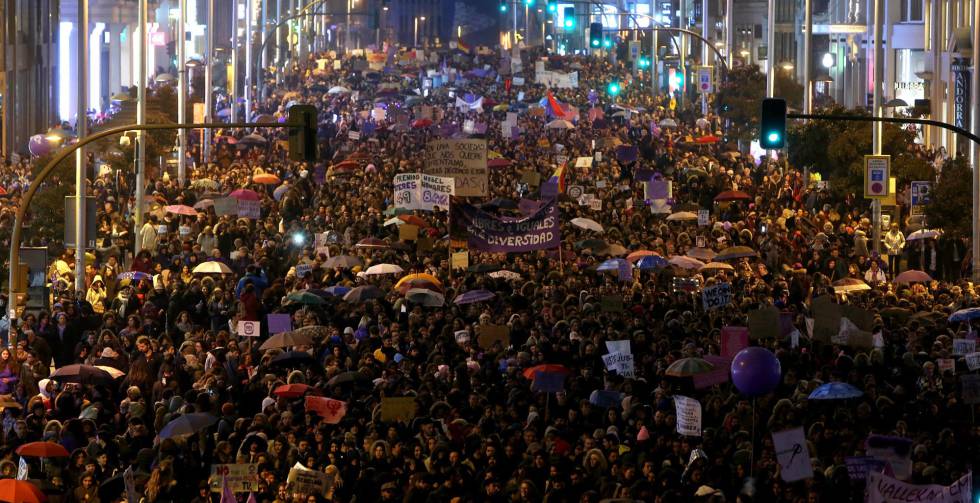 The demonstration in Madrid passes through Gran Vía on Thursday night. JAIME VILLANUEVA

Women in Spain were the protagonists of a historic mobilization on Thursday, March 8, International Women’s Day, coming out onto the streets en masse to protest against discrimination in all of its forms, and placing Spain on the cutting edge of the global feminist movement. Hundreds of thousands of people joined marches on the streets of 120 Spanish cities to demand greater gender equality.
The 24-hour strike that had been called, however, saw little support, despite being observed by a number of high-profile figures in the media, who gave the stoppage widespread visibility. Partial stoppages, of two hours or so, and that had been backed by Spain’s main UGT and CCOO unions, were successful, and were observed by six million workers, according to the labor organizations.
“This day will be studied in the history books,” the organizers claimed.
Few times has a protest of this kind been so successful before it even took place. But that is what happened with the March 8 activities, with widespread debate on gender inequality in Spain going on for weeks before – whether it be about the role of women in the home, the salary and pension gap, the glass ceiling or sexual violence and harassment. The Spanish government, including the prime minister, Mariano Rajoy, of the conservative Popular Party (PP), have had to alter their tone on the strike and protests, after initially criticizing the initiatives.
The feminist strikes and marches, which were called under the slogan “If we stop, the world stops,” have placed Spain on the forefront of the movement toward gender equality, being the only country that called for work stoppages. This was reflected in widespread media coverage around the world.
Hundreds of thousands of people around the country took to the streets wearing the color violet, which symbolizes the feminist movement. In Madrid the attendance greatly outweighed that seen at last year’s march, with the central government delegation estimating 170,000 people in attendance compared to 40,000 last year. Union sources put the figure this year at one million, compared to their estimate of 500,000 last year.
In Barcelona, the municipal police calculated 200,000 demonstrators, while the organizers put the figure at 600,000.
“We have brought Madrid to a standstill,” proclaimed one of the organizers, Victoria Castrillón, to the crowds on Thursday. “This is our day and tomorrow there will be more. We are not going to stop. For us. For those who aren’t here, for those who will come. For those who don’t listen.”
English version by Simon Hunter.

The gender no-pay gap: Women in Spain do twice as much unpaid work as men
Publicado por salud equitativa en 7:10