Female employees from newsrooms in Spain, Mexico and Brazil are supporting the fight for gender equality 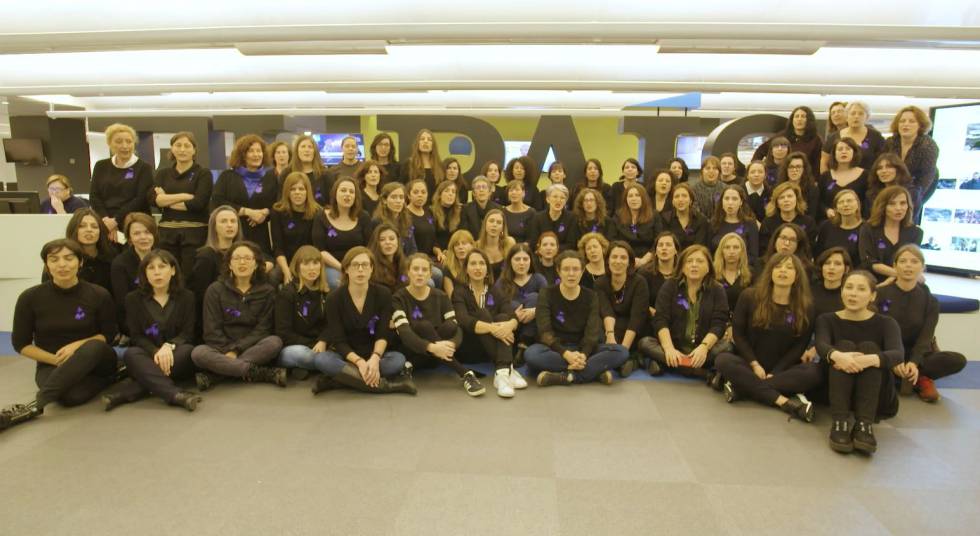 Female journalists in the EL PAÍS newsroom in Madrid, in a photo taken last week in support of the feminist march
EL PAÍS
Madrid 8 MAR 2018 - 10:37 ART
The March 8 feminist strike on International Women’s Day has been overwhelmingly observed by employees of EL PAÍS. The vast majority of female staff from the organization’s newsrooms in Spain (Madrid and Barcelona), Brazil and Mexico have stopped work to support the 24-hour strike for gender equality.The offices are almost solely filled by men today, Thursday.
In a meeting held February 28, employees of EL PAÍS voted by a wide majority to back the general strike and agreed only women should take the day off.
In the weeks leading up to the stoppage, female journalists from EL PAÍS have organized protests and initiatives to explain the importance of supporting the action, which was called last year following mass demonstrations against gender violence, work and pay discrimination, and male oppression.
As part of its commitment to the cause, EL PAÍS has also put together a special on International Women’s Day with various articles on the struggle for women’s rights, including a poll by Metroscopia on gender inequality and an interactive feature on female representation in Spain.
English version by Melissa Kitson.
One in three Spanish women has felt sexually harassed, new poll finds
Roads blocked and transit disrupted as Women’s Day strike begins in Spain
Women in Spain earn 13% less than men for similar work, new study shows
A movement that’s being driven by young women
Publicado por salud equitativa en 7:12