A temporary beach cemetery in Valencia, to mark 739 women killed 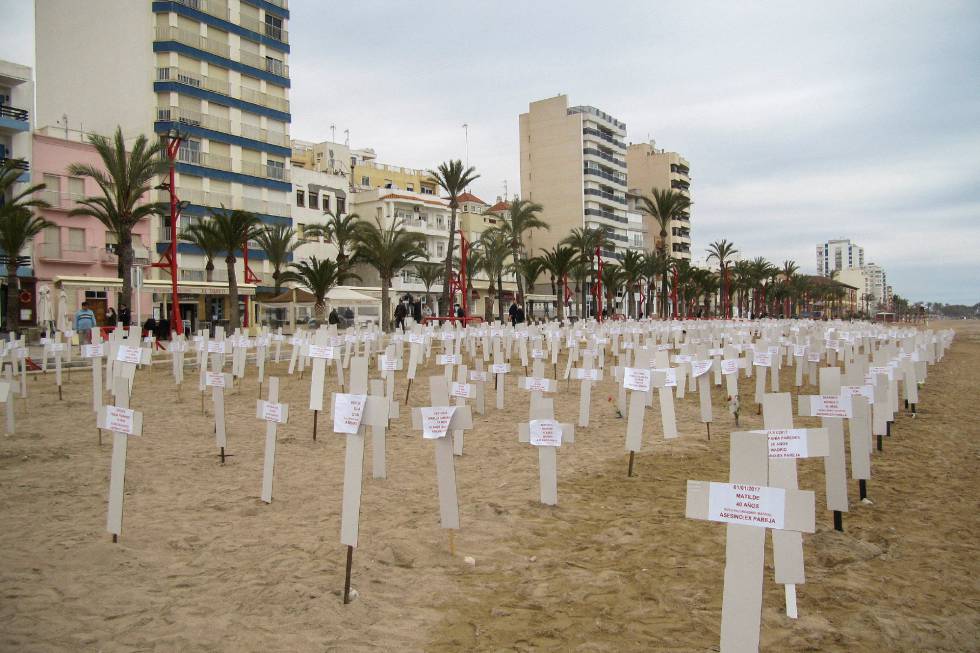 Crosses on the beach at Vinaròs. DOMENECH CASTELLÓ EFE

A total of 739 wooden crosses, planted in an area measuring 2,800 square meters on the beach in Fortí de Vinaròs, in Castellón province (Valencia region). One cross for every one of the 739 women murdered in Spain in a decade, between 2007 and 2017, as a result of gender violence. This fleeting cemetery appeared on Thursday, to coincide with International Women’s Day, and will be in place until Sunday.
The initiative has received the support of local residents, organizations and private citizens, and was originally conceived by the Femme Força Feminist Association in Vinaròs, “a collective of women who began to meet after seeing the serious problems that exist in terms of gender violence and killings.” The collective works to educate and increase awareness of the issue, and hopes that the temporary cemetery will prick the consciences of many.
On the beach people can see the names of Spanish women who lost their lives, and the names of those who killed them
The visual impact of those 739 crosses on the sand is huge. Passersby are drawn onto the beach, from where they can see the names of Spanish women who lost their lives, and in many cases, the names of those who killed them. Such as Vanessa, 27, from Zaragoza. Or Josefa, from Seville, killed at the age of 45. Carmen, 80, from Badajoz, and Marta del Castillo, whose life was taken at the age of 17.
There are also the names of two victims from Vinaròs. One of them, Katharina, was 35 when, on November 24, her former partner shot her dead. He had traveled from Germany to carry out his crime.
The cemetery was put in place with very few resources, using donated material and above all many hours of work. There was also a lot red tape to deal with. “The Vinaròs council took care of getting all of the permits from the Valencia Tourism and Coastal agencies to avoid problems occupying the space,” explains the local culture councilor, Marc Albella.

sexism has become so accepted, so internalized, that it’s like the air that we breathe
FEMME FORÇA

“In general it’s been well received,” they explain from Femme Força Vinaròs. “Many people have thanked us. It’s surprising to see how people have been moved by it. But it has also prompted the opposite feelings among people, in particular older people.”
Until Sunday, these 739 crosses will continue to provoke a reaction, by facing up to the way that sexism has become “so accepted, so internalized, that it’s like the air that we breathe,” they explain from Femme Força. “We can’t see it. But [the crosses] denounce the constant drip of victims from these hate crimes.” A total of 739 in a decade.
English version by Simon Hunter.