Seville 14 JUL 2017 - 03:39 ART
Jesús Martínez is 55 years old. He went from being a courier to working in administration at a company in Seville – until alcohol and unemployment derailed his life. Twenty years ago he ended up in Los Pajaritos, the poorest neighborhood in Spain, according to the National Statistics Institute (INE). 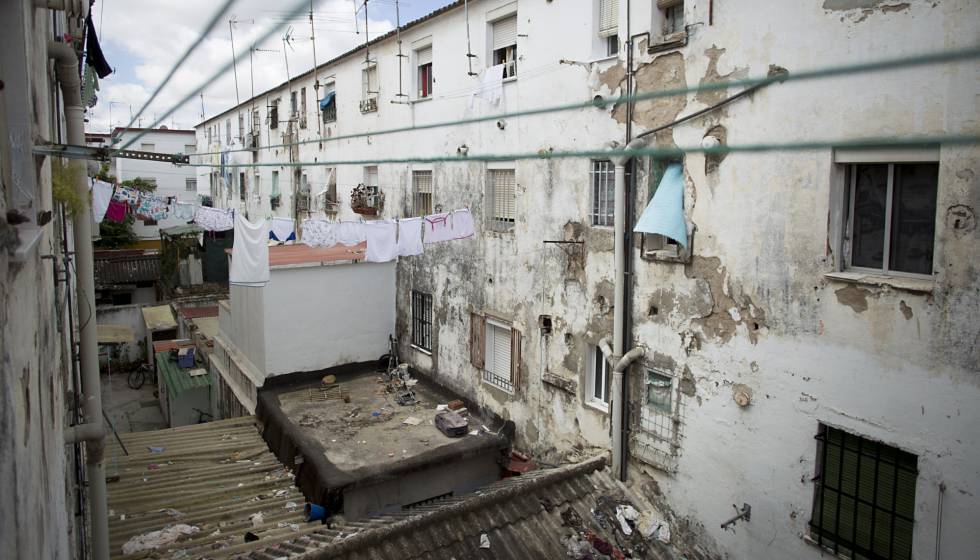 
He rents a 40-square-meter apartment for which he now pays €300 per month, a sum that eats up almost all of the €426 he receives in monthly aid from the government. His daughter is a waitress and she sometimes gives him a little extra. He has seen three holdups near his house, brawls are commonplace, and he knows neighbors that deal all sorts of drugs. “If you don’t get involved, you’re fine,” he says, with resignation in his voice.
Some locals sell raffle tickets for prizes including five-liter bottles of olive oil and cleaning detergent
Los Pajaritos (part of the Tres Barrios-Amate district in Seville) had a median household income this year of €12,307. Last year, when it was also the poorest neighborhood, that figure was €12,614.
Javier Cuenca, who works with Andalusia’s branch of the international organization Save the Children, warns that these incomes are under the official poverty threshold of €13,133. The group currently helps more than 2,300 children, keeping them off the streets during the summer by providing a range of activities.
María José Herranz, who works with the Candelaria sports association, notes that conditions in the neighborhood are not its only issue. Far worse is that way residents “come to think it’s a normal way to live.” Although official figures show unemployment to be close to 40%, Herranz says that the real figure is 80%, since many are not even registered at the area’s unemployment office.
The 21,000 people of more than 15 nationalities that live here survive, in large part, on the edges of the official economy – the majority of them, from the €426 of help from the state each month in combination with money earned from odd jobs, such as housecleaning, working as street vendors or collecting scrap materials. Some even sell raffle tickets for prizes of basic necessities, including five liters of olive oil and cleaning detergent.
Almost everyone lives hand to mouth, according to Herranz, who stresses that many locals have designed daily routes that see them hopping from food bank to food bank in order to get their three meals each day.
These people comprise the large majority of the neighborhood. But there is another group dedicated to criminal activity, including drug trafficking, the sale of weapons, and even offering illegal loans at extortionate rates. Seeking money from an organization that operates out of premises owned by the church, one woman asked for €1,500 and ended up accumulating a debt of €30,000.
The neighborhood’s most dramatic drug-trafficking incident took place this past April. A young man was killed, another was left in critical condition, and two others received serious injuries after a drug lab exploded at a home in Amate.
The neighborhood lacks everything. The church acts as the civic center, and associations such as Candelaria and Save the Children have to fight for every little thing they need. For their summer camps, they typically need to provide children with a change of clothes, since many only arrive with one set. During the year, they also work to keep the children in school, since 20% have been reported to cut class.

Almost all of our effort is directed towards getting children educated

MARIA JOSÉ HERRANZ, SOCIAL WORKER
Although these organizations work to provide basic necessities, what they hand out to people is hardly enough to get by on. One woman spends her days in Seville’s Charco de la Pava flea market reselling the items she receives from neighbors just to survive.
Parents in Los Pajaritos are notably young as well. Candelaria sees many couples of 23-year-olds that already have two children. The largest houses are only 60 square meters, and some have to accommodate families of seven to eight people. Many households illegally hook up to water or electricity supplies, when possible.
But the greatest issue, according to Herranz, is that parents do not consider the education of their children to be a priority. Six out of 10 parents have no formal education and do not believe that studying will lead to a better life. “Almost all of our effort is directed towards getting children educated so they can find a way out – not so that they can leave the neighborhood, but so that they can transform it. There have been success stories. I’m optimistic,” Herranz says.
Andrés Ceballos, who works with Save the Children, also believes the kids he works with have a promising future. Having worked with families from all economic backgrounds, he has observed that these children have the same dreams as everyone else. “The only difference is that underprivileged families are 10 times more caring, once their confidence picks up and they become accustomed to a more routine and orderly life,” he says.

English version by Henry Hahn.
Almost 28% of Spanish population at risk of poverty or social exclusion