Early reports say cause of death was a gunshot to the chest, suggesting suicide 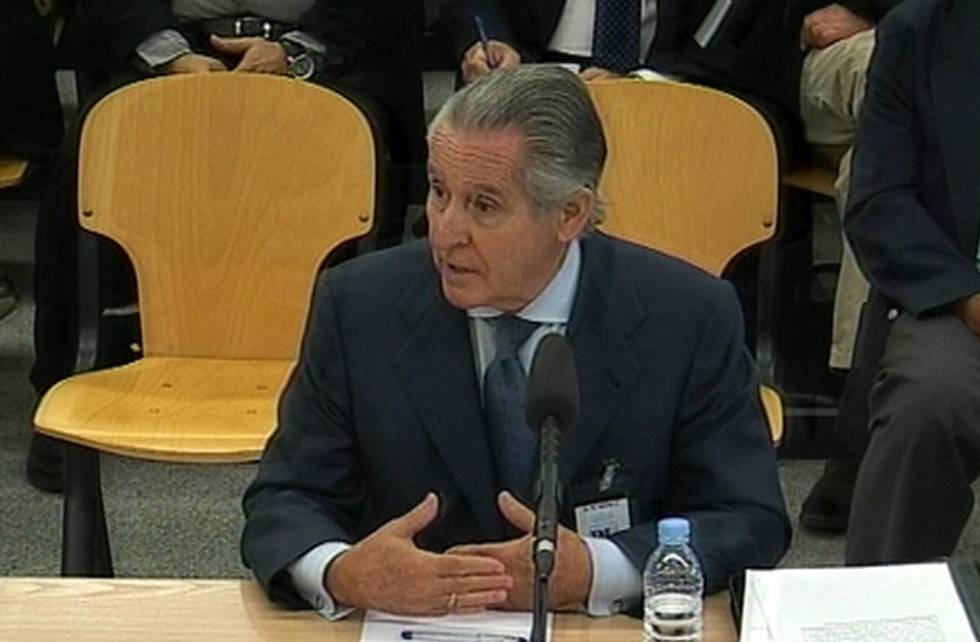 Miguel Blesa in the High Court over the “black credit cards” scandal. EFE


The former chairman of failed savings bank Caja Madrid, Miguel Blesa, was found dead this morning on a country estate in southern Spain’s Córdoba province.
Police sources said Blesa had arrived at the property, named Puerto del Toro, on Wednesday with the intention of spending several days there. Before going out hunting, he had breakfast with friends and told them he was going out to the garage to move his car.
It was an employee of the 1,600-hectare estate who called the emergency services at 7.50am to say that there was a man lying on the ground inside the garage with a bullet wound to his chest. Health personnel dispatched to the scene confirmed that Blesa died at 8.40am, according to the Civil Guard, which has taken over the investigation.
The former Caja Madrid chief was reportedly hurt at being described as a predator
These same sources are ruling out a hunting accident. Preliminary evidence suggests that Blesa died from a shot fired by a hunting rifle, and that suicide was the probable cause. At noon, a judge had the body transferred to the Córdoba Legal Medicine Institute to undergo an autopsy that will determine the official cause of death.
Blesa was one of 65 defendants found guilty in March of misusing millions of euros from the lender Caja Madrid through the use of tax-free credit cards in the so-called “tarjetas black” scandal.
The 65 people involved in the case spent a collective €12.5 million between 2003 and 2012 on tax-free personal expenses ranging from vacations and jewelry, to meals in expensive restaurants, all paid for with credit cards unofficially granted to them by the heads of the Caja Madrid savings bank, then later at Bankia, the entity that was created from the merger of seven struggling regional lenders.
Miguel Blesa had not seemed depressed or downcast in recent days, according to statements made by sources who knew him personally to Europa Press news agency. He did seem concerned at times over the legal battle that he had been caught up in for several years.
The same sources said that his death did not come at a particularly bad time for Blesa, since he had “high hopes that the Supreme Court would rule in his favor in the black credit card case” following his appeal against the six-year prison sentence handed down by Spain’s High Court, the Audiencia Nacional.
One of the toughest moments for Blesa, in terms of his public image, was when a prosecutor described the beneficiaries of these credit cards as “predators.” The former Caja Madrid chief was reportedly hurt by this description.
“In the toughest moments he never looked downcast, and curiously this was not the worst moment that he was going through; in fact, it was the quietest,” said the same sources.
The top convictions in the case were for Blesa, who was sentenced to six years in prison, and for his successor Rodrigo Rato, a former International Monetary Fund (IMF) chief who was also deputy prime minister of Spain between 2003 and 2004. The latter was handed a four-and-a-half-year sentence. Both men appealed.
Anti-corruption prosecutors had initially called for Blesa and Rato to pay a civil bond to avoid jail. In the case of Blesa that figure was between €75,000 and €100,000. However, Spain's High Court chose not to impose the bond until the appeal was resolved.
Yet Blesa had already seen the inside of a jail – if only for 15 days – in June 2013, when a judge sent him to Soto del Real penitentiary in Madrid over his role in the acquisition of Florida’s City National Bank by Caja Madrid on November 7, 2008.
Blesa, who approved the purchase for over $1.12 billion, was charged with overpaying by more than 50% and bypassing regional laws that required permission from the Madrid government for transactions worth more than 5% of the lender’s capital. The Bank of Spain had also expressed misgivings about the Florida bank’s solvency.
Failed savings bank Caja Madrid was once Spain’s fourth-largest lender, with more than seven million customers and annual earnings of over €2 billion during the real estate boom. But over a space of 20 years or so, the flagship savings bank became a refuge for dozens of politicians who were granted a seat on its board as a reward for their loyalty or internal power.