I'm not hot on Trump, but a defeat for 1 percent feminism is overdue. 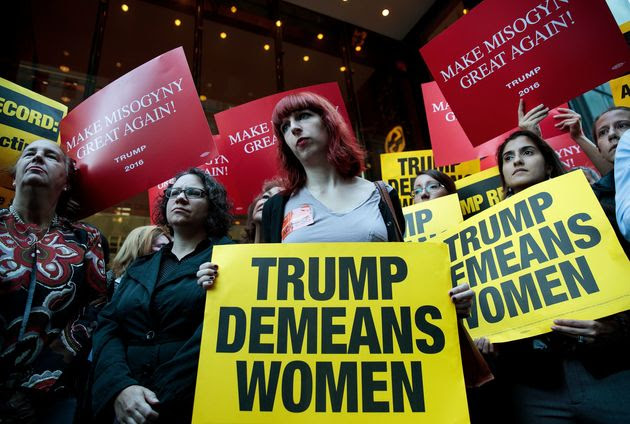 So now we know. We have just found out that condemning voters as a "basket of deplorables" and running on a ticket promoting one percent feminism will not win you the US election. But do not expect any self-realisation on behalf of our liberal snowflakes who will now need one massive safe space just to get through the day.
I just worry for my feminist friend Girl Power/Feminist Future/Fabian Solutions who I believe are the same person. I suspect this extra special snowflake is melting away in her sorrow somewhere, perhaps typing out her despair in bold type. She was so looking forward to "Hillary smashing the last glass ceiling and win for women everywhere." Etc etc. Poor lass.
Anyway, as you know, I am not too hot on Trump but I am relieved that I do not have to endure Hillary and her harpies for the next four years. The truth is a full 42 percent of women voted for Trump, along with 53 percent of men.
In fact, Hillary lost white women without a degree by more than 20 points. If that is not 1 percent feminism I don't know what is.
At least one reason Clinton lost this is that her groupies lack any awareness of the kind of society they have created. They wanted the Christian Right brought down – and they got a post-Christian Conservative President in the form of Trump instead. Good luck with that one.
It is because he was post-Christian and never relied on the social conservative card that he could never be undone by his chequered family history. And the idea that an 11-year-old tape revealing his vulgar side would sink him looks now to be naive in the extreme.
The oh-so-modern liberals who ushered in a hyper-sexualised society told everyone that we should just let it all hang out. The Democrats are the party of Gore Vidal remember, so the idea that they could then play the morality card when Trump was caught sexualising women was just plain idiotic, not to mention hypocritical. It is not the 1950s anymore, as the Democrats love to remind us.
I believe the most telling stat of the exit polls was this. A full 83 percent of Clinton voters think the condition of the nation's economy is excellent. Excellent!
I mean where do these people live – oh, I know, in gated communities in California and apartment buildings with doormen on the Upper East Side in New York.
No, the economy might be running along nicely for you and your globalised family, but that is not the case for your fellow countrymen whom you do not seem to care about. In contrast, a full 79 percent of Republican voters felt the condition of the economy was poor. But that is one percent feminism for you – it gets all riled up about the gender pay gap between six-figure earning lawyers, but it does not care about much else.
The final issue is how the liberals have so disastrously overplayed their hand on social matters. Instead of leaving things such as abortion and gay marriage to the states, as per the Constitution, they forced them upon the whole country through an unelected Supreme Court instead. And, once passed, there is no room for compromise. People feared Hillary was coming for their religious freedom next, which no doubt explains why 58 percent of Protestants and 52 percent of Catholics voted for Trump.
For years now, anyone who is not a signed-up supporter of partial birth abortion, unlimited immigration and gay marriage was labelled a fascist. But if you keep using that label to silence and intimidate, soon enough no one listens to you, even when you say "but this time I really mean it!" "He really is a fascist," they scream to an empty room. Liberals: you have no one else to blame but yourselves. Now go to your room and think about what you have done.
Laura Perrins is Co-Editor of The Conservative Woman, a British blog, where this article was first published. It is reproduced here with permission.

You won’t be surprised, dear reader, that today’s articles are mostly about the US President-Elect. Unless you are unfortunate enough to be in the middle of a war, or lucky enough to be passing peacefully from this topsy-turvy world, what looms larger than the shadow of Donald Trump?
Eight months ago, Blaise Joseph cast Trump as a new Constantine, the pagan emperor who set Christianity free. Today we have run his far-sighted article again. “Constantine himself was no pillar of virtue,” Blaise says, but he created the environment which gave Christians the freedom to influence society.” The implications, and the challenge, for today’s Christians are pretty clear, I think.
Also: Surveying the extreme reactions of the progressive media, Michael Cook wonders why they weep over climate change and the white women’s vote, but are so blind to family values. Zac Alstin looks to Confucius to discover continuity in the dramatic regime change America faces. Feisty British blogger Laura Perrins tells Hillary and her feminist harpies that they have brought this cataclysm on themselves. And the Vatican names issues on which it can co-operate with Trump.
Finally, Adam MacLeod reminds us that new sexual identity rights continue to be invented. He describes how the Massachusetts Supreme Judicial Court, in response to a lesbian woman’s claim, has further redefined parenthood. Neither marriage nor biological parentage is necessary. Instead, being “jointly involved in the children’s lives” makes any two people the parents of those children.
Can the Trump Administration halt this craziness?