Romance or sex, both focus on one element of mate selection to the detriment of everything else. 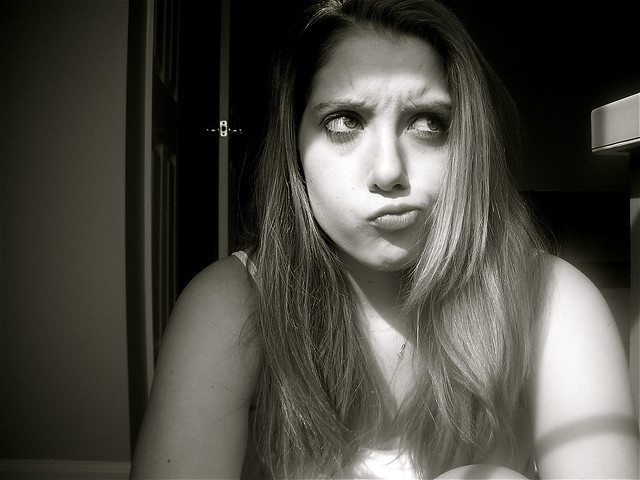 Frustration by Avenue G/Flickr Does The Bachelorette set unrealistic expectations for marriage?

Jojo Fletcher, America’s most eligible primetime bachelorette, has presented her last rose and in so doing has made her final selection. After a hard fought (with some literalfighting) 10 weeks, 26 suitors have been whittled down to one “lucky” man (and his agent), who will have a shot at love and happiness away from the cameras. This season’s fortunate bachelor is Jordan Rogers, a former pro quarterback, and brother to Aaron Rogers, an actual quarterback for the Green Bay Packers. He and Jojo are now able to pursue a match made under the brightest lights in Hollywood to see if they have the stuff to make a happy life together. Currently engaged, and assuming they actually get married, they will be one of only 4 couples out of 26 seasons whose on-air courtship, sponsored by ABC’s The Bachelor and Bachelorette series, culminate in a wedding ceremony. This rather low rate of return seems surprising given the great lengths these shows go to assess a couple’s compatibility.
But let’s face it; the show is strictly for entertainment, right? It’s hard to imagine that anyone would look to the Bachelor/Bachelorette series as a legitimate way to find a one-and-only. You’d have to start with locking down 26 potential suitors, convince them to give up their lives for the good part of a year, and give each one a shot at impressing you, while the others are looking on (oh yeah, they’re also living with each other during this time!). Then, you—and only you—would get to vote on whether or not each gets to stay in your own personal bullpen, while everyone waits to be called up to pitch in the big inning (“Send in the lefty!”).
No, the process of this show is not likely to be replicated in anyone’s life. But does the show set unrealistic expectations for those interested in an intimate relationship that could hopefully culminate in a healthy marriage? What does a show like this do to our expectations of courtship and ultimately marriage?
To answer this question, I’ve been thinking a lot about the similarities I see between the Bachelor/Bachelorette series and some types of pornography.1 Both are housed in and pitched as “entertainment” products before anything else. Forbes has ranked the series as one of ABC’s top five money-making “reality” programs, while estimates of money generated by the porn industry in the US range between $10-12 billion annually. If there wasn’t money to be made by the creation and distribution of these two forms of “entertainment,” we wouldn’t be talking right now.
However, they target very different audiences. The Bachelor/Bachelorette is all about romance and cultivating an intimate relationship, and is written and scripted to appeal to a certain audience: women. Sure, there are probably men who watch it, but if the live “tell-all” show’s audience at the end of the season is any indicator of who actually tunes in on a regular basis, it is women. This may make some sense given that women are said to be relationally oriented, or as New York University’s Carol Gilligan has suggested in her book, In a Different Voice, women are socialized to be more attuned to relationships and think from a relational perspective, perhaps more than men.
Pornography, on the other hand, is predominantly targeted toward men. There are some women who use pornographic material, but men, who are said to be more visually-oriented, are the target market.
Despite their different target audiences, the similarities between porn and the reality-tv show are striking. Consider the following chart that compares both of these media across several dimensions.

Of course, there is no evidence that watching the Bachelor/Bacheloretteseries is in any way detrimental to the viewer, any more than watching any other reality TV program (what’s a few more brain cells lost to TV?). Reality programs, however, present themselves as a slice of reality, or of what life in a certain circumstance is really like. They give us a chance to vicariously live through the participants we see on the show. So, when Jojo determines who gets a rose, and thus is allowed to the next round, we too get to be part of that relationship, even if at a distance. And we know from Albert Bandura, the father of social learning theory, that a lot of our learning happens exactly this way. What I see Jojo do and get reinforced for doing is something that I can easily add to my own dating repertoire. The problem is that what I actually see from Jojo during the show has been so scripted, manipulated, and edited that by the time I see it, the final product is nowhere close to her reality or any reality that is within my reach (just watch the blooper reel for confirmation).

The insidious nature of pornography has become the bane to marital therapists across the nation.

Now, to porn. The insidious nature of pornography has become the bane to marital therapists across the nation. It is something we now must routinely assess in order to get an accurate read on what is happening within the relationship. Questions we now often ask include: “How has pornography been a part of your marriage? Are you concerned about the impact of pornography on your relationship? Does either one of you use pornography? Is your spouse aware of your pornography use?” It has caused John Gottman, one of the premier marital researchers over the last 40 years, and his wife, Julie, a respected couples psychologist, to issue an “Open Letter on Porn” on their website. They suggest that, among other things, viewing pornography can create false expectations within marriage, lead to violence against women, and contribute to addiction. They have unequivocally declared that “pornography poses a serious threat to couple intimacy and relationship harmony.”
Those airbrushed images and highly scripted sex scenes can, at a minimum, set unrealistically high expectations for a couple’s sexual relationship. Who could ever live up to it? Indeed, we’re finding out that no one can.
In the end, both pornography and The Bachelor/Bachelorette take only one element of our overall mate selection criteria (pornography focuses on sex, while The Bachelor/Bachelorette focuses on romance) and give that element primacy over other things that make up for a well-rounded, healthy, intimate relationship. Of course, it is too soon to equate what we are discovering to be the negative impact of pornography on couple and marital health to any possible negative impact of reality TV shows likeThe Bachelor/Bachelorette on dating, and ultimately on the expectations we have for our marriages (although romance novels have been indicted in this way). But it is not too early to begin considering the potential implications, and to begin asking what a steady diet of shows like The Bachelor/Bachelorette and pornography will do to the courtship and marriage expectations of rising generations.
Steven M. Harris, Ph.D. LMFT, is Professor of Family Social Science and Director of the Couple and Family Therapy program at the University of Minnesota. He is also the Associate Director of the Minnesota Couples on the Brink Project and a member of the National Divorce Decision Making Study research team. Republished with permission from the Institute for Family Studies blog.
1. I want to be clear that I’m not talking about a direct and exact comparison to all forms of pornography, as there are many types of pornography that go beyond showing mere nudity or sexual acts, and instead combine these images with themes of dominance and violence that further degrade and devalue women, and quite possibly lead to violent acts committed against women.

In addition to the stories below we have special feature for American readers: a survey in which you can tell us how you would vote if the US presidential election were being held today. Some readers have already made their views clear in comments on various articles we have published about the extraordinary campaign we (that is, the Whole World) have been witnessing this year. For others, this is a chance to tell us, anonymously, what you feel about the state of American politics at the moment. In the survey you are largely limited to ticking circles, but if you want to sound off you can always leave a comment. We are keenly awaiting your feedback.