How Muslims interpret the Prophet’s legacy 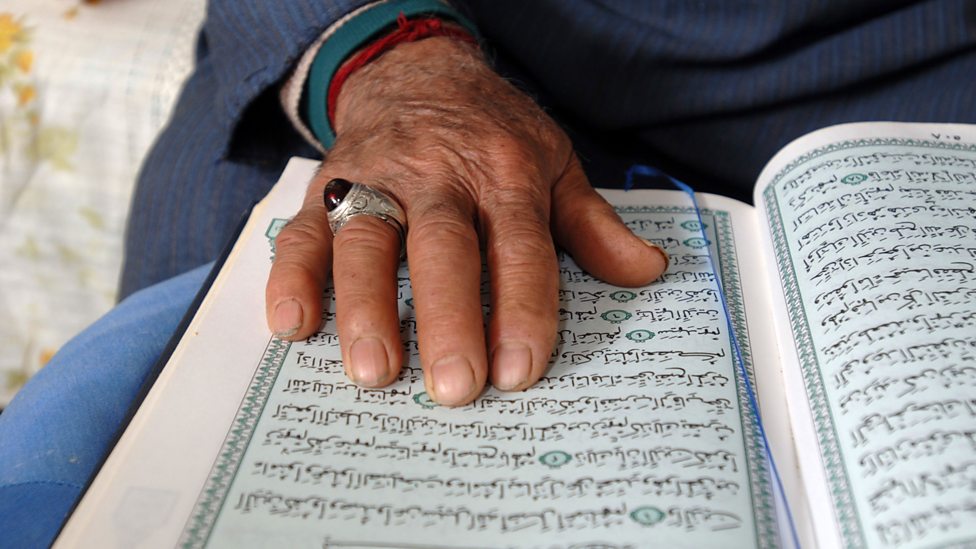 from the BBC
The following book review is the second in a series originally published in the Journal of the Oasis Foundation. The six books selected highlight aspects of aspects of Christianity and Islamic history and culture in the Middle East and their bearing on the situation in the region today.
Oasis was founded in 2004 in Venice to encourage mutual understanding and opportunities for encounter between the Western world and the Muslim majority world. According to Oasis, “interreligious dialogue involves intercultural dialogue because religious experience is always lived and expressed through the medium of culture: not merely at the theological and spiritual level, but also at the political, economic, and social ones.”
********
One of the most disorienting aspects of Sunni Islam, a religion without Church, is the dialectic relationship between the unitary nature of its dogmatic core and the plurality of the interpretations made of that core.
In his latest book, Misquoting Muhammad: The Challenge and Choices of Interpreting the Prophet's Legacy, Jonathan Brown, a professor of Islamic Civilization at Georgetown University, sheds some light on this apparent contradiction. However, to shed light does not necessarily mean to resolve. As Brown writes, “Some aspects of Islam that seem glaringly problematic today actually result from efforts to answer some questions so fundamental that they have never been resolved definitively by anyone. Their answers to these questions are not so much right nor wrong as they are choices between competing priorities”.
The proliferation of sometimes conflicting interpretations and trends emerging from this single body of doctrine therefore remains a matter of fact that the author addresses by taking his cue from an ancient master, the great Indian theologian and reformer Shah Wali Allah (1703-1772), author of Al-Insaf fī Bayān asbāb al-Ikhtilāf (“An Even-handed Elucidation of the Causes of Disagreement”).

The journey on which Brown embarks in the company of his mentor can be divided into three stages.
The first corresponds to the formative period of Islamic tradition, during which the meaning of the Qur’an was unlocked through the efforts of the scholars, who interpreted it through the lens of Muhammad’s sunna and resort to reason. Brown proceeds to give a lucid and compelling review of the methodologies that the different schools developed to approach the Scriptures, collect and preserve the words and deeds of the Prophet, and thus derive from them practical rules.
The second stage was the consolidation of what Brown defines, not without admiration, as “the edifice of classical Islam” and the sharia system. In the author’s words, “far from a myopic or rigid body of law, the Sunni Sharia tradition thus became a swirl of stunning diversity.” For this reason, he observes, “The statement that ‘The sharia says ...’ is thus automatically misleading, as there is almost always more than one answer to any legal question”.
During this second stage, Islamic scholars elaborated their complex epistemological apparatus. This was made up of distinctions in the Scripture between attestation and indication, literal and allegorical meanings, general and specific language, of cross-references between the Qur’an and hadīths and instructions on how to decode a language that is often idiomatic and hyperbolic. Brown suggests at this point that many of today’s exegetical approaches, be they contextualist or hermeneutical, might not perhaps be as original as is often thought.
The third stage refers to the fracture caused by the incursion of modernity, as a result of which some Muslims, uncomfortable with the conflict between modern reason and theological reason, began to question the value of the medieval edifice. The interpretative divergences of the past, of which Brown gives an abundance of examples, were transformed into even more radical and seemingly intractable conflicts.
An emblematic example is to be found in the interpretation of a verse (4:34) in the Qur’an that, in case of acts of disobedience by wives, suggests that husbands should proceed from verbal reprimands to physical violence. Here the dilemma really is insoluble, since no possible compromise may be made between obedience to God’s word and accommodation to the spirit of the times.
Brown himself, whose interest in the Islamic tradition is not merely academic*, leaves the question in abeyance. He rejects a literal interpretation of the text (“There is no such thing as literal meaning”, he says), but adds, “One must accept that a husband using violence to discipline his wife is not inherently, absolutely and categorically wrong. There must be some time, place or situation when it is allowed, or God would not have permitted it”. It is a position that may well leave a bad taste in the mouth, but, neither fundamentalist nor modernist, it probably best captures the feeling of many Muslims.
[* Brown converted to Islam in 1997.]
Michele Brignone is the managing editor of Oasis. He is also a lecturer in Arabic Language at the Catholic University of Milan. His research focuses on modern Islamic political thought and modern Islamic intellectual history. This article is republished with the permission of Oasis.

I suppose we have all seen guys, and gals, at the beach in wetsuits. They look very like a garment that is causing conniptions in parts of Europe at the moment -- the burkini. An Australian (Lebanese Muslim) invention of more than 12 years standing, the modest Muslim swimsuit, covering a woman from head to heel, looks rather sombre in black but is quite stylish in colours. Some people however find it threatening -- among them the Mayor of Cannes who has banned the wearing of them from the beaches of the famous resort town in the name of public safety, good morals and secularism. But with Dolce & Gabanna in Italy and Marks & Spencers in the UK embracing the burkini, it looks as though he is "on the wrong side of history," as people love to say about another culture war... See my piece on this.