In Pakistan’s once-vibrant media, some journalists view intimidation as the new normal | The Indian Express

In Pakistan’s once-vibrant media, some journalists view intimidation as the new normal | The Indian Express

In Pakistan’s once-vibrant media, some journalists view intimidation as the new normal

While journalists have rarely been jailed in Pakistan, several instances of abductions of reporters have created a culture of self-censorship, journalists interviewed said. 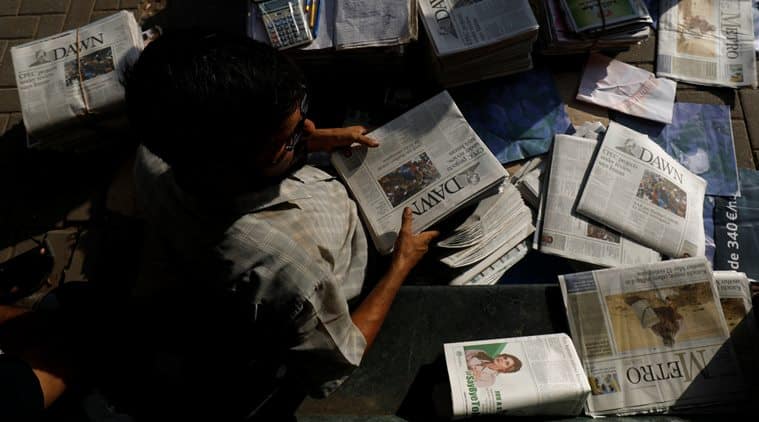 Adding to the atmosphere of fear is a treason case filed against a prominent newspaper columnist, Cyril Almeida, following an interview he conducted with Sharif that mentioned the role of Pakistani militants in the 2008 Mumbai terror attack. (Source: Reuters)
Pakistan’s media was widely seen as among the region’s most vibrant after military rule ended in 2008, but a dozen newspaper and TV journalists say the industry is now in disarray because of intimidation and army pressure.
In separate interviews with Reuters, they said a media crackdown that began in the run-up to the July election of new Prime Minister Imran Khan had morphed into widespread self-censorship by journalists fearful of repercussions if they criticize Khan, the military or courts.
This is a modal window.

Islamists push religion to fore in Pakistan poll
A bumper crop of ultra-Islamist groups are contesting this week's Pakistan election, with the potential to reshape the political landscape of the nuclear-armed Muslim country of 208 million people. They're campaigning with anti-Western rhetoric and calls for strict interpretations of Islamic law.
A number of political commentators and opposition politicians say Khan is backed by the establishment, a term used in Pakistan to mean the military and intelligence top brass, along with some senior civil servants and judges. His main rival, former prime minister Nawaz Sharif, was at loggerheads with the military.
Adding to the atmosphere of fear is a treason case filed against a prominent newspaper columnist, Cyril Almeida, following an interview he conducted with Sharif that mentioned the role of Pakistani militants in the 2008 Mumbai terror attack.
“There is a culture of silence. People are reluctant to talk about who is behind this,” Islamabad bureau chief of independent Capital TV Murtaza Solangi told Reuters.
“Self-censorship has hit new highs.”
The Pakistani military’s public relations wing, the Inter-Services Public Relations agency (ISPR), denied intimidating the media and said it doesn’t pressure journalists to alter coverage.
“Our media is independent. ISPR has no role in controlling media expression,” the military agency said in a written response to several questions from Reuters on what the journalists described as intimidation and harassment by security forces.
The agency declined to elaborate further. Khan’s office did not respond to a request for comment, but during the election campaign, he dismissed reports of press intimidation.
Pakistan’s information minister Fawad Chaudhry told Reuters no media outlet has brought any complaints to his office. “I think Pakistani media freedom can be compared to any first world country,” Chaudhry said.
“There is more of a talk than substance … I have not received a single application or request or evidence of such censorship.”
A report released by the U.S.-based Committee to Protect Journalists (CPJ) last month alleged that Pakistan’s military was using fear and intimidation to stifle the media and undermine press freedom. “The military has quietly, but effectively, set restrictions on reporting: from barring access to regions … to encouraging self-censorship through direct and indirect methods of intimidation, including … allegedly instigating violence against reporters,” the CPJ said in the report, written after interviews with journalists, editors and media groups in five Pakistani cities in February this year.
The military has not responded to requests for comment on the CPJ report.
INFLUENCE JUDGMENT“There are debates within organizations about what can lead the organization into a problem and these discussions essentially influence your editorial judgment,” Talat Hussain, a journalist with Geo TV, Pakistan’s leading television news channel, told Reuters.
“The problem can range from … the channel getting shut down, to the business getting hurt by ad flow slowing down.”
The accusation of treason against the columnist Almeida is based on a May interview he conducted with Sharif in which the former prime minister indirectly suggested that Pakistan allowed militants based on its soil to carry out the 2008 militant attacks in the Indian city of Mumbai that killed 166 people.
Pakistan has long denied any state involvement but the incident has been at the centre of deteriorating ties with India. Sharif and Almeida both appeared before a court on Monday that will decide whether to formally charge them. Neither entered any plea and the case was adjourned until Oct. 22. A representative for Sharif did not respond to request for comment on this story.
Almeida and senior editors at the Dawn newspaper he works for declined to be interviewed, saying they had been advised by lawyers to avoid comment on an ongoing case.
DISAPPEARANCESWhile journalists have rarely been jailed in Pakistan, several instances of abductions of reporters have created a culture of self-censorship, journalists interviewed said.
“In general the media is being very careful in what not to report or discuss. If they do, they can face disruptions to circulation or to the placement of their channel on cable or at times a … blackout,” said Omar R Quraishi, former web editor at Samaa TV.
In June, Pakistani commentator, activist and frequent military critic Gul Bukhari was abducted by gunmen as she was on her way to a TV interview. A driver reported to the TV channel that men in military uniform stood by while plainclothes men took her away.
Bukhari, a dual Pakistani-British citizen, was returned home the next day after a social media and international media outcry. She declined to go into details of her ordeal, but told Reuters her abduction could be “viewed within that context” of intimidation ahead of the general election.
The military denied playing any role in her abduction. In January, Taha Siddiqui, a journalist known for critical reporting on the military, told reporters he narrowly avoided abduction after his taxi was stopped by armed men. He said he shouted for help when a military vehicle passed by but one of the armed men gestured to the vehicle to move on.
Siddiqui also filed a police complaint about the incident. The military denied it was involved.