Saying that he could terminate the provision of birthright citizenship by just signing an executive order, Donald Trump claimed a Constitutional amendment was not required to this effect. 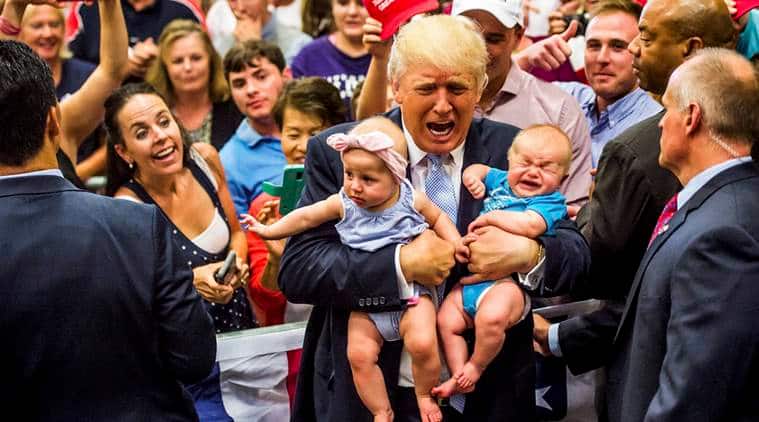 The president’s comments come amid a renewed push for hardline immigration policies before the midterm elections. (File)
Ratcheting up his hardline immigration views with a week to go before midterm Congressional elections, President Donald Trump has said he wants to end the constitutional right to citizenship for babies of non-citizens and unauthorised immigrants born in the United States. Trump made the comments in an interview with “Axios on HBO”.
Saying that he could terminate the provision of birthright citizenship by just signing an executive order, Trump claimed a Constitutional amendment was not required to this effect. “It was always told to me that you needed a Constitutional amendment. Guess what? You don’t,” Trump said in the interview.
Trump believes focusing on immigration will energise his supporters and help Republicans keep control of both the Hosue of Representatives and the Senate. “We’re the only country in the world where a person comes in and has a baby, and the baby is essentially a citizen of the United States … with all of those benefits,” Trump said. “It’s ridiculous. It’s ridiculous. And it has to end,” he added.
Trump said White House lawyers were reviewing his proposal. “It’s in the process. It’ll happen … with an executive order,” he said. Revoking birthright citizenship may spark a court battle over the president’s unilateral ability to change an amendment to the Constitution.
The 14th Amendment guarantees that right for children born in the US and the first line states, “All persons born or naturalized in the United States, and subject to the jurisdiction thereof, are citizens of the United States and of the state wherein they reside.”
Changing an amendment in the Constitution would require the support of two-thirds of the US. House of Representatives and the Senate and the backing of three-fourths of US state legislatures at a constitutional convention.
US Senator Chris Coons, a Democrat on the Senate Foreign Relations Committee, was quoted by Reuters as saying that Trump “was driving a false narrative on immigration” in many ways to stoke fear ahead of the November 6 vote.
A day earlier, the President said in an interview with Fox News that the government would construct tent cities to house migrants travelling through Mexico to the US southern border. The Defence Department also announced plans to deploy 5,200 troopers to the US-Mexico border by end of the week as a migrant caravan made its way north from Central America.
Publicado por salud equitativa en 5:47