His God, Her’s Too | The Indian Express

His God, Her’s Too | The Indian Express 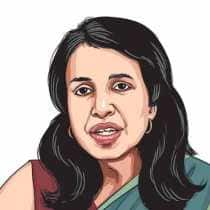 Ayyappa legends showcase him as pro-men, not anti-women
Madhavi Menon

His God, Her’s Too

Ayyappa legends showcase him as pro-men, not anti-women. There is no mention of clean men and unclean women in the legends surrounding Ayyappa. He is the god who encourages all devotees, regardless of caste and religion and gender. (Express photo by Vignesh Krishnamoorthy)
In the brouhaha surrounding the 4-1 majority verdict in Indian Young Lawyers Association and Ors versus The State of Kerala and Ors, one crucial fact has been missed — Ayyappa is a celibate god who enjoys the company of other men. His is not a patriarchal set-up in which women are oppressed in order to promote men. There is not a single mythological story to suggest that Ayyappa has anything against women, or that he considers menstruation unclean. The exclusion of menstruating women is an invention of priests who interpret male homosociality to sanction the worst strictures of patriarchy. Ayyappa is interested in men. So why is he being dragged into a battle about women?
Let us think more about this particular god’s desires, and the settings in which his legends have been produced. Ayyappa is a celibate god — this is the reason cited for not allowing women in the vicinity of his temple. The cited reason ties in with predictable and drearily misogynistic narratives about (a) menstruating women being unclean, and (b) women more generally being seductresses. But the legends surrounding Ayyappa have more to say about men than women. He is the son of two men — his father is Shiva and his mother is Vishnu (in drag as Mohini). He is the boon companion of Vavar — a Muslim sailor whom Ayyappa held dear to his heart. In fact, he is reported to have told his (earthly) father, king of Pandalam, to “consider Vavar as myself”. The pilgrimage to Ayyappa’s shrine at Sabarimala has to also take in the shrine to Vavar, built during Ayyappa’s lifetime. This is why the Ayyappa temple in Sabarimala is famous as a place of worship across religions and castes. Finally, Ayyappa is known as the god who wanted to abolish birth and death. If there is no death, then there is no need of birth, he reasoned, and so in one fell swoop, Ayyappa planned to do away with heterosexual copulation and reproduction. The gods got worried about this possible drop in their revenue, and so found a means of banishing him from the heavens back to earth, where he is still thought to reside.
Ayyappa is thus pro-men rather than anti-women. What stands out in the myths about Ayyappa is his opposition to heterosexuality rather than his misogyny. His all-male milieu does not preclude women — it simply does not evince sexual interest in women and, in fact, stipulates that men should not be sexually interested in women.
It is true that such a preference by a man for other men can be seen as an outcrop of patriarchal privilege — indeed, it is the basis of patriarchy that men conspire to keep women subordinated by not giving them equal access to opportunities. But there is a difference between an all-male club that supports and espouses heterosexuality, on the one hand, and that which commits to a decidedly non-heterosexual milieu, on the other. Historically, heterosexuality has proved to be far more misogynistic than homosexuality. Seen from this perspective, Ayyappa, in his headquarters in Sabarimala, presides over the possibility of a community of devotees removed from the pressures of heterosexual copulation and reproduction. How has this been twisted by priests to mean that women should be shunned by men as being unclean?
Far from a heterosexist insistence on the uncleanness of women, then, Ayyappa’s emphasis is on the non-heterosexual nature of (his) desire. What might it mean for men and women to live together non-sexually? Men mingling without fear of pregnancy? Women developing intimate bonds like the one between Mohini and Lakshmi? Four members of the bench that delivered the Sabarimala judgment were also judges who earlier read down Section 377, so one would hope they would be capable of thinking of desire in non-heterosexual contexts.
We need to stop thinking of sexual relations as occurring only between men and women (which is where the fear of a male god being seduced by a female devotee comes from). We need to remember that there is no mention of clean men and unclean women in the legends surrounding Ayyappa. He is the god who encourages all devotees, regardless of caste and religion and gender.
His only stated inclination is about sexual preferences. Women can be devotees of Ayyappa at all times and in all seasons. But we are not of sexual interest to the god. How liberating that is for women, especially in the age of #MeToo.
The writer is professor of English at Ashoka University and director of its Centre for Studies in Gender and Sexuality.
For all the latest Opinion News, download Indian Express App
More From Madhavi Menon