No is a complete sentence | The Indian Express

No is a complete sentence | The Indian Express 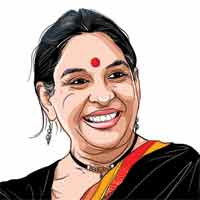 No is a complete sentence
Jaya Jaitly

No is a complete sentence

But sexual predators don’t get it. Because they draw on deep reservoirs of misogyny. The undermining of women stems from the same innate feeling of physical superiority and prowess that older societies easily acknowledged when men went out to hunt and kill, while the women looked after the hearth and home.
Facing up to what true equality looks like between two genders disturbs the equilibrium of the most enlightened of men. From the time a son begins to absorb the nature of relationships in his home, he learns that in most cases the father is the boss, even if he does a bit of the housework. The father’s voice is usually louder, people listen to instructions and orders from him more willingly, “do it or I will tell your father when he comes home”, is a threat often used by the mother, and boys don’t usually shout bossily at their fathers to find their socks or feed them when they are hungry. Nothing wrong in that, if it is a clearly accepted separation of powers and duties, but have we stopped to ask how “accepted” it is by the woman, or is it simply a situation that has been “understood”? The transition from boss to decision-maker to demanding submission is not a difficult one.
In the public field, it is widely understood that racists have a deeply entrenched contempt, if not hatred, of a particular race because of feelings of superiority and the knowledge that they possess the power to oppress them. Slavery, bonded labour, human trafficking, even prostitution, from the man’s point of view, are all areas in which a man has full power and control over the victim who is helpless and, therefore, bound to be submissive to survive.
The undermining of women stems from the same innate feeling of physical superiority and prowess that older societies easily acknowledged when men went out to hunt and kill, while the women looked after the hearth and home. Protection accorded by men to women obviously seeped into their collective psyches. This earlier consciousness has not yet been fully erased in this age of intelligence, technology, computers and labour-saving machines. Preference for non-violence and peace are the catchwords of an enlightened society. It is in this kind of society that women aspire to stand on their own feet, work as equals and be economically self- reliant, even while aspiring to have families of their own, looking aesthetically pleasing in their own eyes, and, retaining the special female qualities of gentleness and grace.
The tension between the existing world view of men and the promised land seen by women results in faultlines like those emerging out of the #MeToo movement. If one looks closely at the earlier presumptions of men and their responses to the new woman, one detects a common characteristic reaction. In the earlier scenario, men presumed they could be predators as it was their natural right, and entitlement, to demand and get what they wanted from a woman. Sex of course, but also washed clothes, hot meals, healthy sons and submissiveness. What happens when a man is faced with the new woman who believes she has a choice in the matter? He does not say sorry and back off, but uses force instead, because that is what has ultimately made him superior. His mind shuts itself off to the possibility of rejection.
Whether film directors, professors, corporate bosses or editors in all forms of media — all these men are in fields that are now attracting aspiring women who are smart, well-turned out and self-confident, and have certainly not planned to be submissive. When a man with predatorial instincts confronts someone like this, he often turns to undermining her in other ways because he cannot yet understand, as Jane Fonda, in a new Netflix documentary, Feminists: What were they thinking?, says, “‘No’ is a complete sentence”. The man has not yet learned that a woman can really feel and be equal to him, and that if she is not willing to give in to him in his sexual demands that does not mean she is worthless.
Interestingly, politics is not such an easy field for predators because it is usually confident, feisty and articulate women who venture into the political arena. There aren’t many cubby holes or instances of drunken partying. But here is where men with predatorial tendencies find ways of undermining the woman they know they cannot prey upon. During distribution of tickets, women are, generally, always considered “weak” candidates or put up as proxies for men. Men in most “equal” areas, even outside politics, expect women to look attractive and provide the tea at meetings. She is thus constantly reminded of her role as a housekeeper and as someone who must, as in the visual media, look attractive to the male eye. If she challenges a man publicly or even privately, she can be called “horseface” in front of the whole world as Donald Trump did of the stunningly beautiful Stormy Daniels.
If a man knows he cannot get his way with a woman because she feels “empowered”, he will isolate, ignore and undermine her by calling her anything from being a “favourite” (wink-wink), to the mistress-companion-girlfriend of someone in power, rather than acknowledge her capabilities. At social occasions, these predators will talk flippantly for a few moments, and with obvious lack of interest, with intelligent, serious women — if they are bound to, for courtesy’s sake, before moving off for more important conversations with men. All these subtle forms of woman-hating because they cannot accept them as intellectual equals or make them submit to physical advances cannot be termed as anything but closet misogyny.
The writer is former president of the Samata Party.
For all the latest Opinion News, download Indian Express App
More From Jaya Jaitly