Perhaps the biggest similarity and likely the one that initially gave rise to the comparisons between Bolsonaro and Trump is that neither man appears to measure his words. Jair Bolsonaro, far-right lawmaker and presidential candidate of the Social Liberal Party (PSL), arrives to cast his vote in Rio de Janeiro, Brazil (Reuters
Long before Sunday’s election that saw Jair Bolsonaro get 46 percent the vote in the first round of the presidential race, many observers flirted with the idea that the far-right congressman was a “tropical” Trump. Bolsonaro, who will now compete in a second round runoff on Oct. 28, presented himself as someone who tells it like it is while promising to dismantle a dysfunctional political system and seeking to capture the imagination of many citizens afraid of losing their place in an increasingly diverse and inclusive society.
While Trump and Bolsonaro have many differences _ before running, Trump was a billionaire businessman while Bolsonaro was long-time congressman with few legislative victories _ many tactics used in their campaigns were remarkably similar.
‘Straight talk’
Perhaps the biggest similarity and likely the one that initially gave rise to the comparisons between Bolsonaro and Trump is that neither man appears to measure his words. In the 2016 U.S. elections, Trump often billed himself as the man who wasn’t afraid to say what everyone else was thinking. Bolsonaro shares the same lack of filter. Some of the comments that have gotten him in trouble reflect longstanding ideological positions, like his repeated praise for Brazil’s 1964-1985 military dictatorship. Other comments may be more off the cuff and a wink at his reputation for shunning the “politically correct,” like when he told an audience that he had a daughter “in a moment of weakness” after four sons. Both men “enjoy being outrageous and making statements for shock value,” said Paulo Sotero, the director of the Brazil Institute at the Wilson Center think tank in Washington.
Bash mainstream media
Bolsonaro and his three oldest sons, who are also politicians, have hammered away at Brazil’s main media organizations, accusing them of everything from telling outright lies about the candidate to ignoring his rise in the polls and endorsements from other politicians. Like Trump, they accuse the media of propping up the country’s traditional elite and of trying to derail a campaign that might threaten it. Carlos Bolsonaro, who is a city councilman in Rio de Janeiro, recently tweeted that the media and a major pollster “ignore growing rallies in favor of Bolsonaro, including in the farthest corners of Brazil, and they try to create a narrative of Bolsonaro’s stagnation (in the polls). They really believe the population is blind and stupid!”
Social media messaging
For candidates who don’t trust the media, social networks provide the perfect outlet. Bolsonaro, like Trump, has made heavy use of Twitter and Facebook to talk directly to voters. That became especially important after the candidate was stabbed on Sept. 6 and confined to the hospital for more than three weeks. Last week, even after being released from the hospital, Bolsonaro skipped the most important televised debate on major network Globo, citing his doctors’ orders. Instead he held nightly Facebook live sessions with political allies and did interviews with friendly stations. “The idea that you would skip the debate on health grounds but then have three 10-minute interviews with a friendly TV networks is very Trumpian at its core,” said Matthew Taylor, associated professor of Latin American politics at American University, adding that for both men such a heavy reliance on social media helped them overcome initial resistance to their candidacies. 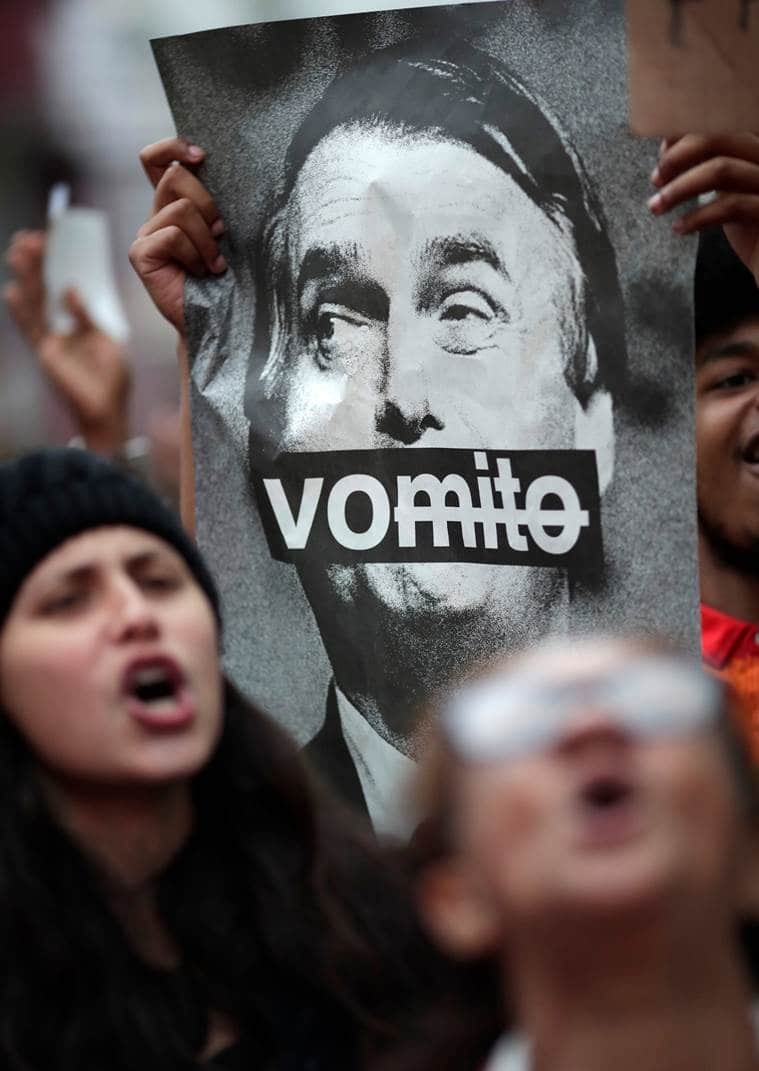 A demonstrator shows a picture of Brazilian presidential candidate Jair Bolsonaro, that reads: “Vomit” during a protest against him at Paulista Avenue in Sao Paulo, Brazil (Reuters)
Floating fraud
Bolsonaro has raised the specter of fraud and said it could rob him of the election. A week before the vote, he told a television station he would not accept any result but his own victory, implying that the size of support he had seen at street rallies indicated he would win, even though the polls were close. A few days later, he backed off those comments, saying he would accept the election results but wouldn’t call his rival to concede. Sound familiar? Trump trod a very similar path. “Bolsonaro is essentially saying, `Fairness means that I win. Anything else is fraud,”’ said Jason Stanley, author of “How Fascism Works: The politics of us and them.”
Use of proxies
Similar to how Trump’s campaign had Donald Trump Jr. and other children sometimes speak for their dad, Bolsonaro has often depended on his three eldest sons to float ideas, deny critical press reports and make outlandish claims. The latest example: On Sunday, while Brazilians were going to the polls, Flavio Bolsonaro, who is running for the senate, shared a video on Twitter that purportedly appeared to show a voting machine that had been tampered with. Within hours, the country’s electoral court announced that it was a false report. However, by then it had surely been seen by millions of people on Twitter and the messaging group WhatsApp. “The technique is to use people who speak for you but don’t speak for you,” said Taylor. “Trump or Bolsonaro can always say, `I didn’t or would never say that.”’
For all the latest World News, download Indian Express App
Publicado por salud equitativa en 6:23