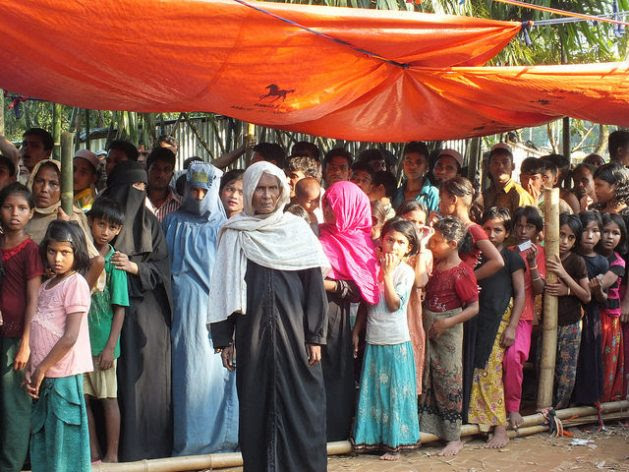 Rohingya refugees in Bangladesh wait in limbo. Credit: Naimul Haq/IPS
WASHINGTON DC, Mar 12 2018 (IPS) - The UN High Commissioner for Refugees has a tall task: deliver a “Global Compact for Refugees” to the United Nations’ General Assembly by the end of 2018.
The release of a “zero draft” – which will be discussed at a second round of negotiations beginning March 12 — should hearten advocates. Of course, the final version is still many months of hard negotiations away. But the mere existence of the draft—at a time when refugee crises are growing in complexity, severity and number—is testament to the UN’s strong will.
Such a document must not only detail how to help refugees, it should attempt to understand the root causes of migration, and describe how world leaders might begin to reduce the pressures that drive people from their homes.
It is great, then, that there is at least some attention in the “zero draft” to environmental degradation as one of the root causes of migration. Environmental degradation leads to human deprivation, and, often, to displacement.
Nevertheless, as decision-makers review the draft, they should consider 3 ways it can better incorporate this analysis into the text.
More Discussion of Root Causes
Just look at how little real estate is dedicated to root causes. Too few of the 24-page document’s 11,500 words address environmental pressures that contribute to displacement and migration. “Environment” only comes up 8 times—and two of those uses have nothing to do with natural resources.
Many analysts expect climate change to be the major driver of migration in the 21st century. Already it places pressure on populations, both directly—through drought, for example—and indirectly, as a contributor to conflict. Yet “climate” gets only 5 hits.
The result is even worse for “food”: just one mention, and that only in context of access to food during detention. How can a global compact on refugees do so little to outline why people leave their homes in the first place?
Who Is Accountable?
While there are some pretty phrases, it is entirely unclear “who does what” to achieve the intended outcomes on environmental stewardship.
The document does encourage “investment in programmes that accelerate fulfilment of the Sustainable Development Goals to minimize the adverse drivers and structural factors that compel people to leave their country of origin…including climate change.” But it is not clear who will invest, through which institutions, and where.
Next Steps Need to Be Clearer
There are scant references to environmental challenges. But, even worse, there is an action plan without any action.
The “Actionable Commitments,” captured in 22 Objectives, contain no deadlines; in the Implementation and Follow-Up and Review sections, the environmental (and other) pressures are no longer mentioned. Neither is a plan for monitoring progress on these pressure points.