Print | Send by email
Joaquín Roy is Professor Jean Monnet and Director of the European Union Center at the University of Miami
MIAMI, Mar 14 2018 (IPS) - It is revealing that a ruler who did not serve in the military, nor enjoys any experience in war affairs, has a special inclination to use a vocabulary more typical of bloody clashes between states than in diplomatic relations.
Donald Trump, both in his electronic messages and in his television addresses, adores the use of military terminology to illustrate his plans. He likes the word “war” to label his government program.
Curiously, almost as a prelude to the surprising and apparent truce that can be put in place with North Korea, Trump has made a declaration of war “Urbi et Orbi”. The first salvo has been the announcement of the imposition of tariffs on imports of steel and aluminum. In addition, he has presumed the qualification that trade wars are good.
The alarm that has generated this decision has been widespread, with the threat of widening the ground to other products. The statements of response from the rest of the planet oscillate between perplexity and the start-up of protective measures of their business partners, friends and foes. 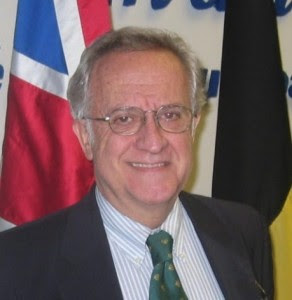 Joaquín Roy
Although Trump announced that his close neighbors, Canada and Mexico are forgiven, neither Trudeau nor Peña Nieto  trust him at all.
If mutual reluctance on both shores of Rio Grande is a permanent dressing of history, the apparent loyalty between Washington and Ottawa suffers from question marks that only the permanently installed courtesy barely manages to mask.
Trump has succeeded in having the Mexicans pass on to the Canadians the lamentation attributed to Porfirio Díaz: “Poor Mexico (Canada), so far from God and so close to the United States.”
The tottering NAFTA alarmed both partners and not even the promise of an improvement in conditions have managed to clear the threat of its disappearance.
That is why the Canadians have endeavored to solidify the agreement with the European Union, just as the Mexicans have reinforced their own alliance with the EU, the strongest between Brussels and the Americas.
The truth is that Trump’s tactic has confirmed his personal refusing of trade agreements and regional block alliances, stressing the option of unilaterality as a primordial strategy, presided by the claim of “America, first.”
And not only is that such decision is obvious, but the language used is the one of confrontation, as a springboard to victory, cemented on the argument of superiority.
If the European Union and China opt for retaliation with the imposition of tariffs on US products, consumers in Alabama, Ohio, and North Dakota, in addition to the classic Trump voters in Appalachia, will need to adjust the shopping cart. Perhaps this matters little to his family and wealthy Fortune 500 owners who have populated his administration, but those who depend on a salary at the end of the week will not be happy. They'll thank him in the election

But the arsenal of the American president’s decision is not reduced to his personal conception and ill-disguised arrogance, but also hides a weakness and fear of losing re-election.


In spite of the opposition of his wife Melania, Trump is not resigned to disappearing from the reduced political map to enjoy a solitary four-year mandate.
It would be like descending to the level of Carter and Bush Sr, who were ousted by their opponents. Trump needs more help than his millionaire donors.
He needs the little people who raised him to victory. He needs those who believe in the imposition of tariff rates and the construction of walls, more convincing than the one that seeks to raise before Mexico.
They naively will vote again under the promise of job creation. In the event that he succeeds in his strategy, Trump will probably be slapped by history.
He will remember that among the failures of the imposition of tariffs, executed as the simple squeezing of the trigger in a Western, often results in a shot on the foot.
Historians still explain the case of the Smoot-Hawley decision, imposed in 1930. Instead of softening the effects of the Great Depression of the late 1920 ‘s, it reduced US exports by 61%.
In an effect on the other side of the Atlantic, some experts even argued that the unfortunate decision helped the emergence of Nazi Germany and other Fascist niceties, in some countries hit by the growing economic war that preceded the bloody confrontation.
If the European Union and China opt for retaliation with the imposition of tariffs on US products, consumers in Alabama, Ohio, and North Dakota, in addition to the classic Trump voters in Appalachia, will need to adjust the shopping cart.
Perhaps this matters little to his family and wealthy Fortune 500 owners who have populated his administration, but those who depend on a salary at the end of the week will not be happy. They’ll thank him in the election.
While it may be true that some practices of US partners and competitors are not exactly fair, the method that the most reasonable advisers suggest is negotiation and brokering within the World Trade Organization (WHO).
Although Trump has heard that “war is the continuation of politics by other means”, Carl von Clausovitz himself could remember with the logic of realism that in the end no one wins the wars and that many lose them. Trump may be a collateral casualty of “friendly fire.”
The author can be reached at jroy@miami.edu