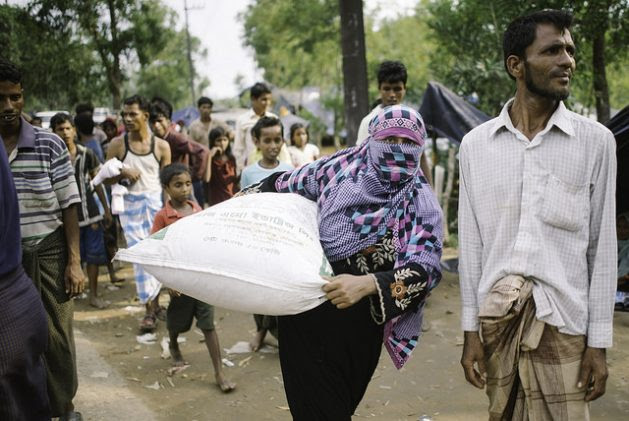 A Rohingya refugee woman carries relief supplies to her makeshift shelter. Credit: Umer Aiman Khan/IPS
UNITED NATIONS, Mar 14 2018 (IPS) - In the wake of persistent violence against the Rohingya community, UN officials have expressed growing fears that genocide is being incited and committed in Myanmar.
Since violence renewed in Myanmar’s Rakhine state in August 2017, almost 700,000 Rohingya Muslim refugees have fled to neighboring Bangladesh.
Often arriving to limited food and shelter, refugees have brought with them stories of serious human rights abuses including extrajudicial killings, sexual violence, and the deliberate burning of entire villages.
“I am becoming more convinced that the crimes committed following 9 October 2016 and 25 August 2017 bear the hallmarks of genocide and call in the strongest terms for accountability,” UN Special Rapporteur on human rights in Myanmar Yanghee Lee told the Geneva-based Human Rights Council.
She expressed concern that the “repressive practices of previous military governments were returning at the norm once more.”
Spreading Hate through Social Media
Lee highlighted the toxic use of social media to incite violence and particularly pointed to the role of Facebook in spreading high levels of hate speech against the Rohingya minority in the Southeast Asian nation.
“Everything is done through Facebook in Myanmar…it was used to convey public messages but we know that the ultra-nationalist Buddhists have their own Facebooks and are really inciting a lot of violence and a lot of hatred against the Rohingya or other ethnic minorities,” she said.
A UN fact-finding mission also recently found that social media had a “determining role” and was “substantively contributing” to the violence in Myanmar.
Most recently, Facebook suspended the account of Buddhist monk Wirathu who is known for his nationalist, anti-Muslim messages particularly disseminated through social media.
Though he has denied fueling violence in Rakhine, Wirathu recently claimed that the state was experiencing “terrorism of Bengalis,” a label implying that Rohingya are from Bangladesh rather than Myanmar.
“I’m afraid that Facebook has now turned into a beast,” Lee said.
A Systematic Removal
Having been denied access to the country, Lee presented a report to the council this week based on her visits to neighboring countries of Bangladesh and Thailand which revealed the extent of Myanmar’s human rights violations.
Among the issues raised by refugees, the Special Rapporteur was especially saddened by the targeting of Rohingya children.
She estimates that at least 730 children under the age of five were killed in the first month of violence alone.
While approximately 60 percent of the refugee population is children, the UN estimates that up to 200,000 children are still in Rakhine.
Earlier this month, the Office of the UN High Commissioner for Human Rights (OHCHR) found that Rohingyas who try to leave their villages “are taken away and never return” and found a “recurring theme” of women and girls being abducted.
The agency also found an ongoing systematic campaign of “terror and forced starvation” which are forcing Rohingya out of the country.
In a recent report, Amnesty International reported that forces are bulldozing land and building military bases where Rohingya villages were burned down.
Not only does this prevent refugees from returning, but it also hides authorities’ crimes.
“The bulldozing of entire villages is incredibly worrying. Myanmar’s authorities are erasing evidence of crimes against humanity, making any future attempts to hold those responsible to account extremely difficult,” said Amnesty International’s Crisis Response Director Tirana Hassan.
This has raised concerns for both Amnesty International and the Special Rapporteur over the Bangladesh-Myanmar arrangement to repatriate Rohingya refugees as they will return to find their homes gone and face continued discrimination.
“No one should be returned to Myanmar until they can do so voluntarily, in safety and dignity – something that is clearly not possible today,” Amnesty International said.
Accountability for Peace
In light of Myanmar’s denial that any atrocities were committed, UN High Commissioner for Human Rights Zeid Ra’ad al-Hussein, who also suggested acts of genocide may be taking place, called for the case to be referred to the International Criminal Court (ICC).
“What we’re saying is…there are strong suspicions, yes, that acts of genocide may well have taken place. But only a court, having heard all the arguments, will confirm this,” he said.
In her report, Lee urged for steps towards accountability in order to bring long-lasting peace and stability in Myanmar.
“This must be aimed at the individuals who gave the orders and carried out violations against individuals and entire ethnic and religious groups…the government leadership who did nothing to intervene, stop, or condemn these acts must also be held accountable,” she told the Council.
Lee called for an impartial and comprehensive investigation not only in Myanmar, but also into actions by the UN system in the lead-up to and after the reported attacks in 2016.
“The external review should assess whether the UN and international community could have prevented or managed the situation differently,” she said.