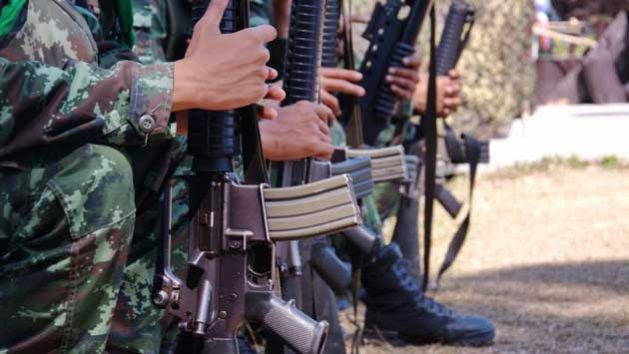 Armed for battle. Credit: SIPRI
UNITED NATIONS, Mar 13 2018 (IPS) - In most military conflicts worldwide, the ultimate winners are not one of the warring parties– but the world’s prolific arms traders, described by peace activists as “merchants of death”.
While fighting keeps escalating, the hunger for conventional weapons continues unabated, as exemplified in several ongoing battles.
The conflicts include the six-year civil war in Syria where multiple warring factions are being armed either by the US, Russia or Iran; the three-year armed conflict in Yemen where American weapons are being used indiscriminately by Saudi Arabia, mostly against civilians; and the simmering 50-year old Israeli-Palestinian conflict which has transformed the heavily-armed Jewish state into a formidable military power described as far superior to the collective might of all the Arab states put together.
And arms are also pouring uninterruptedly into Egypt, Libya, Lebanon, Iran, India, the United Arab Emirates (UAE), Qatar, Kuwait, Afghanistan and Pakistan.
The world’s five major arms suppliers include the four permanent members of the UN Security Council (UNSC) – namely the US, Russia France and China– plus Germany (which is engaged in a longstanding battle for a permanent seat in the UNSC). Together, these five biggest exporters, have accounted for about 74 per cent of all arms exports during 2013–17