Only Paens, No Answers | The Indian Express

Only Paens, No Answers | The Indian Express

Only Paens, No Answers

BJP’s defence in the NaMo app controversy is toothless, and laughable 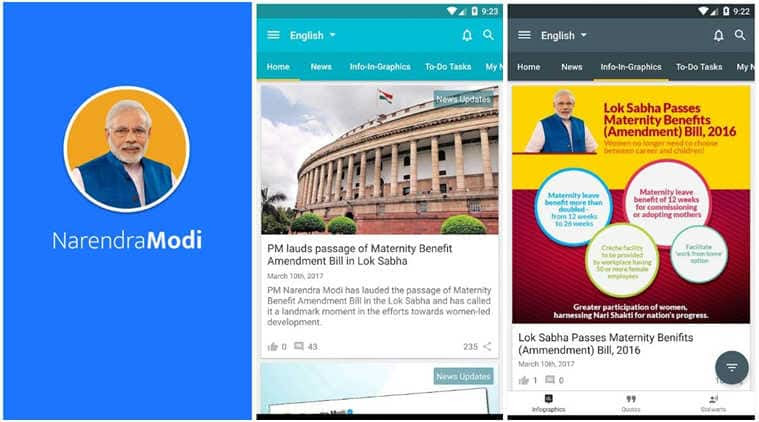 The NaMo App asks for permissions to take pictures, videos, read contacts, access location, record audio, read identity and phone status among other things.
The BJP was one of the first Indian political parties to venture into the digital and social media space. Now, when the tables have turned, it is but natural for the party to fumble when a strengthened Congress asks it pointed questions over its delinquencies with data. With the Cambridge Analytica (CA) expose hogging headlines, the BJP has a lot to explain. Perhaps, Amit Malviya, its social media head who wrote about the Narendra Modi App in this newspaper on March 26, would like to do some of the explaining.
To start with, how would Malviya explain the fact that Himanshu Sharma, one of the directors of Ovleno Business Intelligence, the Indian arm of CA, proudly described on his LinkedIn Profile page, that he had managed “four election campaigns successfully for the ruling party BJP” and had “achieved the target of mission 272”. Why has Sharma deleted this from his LinkedIn page now? Does the BJP have anything to do with it? Further, if it is true that the BJP engaged the services of CA in the 2014 campaign, then does it also condone the company’s “dirty electioneering”. Does it also mean that the BJP, in some measure, benefited from the same “dirty tricks” in the last general election? As for the canard that the Congress had roped in the company’s services, the party has time and again expressly denied such rumours, and I would like to use this space to reiterate that the Congress party hasnothing to do with CA.
The section of the Congress party’s website that Malviya quotes in his articles clearly mentions that we may share information with vendors, consultants etc., but as Malviya himself writes, these vendors maybe as generic as Google Analytics — which the BJP also uses — and this is perfectly routine practice for all websites. This information is used for the sole purpose of enhancing and customising user experience on the website; it is nothing out of the ordinary, as Malviya himself confesses. The NaMo app, by his own admission, does the same thing. Therefore, one does not know why this fig leaf of an allegation would be employed by the BJP’s social media head to counter serious allegations against practices institutionalised by the NaMo app.
One read Malviya’s article to find some genuine answers to the growing questions over the data security measures of the NaMo app. Alas, other than singing paeans to Dear Leader, and extolling the many “virtues” of his digital outreach, one didn’t find much to take home from Malviya’s hosanna published in this paper. Therefore, I take this opportunity to remind him of the undeniably serious allegations against the NaMo app’s acrobatics with personal data. It is worth reminding him that the app asks for 22 permissions (all possible), when a user is trying to sign up — the highest number amongst apps in its category.
As reported by this newspaper, the PM’s app asks for permissions to take pictures, videos, read contacts, access location, record audio, read identity and phone status among other things. Therefore, to call the Congress president’s tweet referring to the same an “absurdity” is a classic example of Malviya’s daily dose of hypocrisy — an art he seems to have perfected over his years in the BJP. Can he expressly deny that the PM’s app sends user data to a US-based firm? If not, then can he explain why?
To counter this allegation by raising the issue of a long-defunct Congress membership app is an exercise in drawing false equivalences. The app in question was removed because a certain data security researcher and sections of the media had misled people into believing that the Congress was enrolling members through the said app. Our membership drive is run only through the Congress website. Every digital property that the Congress has, has been built in-house. The data is safe, secure, encrypted, and is stored within the organisation. We have never shared such information with anyone else. To put it rather unambiguously, we were forced to remove the app to clear the air and the BJP’s social media head conveniently forgot to mention this part.
Certainly, Malviya can do much better than this.
The writer is chairperson, social media and digital communications of the Congress
For all the latest Opinion News, download Indian Express App
More From Divya Spandana