The High Court’s observations on the EC have cast a shadow of doubt over the impartiality of the body. Yet another institution appears to have been compromised by the Narendra Modi government. 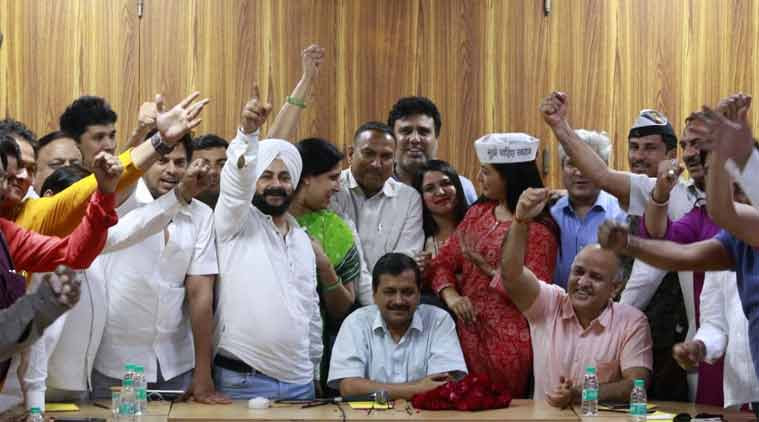 AAP MLAs with CM Arvind Kejriwal after the Delhi High Court’s order.
The Delhi High Court’s verdict setting aside the Election Commission’s order disqualifying 20 Aam Aadmi Party MLAs is a huge victory, not just for the party, but also for the lakhs of Delhi’s voters who had elected their representatives to the Delhi Assembly in 2015. The verdict restores faith in the fact that the excesses of the executive will still be checked by the judiciary, and our Constitutional safeguards against dictatorial rule are still in place.
The circumstances under which the EC had given its opinion to the President are worth remembering: the order came on the last working day of the then Chief Election Commissioner AK Joti, who was once the Secretary to former Chief Minister of Gujarat Narendra Modi. As soon as the EC made its recommendation, the AAP had sought an audience with the President to convey to him that the MLAs had not been heard by the EC, and therefore he must not sign the order.
Unsurprisingly, he could not meet the AAP delegation. Within 24 hours of receiving the opinion, the President read the 132-page document, applied his mind on it and signed the order of disqualification, on a Sunday!
Today’s verdict may have named just the EC, but the real indictment is of the Central government. It is the current dispensation that appointed a terribly biased set of Election Commissioners to begin with and followed that up by advising the President to sign an illegal order. It is a matter of shame that a Presidential order had to be set aside by the High Court.
While today’s decision does give us reason to celebrate, the Court’s observations on the EC have cast a shadow of doubt over the impartiality of the body. Yet another institution appears to have been compromised by the Narendra Modi government. The High Court has unequivocally called out the EC for its ‘failure to comply with principles of natural justice’.
The EC was not merely incorrect in its interpretation of the law on office of profit, but wilfully denied the MLAs an opportunity to defend themselves in the case. In effect, this means that the actions of the EC were patently mala fide. It is a worrying sign for our democracy that the body that is mandated to ensure free and fair elections has been found guilty of denying voters the elected representatives of their choice.
The disqualification of AAP MLAs was only the latest of the several ways in which the might of the Central government has been misused to destabilise Delhi’s elected government. The High Court’s observations in this matter confirm the fact that the onslaught against the party and the Delhi government is by design.
The arrest of 15 MLAs under various pretexts, CBI raids against half of the Cabinet, Income Tax notices to the party — the government withstood every attack. The disqualification of MLAs and the subsequent bypolls was supposed to be the last nail in the AAP coffin. Clearly, this attempt has also failed, thanks to the intervention of the Court.
The indictment of the three Election Commissioners who were signatories to the illegal order should ideally have prompted their stepping down or immediate dismissal. But since this Government is immune to feeling moral obligations of any kind, that might be too much to expect.
However, now that the EC has been asked to hear the matter afresh, the incumbent Commissioners will have to choose which side of history they wish to be on. Will they continue to be instruments in the hands of an oppressive government or will they defy the wishes of the government and hear the case without prejudice?
The Court has given the EC an opportunity to redeem itself and establish its credentials once again as the impartial Constitutional body it is meant to be.
Atishi Marlena is a senior leader of Aam Aadmi Party and an Advisor to the Government of NCT of Delhi. Views expressed are personal. She tweets @AtishiMarlena
For all the latest Opinion News, download Indian Express App
© IE Online Media Services Pvt Ltd
More From Atishi Marlena