A massive wound to the heart of the Amazon 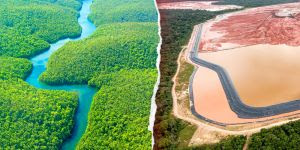 A powerful multinational wants to build a gigantic open pit gold mine right in the heart of the Amazon. But local indigenous tribes are fighting back, and a federal court just revoked the license. If we can get the top investor behind the project to pull out, we could help stop this ecological nightmare. Let’s stand with the guardians of the Amazon:

Brave indigenous tribes are fighting a Canadian mining giant that plans to open a toxic gold mine in the heart of their sacred Amazon lands! One tribe is facing extinction if this disaster goes ahead -- now grassroots groups are asking for our help!

The mining company is close to getting all its permits -- but the tribes have managed to delay the project through the courts. Now, mounting losses are putting pressure on investors to pull out.

This is our moment to strike.

Experts say the mine's top investor, Agnico Eagle Mines, cares about its international reputation as a sustainability leader. If one million of us call them out for this project, and deliver the petition to shareholders at their annual meeting in weeks, we could be the game-changer to end this insane venture.

Add your name to stand with the guardians of the Amazon

If the mine goes ahead, they'll need to build a dam too -- to hold a mountain of chemical waste twice the size of Rio's iconic Sugarloaf. In 2015, a similar, smaller structure broke, leaking the equivalent of 20,000 Olympics pools of toxic sludge into the rivers and ocean, killing 19 people. And now the same engineer who said that dam was "100% safe" is in charge of this mine's safety report!

This region is home to 9 indigenous tribes, and hundreds of traditional communities. One of the tribes only recently made contact with "modern civilisation” -- now they're stepping out to fight for their survival!

Agnico has huge leverage. If they pull out, the project is dead. But they're operating under the radar and without public attention they'll keep funneling money into the project. A million pairs of eyes drilling into them now can convince them to give up.

Let’s welcome shareholders to their annual meeting in Toronto with a hard-hitting campaign, show them the disastrous nature of the project they're backing, and push them to drop it for good. Sign and share:

Add your name to stand with the guardians of the Amazon
From Europe, to South America, Africa to Asia, our movement has stood with indigenous peoples and local communities to protect our planet’s treasures against powerful corporations and mega-projects. Let's do it again for the Amazon!

Despite the damage caused by the Belo Monte Dam, the government of Pará approved a license for the biggest gold mining project in the same region. (Environmental Justice Atlas)
https://ejatlas.org/conflict/belo-sun-mining-project-brasil