Arab, religious, insular, and distrustful of the Israeli state. 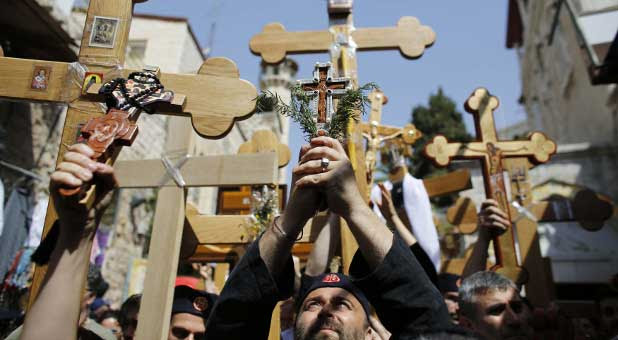 A few months ago I reported on the Pew Research Centre’s report on Israel entitled “Israel’s Religiously Divided Society” (see here and here). In those posts I largely looked at the differences in religious practice and political views between Israeli Jews and Israeli Arabs. This discussion largely divided the population into Muslims and Jews and subsumed the very small Druze and Christian minorities. Today, I thought that I would revisit the report by drawing out some of the interesting views of the Israeli Christian community.
Christians are very small part of the Israeli population of about 8 million. Only 2% of Israel’s adult population are Christian, a lower percentage than even the Middle East-North Africa region’s average of 4%. (Druze also make up 2% of the Israeli population, while 1% are neither Jewish, Muslim, Druze or Christian.) Despite its small numbers, the Christian community in the country in which Christ lived and died and rose again is of special interest. So what is interesting in the Pew Centre Report?
“A large majority of Christians say all (21%) or most (65%) of their close friends are Christian. Christians also are almost universally married to other Christians, and they are uncomfortable with the idea of their child marrying a Muslim or Jew. Roughly nine-in-ten Christians say they would be ‘not too’ comfortable (9%) or ‘not at all’ comfortable (79%) with their child marrying a Jew, and eight-in-ten (80%) say they would be uncomfortable if a Muslim married into the family.”
- See more at: http://www.mercatornet.com/demography/view/israels-christian-community/18098#sthash.LMqmUtJr.dpuf

One day it was about a handful of individuals who had sexual identity problems; the next, it was about the US federal government telling schools they had to let boys into the girls' toilet block. How did transgenderism (and it really is an ism) come up on us so fast? What is driving this issue?
That is the question we put to some scholars and today we begin publishing their answers. Professor Mark Regnerus puts it down to marketing, and specifically to "framing" of the issue as an urgent human rights one. Marketing takes money, of course, but the LGBT movement seems to have pots of that.
One thing is clear: if anyone thought the sexual revolution was something that happened in the 1960s, they are sadly mistaken. What it's ultimately about is the subject of Stella Morabito's very perceptive article. Her concluding advice is something I agree with and am newly resolved to practise more consistently: never to use the word "gender" when we really mean "sex".
There's a cute video from The New Yorker on the front page -- about social awareness in the Facebook generation.
Enjoy, and see you Monday.