By their government and by James Cameron! 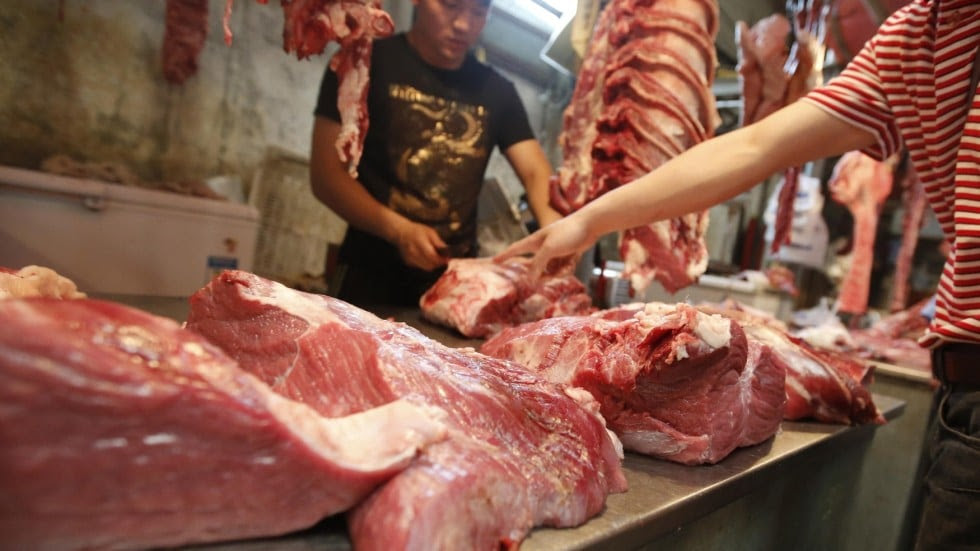 In 1982, the average Chinese person ate 13 kg of meat a year. (Aside one: does anyone pronounce the word “et”? I have heard a couple of people pronounce it that way and it does sound English, posh, and maybe a 'little pretentious. Therefore it appealled to me and I've tried to emulate it, but I have to admit it does sound a little funny...what are our dear readers' thoughts? “Et” or “eight”?)
At that time in the Middle Kingdom (the early 1980s) beef was referred to as “millionaire's meat” due to its rarity. (Aside two: I grew up on the outskirts of a small town in the North Island of New Zealand. My parents owned about 20 acres and ran a dozen cows and about 100 sheep. They slaughtered the remaining cattle beasts over time as they moved to selling the land off. I remember cooking a very gourmet meal for Shannon when we were dating – probably mince and rice and frozen vegetables – and telling her afterwards that that had been the cow we had met a few weeks earlier when visiting my parents. She was not overly impressed. Having grown up on a (small) farm, I couldn't see what the problem was. But apparently previously introducing your beloved personally to her meal is not the done thing. Young men, take note...)
Where was I...? Oh yes. Fast forward 35 years and the average Chinese person (of whom there are about 350 million more) eats 5 times as much meat – 63 kg a year. (The average American or Australian eats about twice as much meat per person. China sits behind more than a dozen countries in the per capita meat consumption league. However, because of its sheer size, China consumes 28% of the world's meat consumption and half of its pork.) If current trends continue, then the average Chinese person will eat 90kg by 2030.
However, the Chinese Government is trying to halt that trend. It has outlined a plan to reduce its citizens' meat consumption by 50%. New dietary guidelines have been drawn up by the Chinese Health Ministry which recommends that each person should eat between 40 and 75g of meat per day. (16.5 – 25.5kg per years, ie less than half the current level of consumption.) These measures are designed to improve public health (the country has a growing obesity and diabetes problem) and are released every 10 years. It does not appear that these guidelines are binding since the guidelines come with a series of new public information advertisements encouraging Chinese to eat less animal flesh. These advertisements even include Hollywood luminaries Arnold Swarzenegger and James Cameron in them.
“Why?” You might be asking. Not because they particularly care about putting poultry farmers in China out of business, but because of climate change. You see, 14.5% of the world's planet-warming emissions come from the keeping and eating of cows, pigs, chickens and other animals we eat. This is more than the entire transport sector. Not only do livestock emit methane, but land clearing and fertilizers release large quantities of carbon. If these new guidelines were followed, then carbon dioxide equivalent emissions from China's livestock industry would be reduced by one billion tonnes in 2030. And we've already talked about the effect of turning off meat on our ability to feed a larger global population.
However, whether the Chinese will listen to the guidelines is another matter. The rising middle classes are avid meat eaters and there are also strong cultural traditions attached to the eating of many animals, especially pigs. I do wonder if the Chinese government's guidelines will resemble King Cnut in the shallows: trying to keep back a tide of delicious meateness.

Everyday mums and dads are not the only people to be alarmed by the rise of transgenderism. As Zac Alstin points out, some gays and lesbians believe that transgender ideology is "actually hostile to the goals of women and gay men". They want LGB and T to go their separate ways. What is going on here, Zac asks:
"Isn’t LGBT supposed to be all about tolerance, acceptance, affirmation, love and rainbows? LGB and Transgender people stand together because they are both victimised minorities. But what happens when one victimised minority feels victimised by another?"