And how many Icelanders are supporting their team. 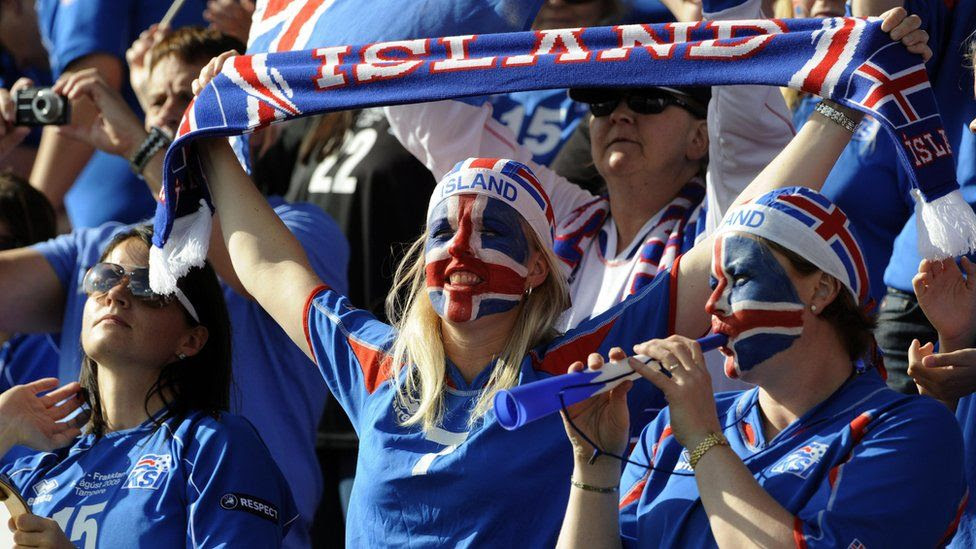 There are twenty four national teams competing at this year's UEFA EURO football championship currently being held in France. They are divided up into six groups of four. Group F consists of Hungary, Portugal, Austria and Iceland. The current FIFA standings show that Iceland is very respectably placed at 34th in the world (out of 209 nations). This is its first ever appearance at a EURO championship and its fans are flocking to France to support their team. According to the New Zealand Herald, nearly 27,000 Icelanders have tickets to watch their team play in France.
"This is all very interesting, but what on Earth does this have to do with the price of fish?" I hear you ask. Apart from the fact that I thought you might be interested in a fairly large football/soccer tournament, there is a point to this fixation on Iceland. Although all of those facts about Iceland's football team were respectable, they become astounding when one places them in demographic context. Iceland has a population of around 330,000 (the same as the capital city of New Zealand, or half the population of the District of Columbia). That means that those 27,00 Icelanders who have bought a ticket to watch their team play in France represent around 8% of all of Iceland's population. 8%! Can you imagine how great it will be driving on Iceland's roads during this time? The entire island must feel eeirely quiet during the next couple of weeks. Now, wouldn't it be great if Iceland can win the whole thing?? (They've already beaten the Dutch in qualifying play and have drawn with the much-fancied Portuguese in their first Euro 2016 match...)

The crescendo of argument in Britain about "Brexit" was quietened today following the tragic death of MP Jo Cox from injuries inflicted by a crazed attacker screaming "Britain first!" Two months ago Mrs Cox spoke eloquently in parliament  in support of putting people first -- the thousands of refugee children arriving in Europe separated from their parents. We have quoted her speech as a tribute and a reminder that behind every statistic there is a name, a family and a story.
Co-incidentally, we have two other articles about Britain. Austen Ivereigh reminds us that the European Union was "a Catholic plot, of sorts.
"The main architects of the 1958 Treaty of Rome were Christian Democrats devoted to Catholic Social Teaching, who wanted trade to make European war impossible, solidarity to improve the lot of workers, and subsidiarity to strengthen civic institutions and grassroots democracy."
The score at this stage looks like one -- or perhaps two -- out of three. I doubt that civic institutions and grassroots democracy have been strengthened anywhere in the last 50 years. As for workers - what do you think?
My piece looks at the decision of the new Mayor of London to ban "body shaming" advertisements from the city's public transport system. Although Sadiq Khan is a Muslim, the move seems to have very little to do with "Muslim values".
Happy Father's Day to all the dads who are being celebrated this weekend!