MercatorNet: The real story behind the Pope’s controversial remarks on invalid marriages

MercatorNet: The real story behind the Pope’s controversial remarks on invalid marriages

He’s just being realistic about widespread lack of commitment 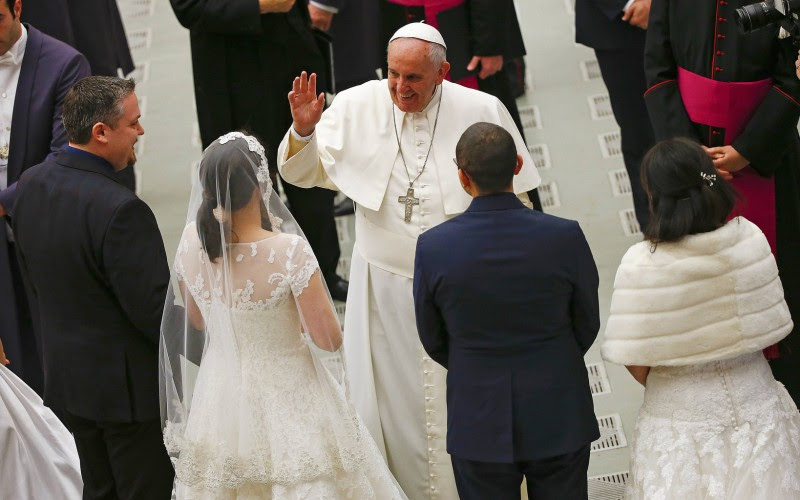 Ross Douthat, the conservative, Catholic columnist for the New York Times, was spitting chips last week. In the middle of one of the most volatile presidential campaigns in living memory, he took time out to compose 20+ tweets about Pope Francis. They were not complimentary. “Extraordinary, irresponsible and ridiculous” was a typical outburst.
The issue was an off-the-cuff comment made by the Pope after his opening address to the Ecclesial Congress of the Diocese of Rome, on June 19. According to media reports, he said that most Catholic marriages are in fact null because the spouses are incapable of committing themselves for life.
This is not really a fair summary of his words, but they sparked so much criticism in secular and even in Catholic media that they do beg for some background and context.
The Congress was dealing with the theme “‘The joy of love’: the way of the families of Rome in light of the Apostolic Exhortation Amoris laetitia of Pope Francis”.
After his opening address, the Pope answered three questions (only available in Italian) put to him by participants in the Congress. The third questioner began by saying that today we hear talk of the crisis of marriage and then asked how we can educate young people in love and in sacramental marriage, overcoming their resistance, their scepticism, disillusionment and fear of the definitive.
The Pope took up the last phrase and said that today we are living in a “culture of the provisional”.
As an example, he spoke of a bishop who had been approached by a university graduate who said he wanted to become a priest -- but only for ten years. This culture of the provisional is widespread even in priestly and religious life.
The Pope went on to say, according to the official Vatican version released later, that therefore some of our sacramental marriages are null, because the spouses say, “Yes, for the whole of our life”, but they do not know what they are saying, because they have a different culture. They say it, and they have good will, but they lack true understanding.
The Pope gave examples from Argentina when he was a bishop there.
He had forbidden people to marry in the Church when they were expecting a baby because they were not really free and several years later he had seen them come back for a sacramental marriage, truly understanding what they were doing.
He also mentioned that in pre-marriage courses the priest would ask the couples how many of them were living together and the majority would raise their hands. He said that instead of asking them immediately to get married in the Church the priests should accompany them, wait and allow them to mature in fidelity. For this we need a lot of patience.
In this broader context of the Pope’s remarks, we can see a true pastoral approach that recognises that many couples are not ready to enter into a definitive, indissoluble marriage when they first approach the Church, and that it is better to accompany them while they mature and come to a better understanding of what true sacramental marriage is. This is wise and the fruit of much pastoral experience.
Is it fair to say that because of this culture of the provisional and spouses’ lack of understanding of the definitive nature of marriage, some marriages are null?
Undoubtedly it is, although determining which marriages fall into this category is not easy. It was interesting to note that the leading Catholic academic in the US, Princeton University’s Professor Robert P. George, went to bat for Pope Francis on Twitter, saying “This is entirely possible. The erosion of the understanding of what marriage is has consequences for what people do.”
What aroused the criticism of the Pope in many media outlets was the fact that the video footage shows the Pope saying in reality that the “great majority” of marriages are null for this reason. That is obviously an exaggeration and so the official Vatican version has “some” marriages. The Holy Father would naturally have agreed to the change. Anyone can make loose comments in off-the-cuff remarks and afterwards they admit that what they said was not appropriate.
Even in a secular country like Australia, where three-quarters of couples live together before marriage and the same percentage marry before a civil celebrant, there are only 40 divorces granted for every 100 marriages celebrated each year, so most marriages stay together and are valid.
What we can learn from the Pope’s answer is the need to help couples prepare very well for marriage so that they are mature and well enough formed to understand the permanence of marriage and so enter into a valid marriage from the outset.
What we should not do is seize on an off-the-cuff comment and use it to criticise the Pope as if he does not know what he is talking about.
Father John Flader is a canon lawyer living in Sydney.

So the divorce has gone through. By a small majority Britons have repudiated their marriage (or was it only ever cohabitation?) with Europe. No-one really knows what this will mean in practice; we shall just have to see. But if Britain wants to be stronger and freer there is an urgent task awaiting it at home: many of her children are growing up in families either broken by divorce or never properly formed. The remedy for this has little to do with who Britain trades with or how strong the pound is; much could be achieved with a change of attitude in the political class. So Boris and Michael and Nigel and co -- what about it?