Dear "el dispreciau",
“The situation of migrant rights in Thailand continues to be deplorable... The case is unjust and unfair and I’m fighting it for myself and also for Thai campaigners who face the same sort of legal harassment.” (Andy Hall, following his court hearing)1
On Monday, despite an outpouring of support from activists around the world like you, Andy Hall was indicted for criminal defamation and computer crime by Thai courts after researching labour abuses at a factory owned by pineapple company Natural Fruit.
We’re horrified by this decision, which not only violates Andy’s right to freedom of expression but also undermines wider research into labour rights abuses in Thailand and the work of other activists.
With your help we’re doing everything in our power to try to help him. Last week, you were one of over 63,000 activists that sent messages to the Thai government, urging the authorities to do everything they can to get these charges dropped. We added to the pressure by delivering over 180,000 signatures calling for Andy’s release to Thai officials in Thailand and the UK (as Andy is a British citizen). 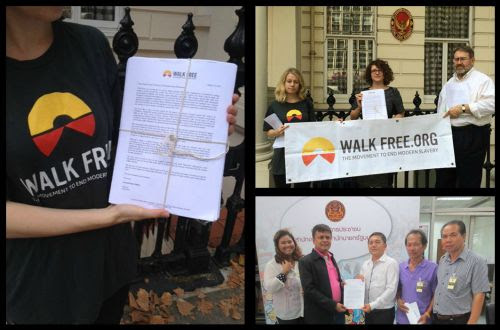 While the Thai authorities have acknowledged our efforts and recognised the huge level of international concern around the case, we know they have the power to do more. Sonja Vartiala, executive director of Finnwatch, has warned that, “At this point, the prospects for Andy Hall to receive a fair trial are looking grim.”2
In just a few weeks Andy will have to return to court where he will be charged and possibly detained pending bail. Can you help us keep up the pressure by spreading the word and showing Andy he still has our support?
Please join us once again in helping Andy by asking your friends and family to take action too. We’ve written an email you can forward below, or feel free to share one of our posts on your Facebook or Twitter pages.
In solidarity,
Zoe, Jamison, Jayde, Leena and the whole Walk Free team
1 http://www.telegraph.co.uk/news/worldnews/asia/thailand/11819811/British-campaigner-indicted-in-Thailand-over-report-which-alleged-abuses-at-fruit-juice-business.html
2 http://www.telegraph.co.uk/news/worldnews/asia/thailand/11819811/British-campaigner-indicted-in-Thailand-over-report-which-alleged-abuses-at-fruit-juice-business.html
Publicado por salud equitativa en 6:01