The Amazon Seeks Alternatives that Could Revolutionise Energy Production 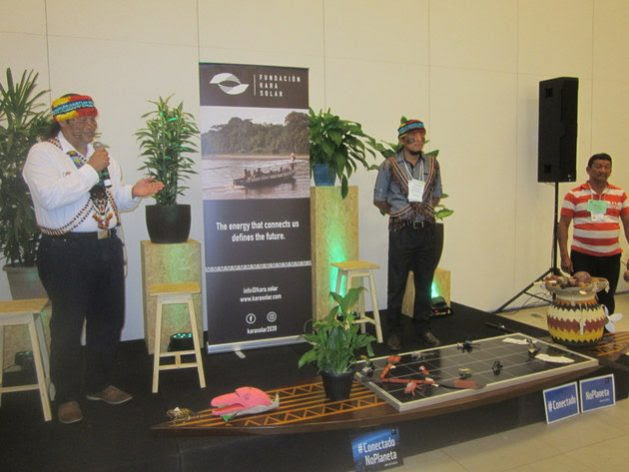 Milton Callera (holding the microphone) and Nantu Canelos, members of the indigenous Achuar community, explain how the two solar boats built to transport their people on the Amazon rivers of Ecuador work. The project is from the Kara Solar Foundation, which is promoting an alliance to "solarise" river transport in the Amazon rainforest. Credit: Mario Osava/IPS
MANAUS, Brazil, Apr 5 2019 (IPS) - A large steel wheel, 14 meters in diameter and 1.3 meters wide, could be the energy solution of the near future, generating 3.5 megawatts – enough to supply a city of 30,000 people, according to a company in the capital city of the state of Amazonas in northwest Brazil.
An internal fluid, which expands through a chemical reaction in contact with an ink, drives the rotation that produces electricity without interruption for at least five years, say executives at Eletro Roda, a company in the city of Manaus that is marketing the invention and is building its first demonstration unit.
“Installation of the unit costs less than half that of an equivalent solar power plant and occupies an area of just 200 square meters, compared to 50,000 square meters for solar and 5,000 square meters for wind power,” Fernando Lindoso, the director of the company in which he is a partner, told IPS.
In other words, in the space occupied by a wind power plant that generates 3.5 megawatts (MW), 25 electro-wheels could be installed, multiplying the generating capacity by a factor of 25.
In addition, it has the advantage of stable generation, “free of the intermittency of other sources,” said Lindoso, who estimated the cost of each 3.5 MW unit at around five million dollars, a price that is reduced for social projects.
There are interested parties in Japan, India and other countries in Asia, as well as in European and Middle Eastern countries, based on earlier prototypes that never made it to market, he said.
There will be a smaller version, generating one MW, “30 percent cheaper”, of identical dimensions, but with three tons of the fluid that is biodegradable, instead of the four used in the other model.
This was one of the alternatives presented at the Fair and Symposium on Energy Solutions for Communities in the Amazon, which brought together more than 500 participants and 39 companies and institutions in Manaus Mar. 25-28.
“My favorite is the solar boat, a good example of how to find solutions,” said Sam Passmore, director of the Environmental Programme at the U.S.-based Charles Stewart Mott Foundation, one of the meeting’s eight international sponsors. 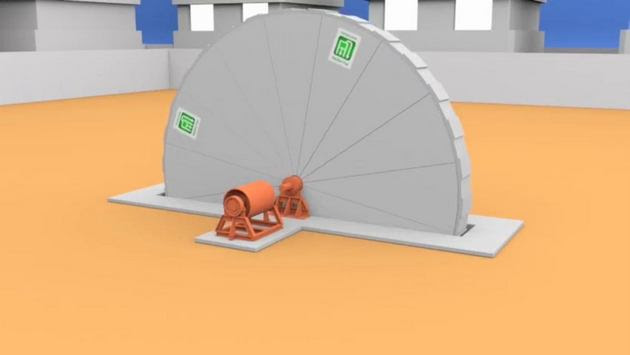 A large metal wheel that can be taken apart in order to facilitate transport produces electricity by rotating driven by an internal fluid, which is expanded by a chemical reaction. Producing 3.5 megawatts, the generator to be sold by Eletro Roda could produce a steady supply of electricity on just 200 square meters of space. Credit: Courtesy of Eletro Roda
An alliance for solar-powered transportation in the Amazon is propose by the Kara Solar Foundation, of the indigenous Achuar people of Ecuador, who since 2017 have built two 18-passenger boats powered by electricity from a rooftop made of photovoltaic panels.
Kara means dream in the Achuar language and it is about maintaining the sustainable culture of river transport, as opposed to “the roads that threaten our territory, presented as if they represented development,” project coordinator Nantu Canelos told IPS during the fair.
“We want to build 300, 400 solar boats,” said Milton Callera, technical director of the Coordinating Committee of Indigenous Organisations of the Amazon Basin (Coica).
Riverside dwellers and indigenous people in Brazil are also seeking to “solarise” their boats, especially the small ones, dedicated to fishing and the transportation of a few people. The problem is where to put the solar panels on the so-called “flying boats”, without slowing them down.
The discussions at the symposium, however, focused on the need to universalise energy. “There are still 500,000 people, or 100,000 families, without access to electricity in Brazil’s Amazon region,” according to Paulo Cerqueira, coordinator of Social Policies at the Ministry of Mines and Energy. 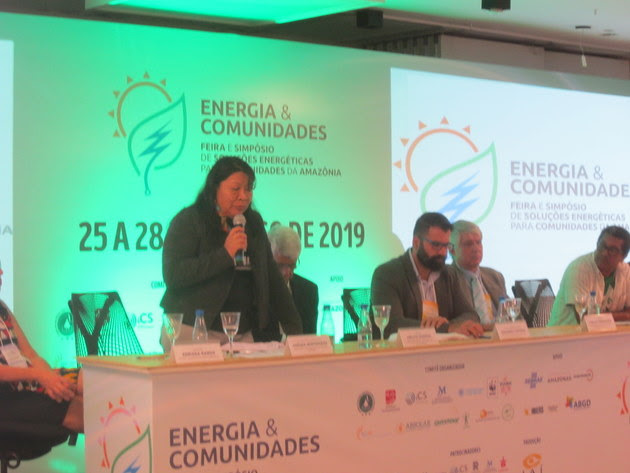 Attorney Joenia Wapichana, the first indigenous woman to hold a seat in Brazil’s Chamber of Deputies, speaks at the opening of the Symposium on Energy Solutions for Communities in the Amazon, in the city of Manaus. She is from Roraima, the state with a high indigenous population in northwest Brazil that is suffering a serious energy crisis due to the interruption of supplies from neighboring Venezuela. Credit: Mario Osava/IPS
The Light for All Programme, launched in 2003, benefited more than 16 million people, according to the ministry, in this country of 208 million people. But so far, isolated and remote communities, not reached by the power grid, have been excluded.
There are also millions of families who do have electricity, but are outside the National Integrated System, including the entire state of Roraima, in the northeast, with 580,000 inhabitants, on the border with Venezuela, from where it received most of its electricity until the supply crisis that erupted in March in the neighboring country.
Isolated communities in the state receive electricity mainly from diesel- or other petroleum-fueled generators.
The slogan for such cases is to replace costly, slow and unreliable transportation fueled by fossil fuels on the Amazon rainforest rivers, and to prioritise clean sources of energy. Solar power is presented as the most feasible solution, since the Amazon rainforest is not windy.
The exception is Roraima, where the state´s numerous indigenous people are studying the adoption of wind farms to help defend themselves from the impacts of the Venezuelan crisis.
Autonomous solar generation projects are mushrooming in the Amazon, in indigenous villages and riverbank settlements, sometimes funded by non-governmental institutions and international assistance, such as the German Agency for International Cooperation (GIZ) and the Rainforest Foundation of Norway. 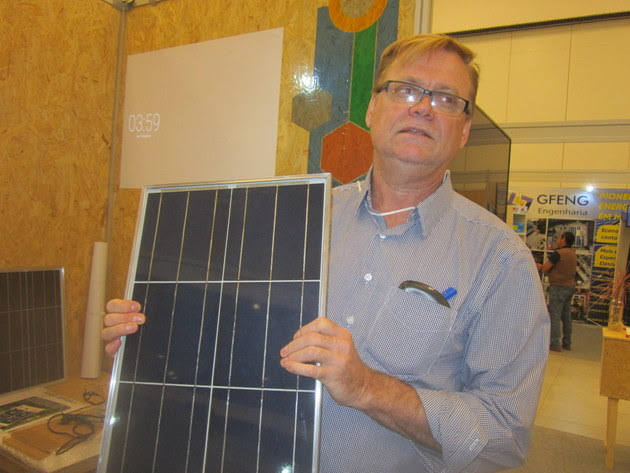 Willi Seilert, from the I9SOL Institute, explains how his solar panels are manufactured, during the Fair and Symposium on Energy Solutions for Amazonia, held in Manaus. He has a project to disseminate a thousand small solar panel factories in Brazil, in order to make photovoltaic generation cheaper in poor communities. Credit: Mario Osava/IPS
As a result, companies such as Fabortec Solar, which installs photovoltaic systems and sells equipment, focused on designing and offering off-grid projects, incorporating batteries and equipment that ensure operation and maintenance by the users themselves.
“The Amazon is a great market for those who don’t mind long trips and can work in places that are difficult to access,” a company technician told IPS.
The expansion of solar energy in many parts of Brazil, not only in the Amazon, prompted Willi Seilert to design a plan to promote 1,000 solar panel micro-factories throughout the country.
This could make the product cheaper and facilitate access by poor families and communities to solar energy, in addition to training, employing and generating income for nearly 20,000 people in the country, he estimated.

That’s why he founded the I9SOL Institute, where the “9” stands for innovation.
A 50-square-meter office, at least 10 people trained by two instructors, a glass-top table, an oven and a few tools are enough to produce small solar panels, he told IPS.
“The main obstacle is the import of photovoltaic cells, which Brazil does not produce and which has to pay too high a tariff, because of a strange legal measure adopted in 2012,” he lamented.
In addition to this, there are two industrial processes for processing silicon, and “the rest is packaging work that trained people can do without difficulty,” he said, before pointing out that this continues to be the case in China and India, which provides employment for millions of workers, especially women.
The project is to be launched in Teófilo Otoni, a city of 140,000 people in the southeastern state of Minas Gerais, whose mayor plans to employ prisoners nearing release in the solar industry, Seilert said.
There are more energy alternatives in the Amazonian region. Experiments with the use of oil from the babassu (Attalea speciosa) palm tree abundant in the Amazon and neighboring areas, and from andiroba (Carapa guianensis), a tree with oilseeds, for electricity generation were presented at the symposium.
Railton de Lima, the inventor of the Eletro Roda, which he called a “voluntary engine for mechanical energy generation,” also developed a system for converting urban waste into charcoal briquettes to generate electricity, making it easier to recycle metals.
This technology is already used in several Brazilian cities, including Manaus. Of Lima’s 28 inventions, more than half are already being used in the market, and others are being developed for energy purposes.
Creativity, which helps to seek more suitable alternatives, is also found in poor communities.
“The idea of the right to energy is powerful” and stimulates solutions, said Passmore of the Mott Foundation. In the same sense, the diversity of peoples and communities represented at the Manaus meeting was “a very positive factor,” he concluded.