Improving the Lives of Millions of Mothers and Children 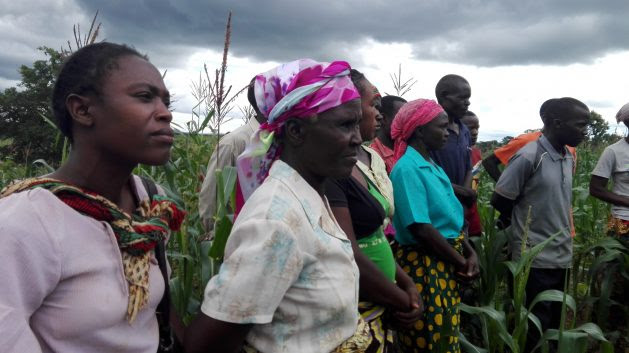 A group of farmers attend a field day on diversification for improved productivity and nutrition. Experts have recognised the agricultural sector’s special role in mitigating child and maternal under-nutrition in vulnerable groups through the increased availability of diversified diets. Credit: Friday Phiri/IPS
PEMBA, Zambia, Apr 26 2019 (IPS) - It is slightly after 3pm on a hot Wednesday afternoon in Chipata district, eastern Zambia, and a group of women are gathering for a meeting. It is Elizabeth Tembo’s turn to stand amongst the other mothers like herself and share key lessons on nutrition.
It is a subject she learnt about from a project implemented by the International Institute of Tropical Agriculture (IITA)and their partners.

“Through the project, I learnt a lot of improved farming practices for producing high-nutrient crops such as cowpeas and soya beans from which my family has greatly benefited,” Tembo says in an IITA report. “And I am now happy to help other women as well, so that together, we can reduce the high prevalence of malnutrition and stunting among our children in the community,” adds the lactating mother.
The Scaling Up Nutrition (SUN) project under ‘The Most 1,000 Critical Days Programme,’ was implemented from 2014-2017 by the IITA in collaboration with Development Aid from People to People (DAPP) and funded by Irish Aid, UK Aid Direct and the Swedish International Development Agency (SIDA). It targeted pregnant and lactating mothers with children up to 24 months of age.
“The project focused on promoting production, processing and utilisation of nutrient dense crops, vegetable and, fruit trees such as Soybeans, Cowpeas, Pigeon peas, Beans, Orange maize, Orange fleshed sweet potato and Papayas; and our role was to provide training to community-based trainers on production, processing and utilisation of these promoted crops and vegetables at community level,” Theresa Gondwe, Technology Dissemination Specialist at IITA Southern Africa Research and Administration Hub (SARAH), tells IPS.
In recent times, experts have recognised the agricultural sector’s special role in mitigating child and maternal under-nutrition in vulnerable groups through the increased availability of diversified diets.
“Now, around Africa, governments and communities are adopting innovations that are improving the lives of millions through diversified agricultural production as a pathway to improved diversity in household diets of poor small-scale farmers who produce for their own consumption,” Emmanuel Alamu Oladeji, from IITA SARAH, tells IPS.
The move comes as experts are more and more in agreement that food availability and access alone are not enough without the required nutrition levels.
For its part, IITA played a key role in the 2016 International Year of Pulses, to promote traditional high protein value crops such as cowpeas, common bean, lentils, chickpeas, faba and lima beans and other varieties.
According to a write-up by IITA, pulses may look small, but they are a big deal as nutritionists consistently find that their low glycemic profiles and hefty fibre content help prevent and manage the so-called diseases of affluence, such as obesity and diabetes.
It is also believed that because of the protein they hold they could assist the world in managing its livestock practices in a more sustainable way. This way more people can enjoy better and more varied middle-income diets without placing excess strains on natural resources.
And in the advent of climate change, which is already putting massive pressure on food systems, the need to more sustainable approaches in agriculture and integration of diversified diets for better nutrition has gained extra significance.
According to the United Nations, by 2050, population growth and dietary changes will drive food needs up by 60 percent. But as climate change is already putting pressure on food systems and rural livelihoods through drought, floods and hurricanes, ocean acidification and rising sea levels and temperatures, more climate-smart and environmentally friendly approaches are needed.
Adaptation is therefore an indispensable component in the ending hunger equation, especially for smallholder farmers, who are already grappling with climate change vagaries.
World Wide Fund for Nature (WWF) Zambia has a climate change adaptation project for smallholders in south-western Zambia.
“We are supporting smallholder farmers to build climate resilience,” Nachilala Nkombo, WWF Zambia Director, tells IPS. “We are providing direct training on climate-smart approaches to food production and working with government extension systems, as well as a peer network of farmers, to disseminate knowledge amongst farmers.”
Nkombo believes African agricultural policies have to mainstream climate change at all levels to cope with rising populations and the growing pressure on land and food production systems.
“We need a proper balance. We should not just open up new land because the population is growing, but also look for ways to play a role in large-scale reforestation,” observes Nkombo.
Back to the SUN project, Gondwe is convinced of the positive impact of the intervention.
“The project emphasised on diversifying crop production for improved nutrition and there are successful examples in Luapula, Eastern, and Northern Provinces where the project was implemented. And most of the involved farmers in the project areas have seen positive changes in their livelihood,” she says.
Lyness Zimba from Lundazi district in eastern Zambia provides further testimony about what she has learnt.
“I took seriously the weekly lessons given to us by agricultural and health specialists,” says Zimba in an IITA report.
“We were taught a variety of topics such as the importance of feeding our children with nutritious foods, how to cultivate and make use of a variety of high-nutrient crops to get maximum nutritional benefits. The recipes have made it easy for us to prepare nutritious meals for our children; we are no longer the same.”