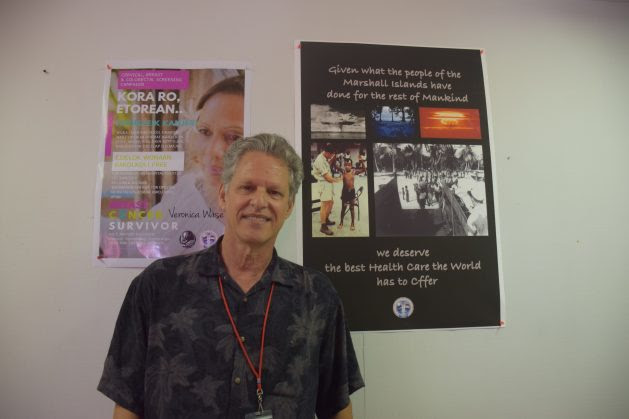 Jack Niedenthal, the secretary of Health and Human Development in the Republic of Marshall Islands stands in front of the poster that records the dark past of the Pacific island nation and the need for good healthcare. Credit: Stella Paul/IPS
MAJURO, Apr 5 2019 (IPS) - In Jack Niedenthal’s office in Majuro, there is an ominous reminder of the dark history of the Marshall Islands—once the site for dozens of nuclear tests conducted by the United States between 1946 and 1962. But it also provides a strong message about the future of island nation.
“Given what the Marshall Islands has done for humankind, we deserve the best healthcare in the world,” reads a poster on his wall.

“What you see here is what I strongly believe,” says Niedenthal, the secretary of Health and Human Development here.
In fact, today the Pacific island nation’s main national income, aside from the sale of fishing rights to foreign firms, is the money the U.S. pays as compensation for conducting the nuclear tests through the Compact Trust Fund.
Many of those who live on the islands where the nuclear tests where conducted suffer from cancer. These cases are in addition to the high occurrences of tuberculosis (TB), diabetes and leprosy that the health authorities here have to address.
Niedenthal tells IPS that although the latter three diseases are not directly connected to the nuclear tests or radiation, the nation’s citizens, some 53,000, must be able to realise their right to good health and have the opportunity to live long lives. However, the resources to ensure that good healthcare is available to all remains limited.
So, Niedenthal is adopting practical measures by integrating services to provide care for people suffering from two of the country’s most endemic diseases, TB and leprosy. From the screening of citizens for potential new cases, to consultations with doctors and nurses, the integration is supposed to mean better and more accessible services. “It’s a small place. If tomorrow there is an epidemic, it will affect everyone. So, [an integrated] programme will help us be better prepared,” Niedenthal says.
The integration is a natural step in strengthening the healthcare sector here, but it should also include the sustained availability of services, say health experts. Without ensuring the latter, integration will neither result in significant improvement nor will it help eliminate the diseases, especially leprosy, says Dr. Arturo Cunanan, the head of the Culion Sanitarium and General Hospital in the Philippines and a world leprosy expert.
“Ideally, this is how it should be. Care for leprosy should be integrated with the general healthcare services. It is the only way to ensure the care is available at every level of the healthcare sector—right from the village to the city.
“If this can be done, a person who is affected, doesn’t have to travel far and wide to a specialised clinic or be dependent on a niche expert because every healthcare centre will have a person with some level of leprosy expertise. However, the two much go hand in hand because without sustained services and availability of that expertise, the integration cannot achieve anything,” Cunanan tells IPS. 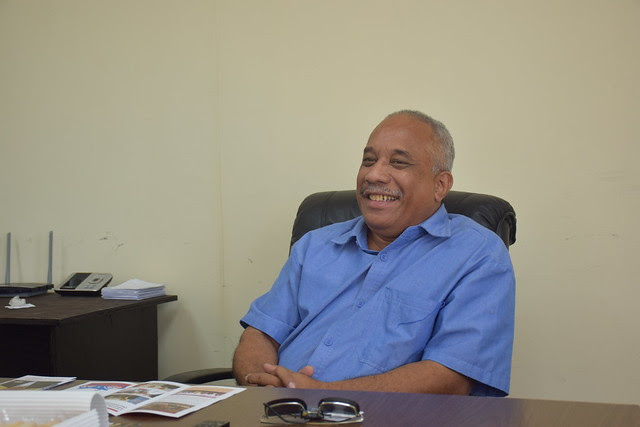 Jefferson Barton, the Deputy Secretary of the Republic of Marshall Islands, says that the government considers leprosy elimination a high priority. Credit: Stella Paul/IPS
According to Cunanan, leprosy, is a “victim of its own success” meaning that due to the decreased number of cases, it is not a high priority with the governments anymore, even in countries were it is not yet eliminated.
The low priority is reflected in the low resource allocation, inefficiency in the management of the programme besides lack of facilities and skilled staff.
But while supplying integrated healthcare services promises to ease the management of the leprosy programme at an administrative level, it also can create scarcity of staff with specialised skills to treat leprosy. Sustainability, therefore, must be the key, Cunanan explains.
But Jefferson Barton, Deputy Chief Secretary of Republic of Marshall Islands (RMI), says that the government considers leprosy elimination a high priority.
“Health and education are our top priorities and even in health, we are focusing on educating the Marshallese people, especially the children, about the biggest health issues,” Barton tells IPS.
He, however, also assures that the country is willing to collaborate more with international experts, and donors such as the Sasakawa Health Foundation and its parent body the Nippon Foundation, to ensure better healthcare in RMI.
Globally, the treatment of leprosy is free. Manufactured and donated by Novartis, multidrug therapy or MDT, is distributed through the World Health Organisation.
But access to other services such as information about the disease, and credible, accurate and cleaned data on leprosy and TB is less than adequate—a fact that Niedenthal admits. He, however, believes that with support from the international community the country can overcome these challenges and ensure sustained healthcare for all.
“A lot of Marshallese travel and work abroad. If they carry a disease, it will affect people there. So, when you give us money to control the disease here, you are investing in your own well-being,” Niedenthal says.