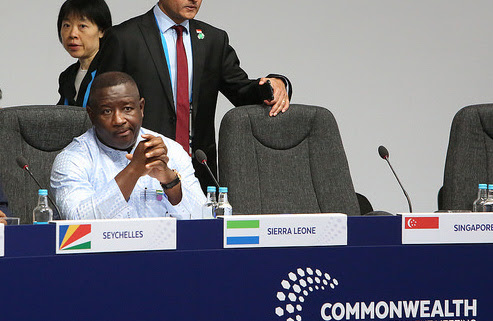 Sierra Leone’s President Julius Maada Bio. Courtesy: The Commonwealth
LONDON, Apr 1 2019 (IPS) - If the government of Sierra Leone’s President Julius Maada Bio were to be graded on their first year’s performance in office, it is likely that their report card would read, “promising start, which they must surpass in the years ahead”.
Since taking office after his successful election last year, this retired brigadier general has made a promising start, beginning with a massive investigation into corruption and mismanagement under the All Peoples Congress (the APC) government of ex-President Ernest Bai Koroma.
On the recommendations of that investigation, a judge-led public inquiry is now examining corruption allegations against former officials. Early scalps in this veritable war on graft include those of ex-Vice President Victor Bockarie Foh and former minister Minkailu Mansaray; they have both offered to return money they stole.
The issue of corruption hits a raw nerve here, a country that is desperately poor despite its wealth of natural resources and fertile lands, which in a parallel universe would guarantee a decent standard of life for every one of its 7.5 million citizens. Former government officials are also widely believed to have stolen resources meant for the victims of the Ebola and mudslide disasters which laid waste to thousands a few years back.
Freetown resident Levi Fofana captures the public mood when he says Bio came at the “right time”. “The people of Sierra Leone were lied to by the roguish APC, which created a bankrupt state in which swindlers dressed in suits and African robes abused power with impunity,” he said.
Although ex-President Koroma has called the anti-corruption drive a “witch-hunt”, ordinary people are enthused, urging the government on. They hope Koroma will find himself in the dock one day soon; they want to know how the former president and his close family and associates became “overnight millionaires”.
Bio was the leader of the former military junta who handed power to a democratically-elected government after organising elections in 1996. He has brought renewed hope to this coastal West African nation which suffered a devastating civil war in the 1990s that killed tens of thousands and devastated the economy – and which had to endure a decade-long APC hegemony characterised by corruption, economic decline, and drift.
He inherited state liabilities of 3.7 billion dollars. Simultaneously as he drove forward his anti-corruption campaign, the new President upon taking office established a consolidated account for all government revenues. The goal was to plug any potential “leakages” in his own administration.
According to T J Lamina, Sierra Leone’s High Commissioner to London, the policy has been a success, and is still in place. Revenues collected have gone towards servicing the domestic debt and paying civil servants, who are now getting paid on time and without the government having to borrow.
Ambassador Lamina told IPS: “It’s not like Sierra Leone is not generating revenue; the revenue is there but it was going into private pockets.”
Bio’s stewardship of the economy has won plaudits from the IMF, who have approved a new two-year support programme worth 172 million dollars. The World Bank has chimed in with support to the tune of 325 million dollars. Both Bretton Woods institutions’ relationship with the previous administration had been “increasingly difficult”, which saw the IMF suspending their programme in 2017. President Bio has said both institutions were “necessary evils”.
His ambitious, five-year National Development Plan, costed at 8 billion dollars, was unveiled in February and has been endorsed by the Bretton Woods double act. Its key pillars include the development of human capital and infrastructure, and increasing agricultural production, especially of the staple food, rice – which the country used to export up till the 1970s, but which now sucks up valuable foreign exchange to import.
Inevitably with report cards, you eventually get to the bits that cause embarrassment or feelings of regret in the subject. In this case one of these has to be the alarming rates of gender-based violence against women and young girls. The available figures paint the story in vivid technicolour.
According to police statistics, there were 632 cases of rapes or sexual assaults in 2012. That figure rose to an astronomical 8,505 for last year alone. Over 70 percent of victims were girls under 15 years old. Although the government declared the crisis a state of emergency and speedily passed legislation making the “sexual penetration of minors” punishable with an automatic life sentence, it remains to be seen how effective this will be.
“Our commitment [to solving this problem] is beyond mere words and beyond mere acknowledgement of an obligation,” President Bio has said. “The protection and empowerment of our women and girls is critical to our existence and progress as a nation.”
While it is true that they inherited the problem, it would be a harsh indictment of President Bio’s “new direction” if, by this time next year, the incidence of egregious sexual violence remains at unacceptably-high levels.
Observers also expressed concern over last year’s arrest by police of a man who led a demonstration against the removal of subsidies from petrol and kerosene. He was later released without charge. Rights groups subsequently called on the government to respect the right of peaceful protest.
“The price of our fuel was hiked because the IMF told government to do it,” said protester Fatmata Bangura, adding that the move would put “more strain on a budget already under a lot of pressure”.
From an appraisal of the first year of President Bio’s government, two things are clear. The first is that he has entered into a marriage of convenience with the IMF and the World Bank; the second is that, if his government’s promising start is to be surpassed, or even sustained, he will need the skills of a master magician to keep his people, as well as his “marriage partners”, happy.