Print | Send by email
Joseph Chamie is former Director of the United Nations Population Division.
NEW YORK, Apr 1 2019 (IPS) - Two, four and eight billion people is the extraordinary doubling and redoubling of the world’s population that occurred in slightly less than a century. World population, which had grown to 2 billion by 1927, doubled to 4 billion by 1974 and will reach 8 billion by around 2023. 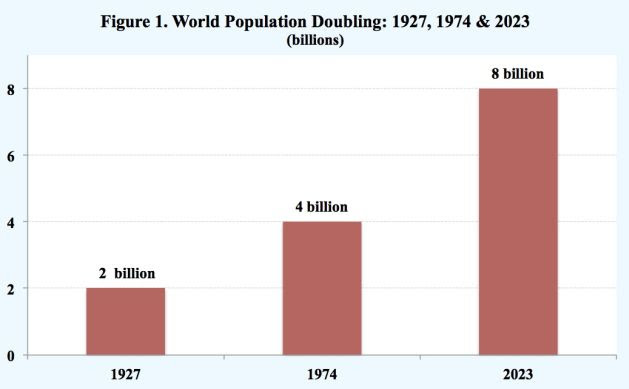 Source: United Nations Population Division.
Is that record-breaking demographic growth of world population likely to be repeated in the 21st century? The short answer is:  while a doubling of world population over the course of the 21st century is possible, its quadrupling is not in the cards.
In the late 1960s the growth rate of the world’s population peaked at 2.1 percent and has since declined to approximately half that level, or 1.1 percent. The annual addition to the world’s population also peaked in the late 1980s at nearly 93 million and is now about 82 million per year. The primary reason for lower levels of world population growth is the decline in fertility rates or the average number of births per woman.
At the beginning of the 20th century average global fertility was still about six births per woman. By 1950 world fertilityhad declined only slightly to five births per woman, with less than a handful of countries having rates below the replacement level. During the second half of the 20th century, however, birth rates dropped relatively rapidly across most countries, resulting in today’s world fertility level of about 2.5 births per woman (Figure 2). 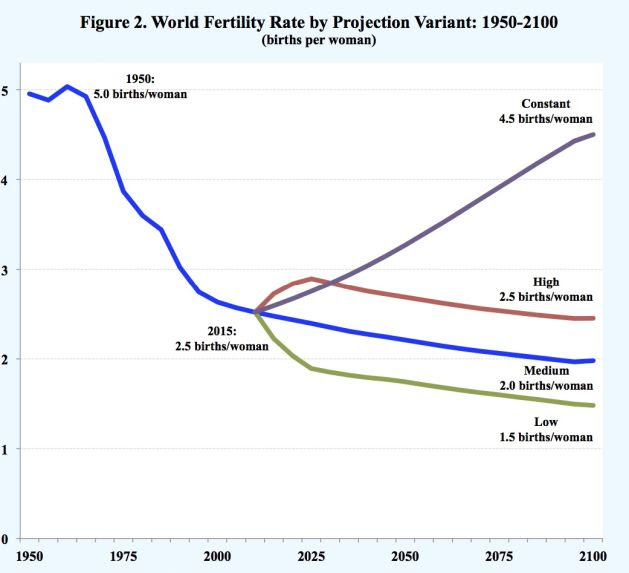 Source: United Nations Population Division.
Powerful forces, which continue to operate today, brought about the declines in fertility primarily during the second half of the 20th century. Particularly noteworthy among those forces were lower mortality, increased urbanization, widespread education, improvements in the status of women and modern contraceptives.  Survival of the young, migration from rural areas to urban centers, education and employment of women contributed greatly to the desire of couples, especially women, to delay, space and limit childbearing.
Not so long ago, the attempts of women and men to time and limit their number of children were resisted, with some countries having laws preventing the distribution of contraceptive materials and information. Throughout the 20thcentury especially following the Second World War, public attitudes, government policies and personal behavior changed markedly regarding birth control and contraception.
In the early 1960s modern contraceptives, notably the oral contraceptive pill, became available to married women and subsequently to unmarried women. Today nearly two-thirds of women aged 15 to 49 years who are married or in a union are using contraceptives, with close to 60 percent of them using a modern family planning method. However, one in ten married or in-union women aged 15 to 49 years, or approximately 142 million women, want to stop or delay childbearing but are not using any contraceptive method to prevent pregnancy.
The availability of the oral pill and other modern contraceptive methods permitted couples to gain control over the number and timing of their births. The ability for both women and men to determine the timing and number of births is certainly a major achievement having enormous demographic, social, economic and political consequences.
Although mortality levels continue to play an important role in the growth of world population as it has throughout human history, fertility rates constitute the critical determinant of the future size of world population. If birth rates remain unchanged at current levels, a highly unlikely scenario given recent trends, the world’s population would reach 26.3 billion by the end of the century (Figure 3). 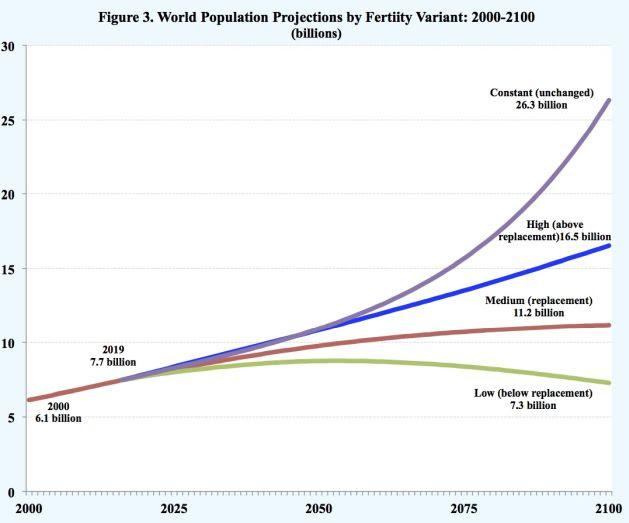 The country with the most rapid rate of projected population growth is Niger. Its population is expected to increase seventeen-fold over the 21st century, from 11 million to 192 million, again according to the medium variant. If fertility were to decline more rapidly, the low variant, from its current 7 births per woman to 4 births per woman by mid-century and to the replacement level of 2 births per woman by the century’s close, Niger’s population would increase nearly thirteen-fold to 144 million during the century. Moreover, even if its fertility rate were to fall immediately to the replacement level, the instant replacement variant, Niger’s population is projected to triple to 37 million over the 21stcentury. 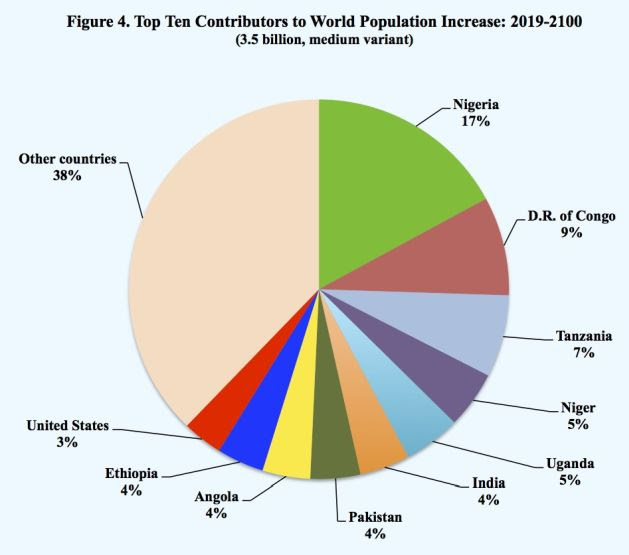 Source: United Nations Population Division.
World demographics of the recent past are explicit, detailed and straightforward. The 20th century was the most rapid world population growth in human history. Although dramatic declines in mortality and fertility levels have taken place, the growth of world population continues but at a slower pace than the recent past.
It is evident that world population will soon reach 8 billion and will continue to increase well after that demographic milestone. As described above, the future growth of world population will largely be a function of the path of future fertility, especially across the high fertility countries of Africa.
Of course, the future of world population remains uncertain and current demographic conditions, particularly mortality and morbidity levels, could change markedly for the worse as has occurred at various times in the past.
Nevertheless, population projections for the 21st should not be dismissed as merely demographic soothsaying. Demographic projections provide valuable insight into the most likely future course of population growth and what policies and programs may be needed to address changing demographic conditions and their consequences.
A world population of 8 billion people and possibly double that number by the century’s close poses a plethora of critical challenges for humanity as well as the planet’s flora and fauna. Prominent among those challenges, especially relevant for rapidly growing developing countries, are concerns about food, water, housing, education, employment, health, peace and security, governance, migration, human rights, energy, natural resources and the environment.
Unfortunately, in too many instances political leaders have chosen to address those critical challenges with the three D’s: Denial, Delay and Do nothing. In order to deal effectively with the many population related challenges of the 21stcentury, government policies and programs as well as the efforts of international and national organizations should be guided by the three A’s:  Acknowledge accurately, Analyze thoroughly and Act prudently.