Safeguarding The Health of People and Planet Through Food 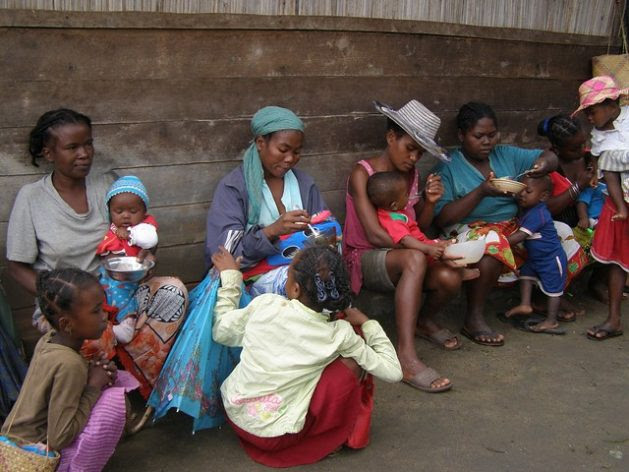 Mothers and their children gather at a community nutrition centre in the little village of Rantolava, Madagascar, to learn more about a healthy diet. Credit: Alain Rakotondravony/IPS
UNITED NATIONS, Apr 6 2019 (IPS) - Food sustainability, both in production and consumption, is at the heart of a healthy public and planet.
On World Health Day, it is increasingly clear that a radical transformation of the global food system is sorely needed.
“In recent years we have witnessed a gradual departure from sustainable food models, such as the Mediterranean Diet, in favor of models rich in animal-based proteins, processed foods with high percentages of sugar, salt, fat or low in fiber,” said Barilla Foundation’s nutritionist and researcher Katarzyna Dembska.
“These food solutions can expose us, in the long run, to very expensive diseases or health problems. Choosing sustainable diets, in addition to reducing the impact on the environment, can positively affect longevity,” she added.
The EAT-Lancet Commission echoed similar sentiments in a report, stating: “Food is the single strongest lever to optimize human health and environmental sustainability on Earth. However, food is currently threatening both people and planet.”
According to the Barilla Foundation, more than 650 million people over the age of 18, equal to 13 percent of the world’s population, are obese.
Obesity, caused by unhealthy diets, is among the risk factors for non-communicable diseases such as cardiovascular diseases, respiratory problems and diabetes. 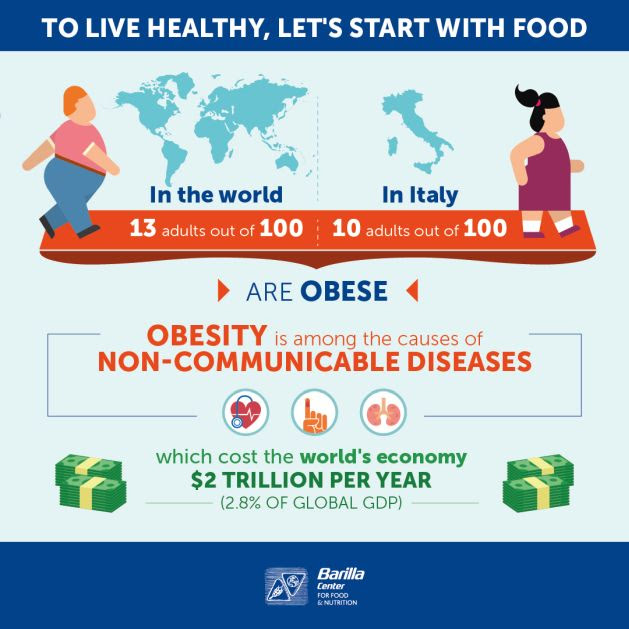 New research by the Institute of Health Metrics and Evaluation (IHME) found that unhealthy diets are responsible for 11 million deaths worldwide per year, even more than smoking tobacco.
The assessment shows that diets high in sodium and low in whole grains, fruit, vegetables, and nuts all contribute to diet-related deaths. Heart attacks and strokes are the main diet-related causes of death.
The study also found that an improvement of diet could prevent one in five deaths worldwide.
“This finding suggests that dietary policies focusing on promoting the intake of components of diet for which current intake is less than the optimal level might have a greater effect than policies only targeting sugar and fat, highlighting the need for a comprehensive food system interventions to promote the production, distribution, and consumption of these foods across nations,” researchers said.
Obesity and diet-related diseases additionally incur high long-term expenses, which “weigh on the entire global economic and health system,” Barilla Foundation said.
Obesity costs the global economy an estimated $2 trillion, representing almost 3 percent of the world’s gross domestic product (GDP).
In Italy alone, costs associated to cardiovascular diseases amount to almost $17 billion while the treatment of cancer costs approximately $7 billion.
But it is not just the way we consume food that threatens our health, but also its production.
Food production is one of the largest contributors to climate change, accounting for a third of greenhouse gas emissions.
According to U.N. University, emissions from livestock account for almost 15 percent of global greenhouse gas emissions. Beef and dairy alone make up 65 percent of all livestock emissions.
In fact, meat and dairy companies are on track to become the world’s biggest contributors to climate change, surpassing the fossil fuel industry.
Already, climate change has taken a toll on health including in 2003 when temperatures rose 20-30 percent above average in Europe, resulting in over 30,000 deaths.
The World Health Organization (WHO) predicts that climate change will cause 250,000 additional deaths per year from malnutrition and heat stress between 2030 and 2050.
But this can be prevented with a shift in how we eat and produce food.
“The care of our health really starts from our plate,” Dembska said.
For instance, the Double Environmental Food Pyramid combines the classic food pyramid alongside a new environmental pyramid where foods are categorized according to their ecological footprint. Namely, red meat is at the bottom of the environmental pyramid with high environmental impact while being at top of the classic pyramid with low nutrition.
A shift to a Mediterranean diet, similar to the classic food pyramid which emphasizes plant-based foods such as fruits, vegetables, legumes, and whole grains, is estimated to add 4.5 years of life expectancy.
The EAT-Lancet Commission’s proposed planetary health diet is similar, requiring the consumption of red meat to be cut by half while vegetables, fruit, and nuts must double.
“The global adoption of healthy diets from sustainable food systems would safeguard our planet and improve the health of billions,” they said.