Global Energy Consumption is Up -- So Are Emissions | Inter Press Service

Global Energy Consumption is Up -- So Are Emissions | Inter Press Service

Global Energy Consumption is Up — So Are Emissions

Print | Send by email
Sunita Narain is Editor, Down To Earth based in New Delhi

Illustration: Tarique Aziz
NEW DELHI, Apr 22 2019 (IPS) - Our acceptance of climate change doesn’t keep pace with our energy consumption reduction. However, the latest International Energy Agency’s (IEA’S) Global Energy and CO2 Status Report for 2018has some good news.
It offers where possible answers lie in our quest to mitigate climate change. This is what we should discuss. But transitions in energy use will be contested and even be more difficult, if we don’t factor in climate justice.
IEA’s report finds that global energy consumption is up — twice the average rate of growth since 2010. This is because of robust economic growth in the world and weird weather, ironically because of climate change.
As a result, energy-related carbon dioxide (CO2) emissions are up, with the power sector accounting for two-thirds of the growth in emissions. Oil demand increased by 1.3 per cent in 2018 and so has the demand for coal. 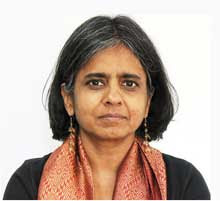 Sunita Narain
But the latter is slower and more sluggish than the period before. Still, coal-based power plants were the single largest contributor to the growth in emissions in 2018.


IEA estimates that CO2 emitted from coal combustion was responsible for over 0.3°C of the 1°C increase in global temperature over the pre-industrial levels.
But here is the good news that has the potential to turn around the energy trajectory that jeopardises our future. First, natural gas is replacing coal for generation of power — roughly 24 per cent of the growth in natural gas use in the world was because it was being substituted for coal in power plants.
This happened mostly in the US and also in China — where its domestic policy to clean air pollution (called the Blue Skies initiative) pushed for curtailment of coal use in industrial boilers and power plants.
Without this shift, CO2 emissions would have been 15 per cent higher, estimates IEA. However, we need to note that gas does have higher methane emissions — a potent greenhouse gas (GHG) — and this is not accounted for by the IEA assessment in its CO2 balance sheet.
Secondly, renewable energy — solar, wind, hydel and bioenergy — is now a big part of the power balance sheet of the world. Renewable-based electricity generation increased by 7 per cent.
This, as IEA puts in perspective, is Brazil’s total energy electricity demand and one-point higher than the annual growth rate since 2010. China accounted for 40 per cent of the increase in renewables; Europe some 25 per cent and interestingly, both the US and India witnessed 13 per cent increase in renewable energy growth.
Renewable energy accounted for a quarter of the global power output in 2018, second after coal. In Germany and also in the UK, renewable energy provided over 35 per cent of the electricity.
Without the switch to gas and increased use of nuclear and renewables, CO2 emissions would have been 50 per cent higher, for the same economic growth that the world saw in 2018, says IEA. This is not small. This is not to be scoffed at. But this is not enough.
The problem is the unequal nature of wealth in the world and the fact that this energy transition has to be made even as significant parts of the world need more energy — to light up homes, to cook food and to run their industries. This is the challenge and this is where we totally fall short.
The US, for instance, desperately needs to reduce its total GHG emissions — its contribution to the stock of gases already in the atmosphere is massive (almost a quarter). It has to reduce.
But in 2018, its CO2 emissions actually increased by 3.7 per cent. This is despite the fact that it substituted coal for gas and so, brought down its emission intensity. In other words, it has increased its emissions to such an extent that it has negated any gains it could have made because of this shift.
This is also when methane is not being added to its emission balance sheet. This is not good; not good at all.
Similarly, the use of oil — primarily used for road transportation — increased at higher rate in the US, even when compared to China and India. This is when ownership and use of personal vehicles is already gargantuan and gross in the country.
So, how will the world contract its emissions? How will it still provide the right to development of the poor and the now emerging countries? Will it and can it? This is what needs to be discussed. This is the inconvenient truth of climate change action.