Print | Send by email
Arul Louis, a New York-based journalist who covers the United Nations, is a non-resident senior fellow of the Society for Policy Studies.
UNITED NATIONS, Mar 6 2019 (IPS) - A reexamination of the role of the United Nations and a tallying of its successes and failure get underway as it prepares for the 75th anniversary next year in the world of the 21st century while its core entity, the Security Council, is trapped in the time warp of 1945, its founding year. 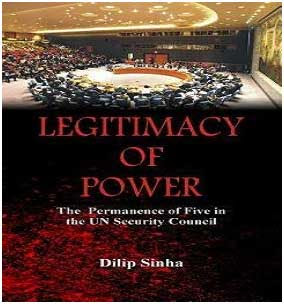 Being both a critique and analysis of the Council’s role as well as a work of encyclopedic proportions about its history, the political philosophies girding it and its evolution, former Indian diplomat Dilip Sinha’s book is a valuable resource for these debates that are gaining urgency from the milestone anniversary.
The title may give the impression that it is about the legitimacy of the Council’s power, but it actually questions the Council’s legitimacy in the exercise of power as seen from the perspective of a diplomat with an insider’s view of its working, both when its members gather in its chamber around the circular desk under the painting of Phoenix rising, and when the real business takes place in negotiations far from public view.
Sinha handled United Nations affairs for India from New Delhi as a special secretary during its 2011-12 tenure on the Council and he has also served as New Delhi’s Permanent Representative to the UN in Geneva.
The main mission of the UN is maintaining international peace and security and UN Charter assigns that role to the Council, but in public perceptions its failures reflect on the entire UN.
While most of the other parts of the UN and other international organisations have been “developing processes of inclusive decision-making and modified their mandates,” he writes, “the Security Council remains mired in its archaic politics of power.”
When the UN Charter was adopted with 51 members in a world emerging from the trauma of World War II, its victors assumed the veto-wielding permanent seats on the Council as spoils of war and the veto powers of the five permanent members – the P-5 made up of Britain, China, France, Russia and the United States – is at the core of the Council’s functioning — and its consequent dysfunction.
In his critique of the veto powers, Sinha says that it either reduces the Council to “a dictatorship of the hegemons” or it functions as a “safety valve,” but concedes that “it is at best an unpleasant necessity.”
While the veto powers have made it impossible to take decisive action to end the multi-dimensional civil war in Syria or Yemen – as it has failed numerous times in its history – where vital interests of the P-5 clash, the Council is expanding its reach beyond the Charter-mandated primary role of maintaining international peace and security in a mission creep that now includes, among other things, human rights, women’s empowerment, climate change and terrorism, Sinha points out.
But beyond the dysfunction, “the permanent membership of the five violates a basic principle of democracy,” he says.
The non-representation of the developing counties, which make up more that two-thirds of the UN membership (unless one adds the economic superpower China to their number) in the ranks of the permanent members is at the heart of the imbalance in the power equations.
Meanwhile, the 28-member Group of Western European and Other States has two permanent members, Britain and France, (or three, if the group’s observer, the United States, is included). But Latin American, African and the Middle Eastern nations have none.
While there is near consensus that African countries – the largest group in the UN with 54 members or 28% of the 193 membership, and from the continent home to most peace operations mandated by the Security Council – deserve representation, the demands of other countries – notably Brazil, Germany, India and Japan that make up the Group of 4 or G-4 – are more controversial.
While these glaring inequalities may cry out for reform that changes the composition of the permanent membership, Sinha is not optimistic it can happen.
For the US and the European Union, “UN reform means giving more powers to the organisation to regulate the internal affairs of member states” on issues like human rights and good governance, he writes.
And on the other side, among the developing countries and others, there are differing interests and clashing opinions, as he points out.
As an illustration of the difficulties before G-4 and others in finding their way to a permanent membership, Sinha writes, “The permanent seat aspirants face the impossible challenge of satisfying the larger membership of the General Assembly without displeasing the permanent five.”
Sinha instead introduces the idea of weighted voting as a starting point for the reforms. The concepts of the equality of member states in the General Assembly and their inequality in the Council “are outdated,” he points out because “all countries are not equal” given the disparities in population and economic and military powers, among other things.
The P-5’s permanent veto power, moreover, “violates the principles of constitutionalism” and “has crippled it.”
As a remedy, he suggests, “Weighted voting can partially address the concerns of the permanent five and introducing the requirement of a super-majority for resolutions under Chapter VII (for taking military action) will allay the concerns of others.”
“A moderate increase in the size of the Council will improve regional representation,” he adds.
(Arul Louis can be contacted at arullouis@spsindia.in and followed on Twitter at @arulouis)
*Legitimacy of Power: The Permanence of Five in the Security Council;
Author: Dilip Sinha; Publishers: Vij Books India Pvt Ltd, New Delhi, and Indian Council of World Affairs, New Delhi; Price: On Amazon: Hardcover $65; Paperback $39.95; Rs.940