South-South cooperation – collaboration between developing countries - is a growing and dynamic phenomenon, an important process that is vital in confronting shared challenges. Led by emerging giants India, Brazil and South Africa (IBSA) the South is a tremendous source of tested solutions to development challenges including the Millennium Development Goals (MDGs). The Nairobi Outcome of the 2009 High Level United Nations Conference on South-South Cooperation in Nairobi, Kenya highlights growing political and economic ties within the developing world, as countries from the South assume leading roles in decision-making on hot global issues ranging from economic recovery to food security and climate change. 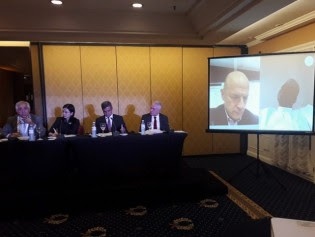 By Daniel Gutman
Communication can be a key tool for the development of cooperation among the countries of the global South, but the ever closer relations between them do not receive the attention they deserve from the media.

By Roberto Savio
I have been a member of the first international party: the Transnational Radical Party, founded in 1956 by Marco Pannella and Emma Bonino. Then in 1988, I was a witness of the large protest, in Berlin West, against the meeting of the International Monetary Fund and the World Bank, a precursor of the “Battle of Seattle” in 1988, where 40.000 protesters disrupted the annual meeting of the two world’s financial institutions. I was even detained for a day by the police, even if was just a witness: my condition of foreigner made me automatically suspect.

Youth in Latin America Learn About Paths to Clean Energy

By Mariela Jara
Young Peruvians plan to take advantage of the knowledge acquired in Brazil's semi-arid Northeast to bring water to segments of the population who suffer from shortages, after sharing experiences in that ecoregion on the multiple uses of renewable energies in communities affected by climatic phenomena.

Is There a Remittance Trap?

By Ralph Chami, Ekkehard Ernst, Connel Fullenkamp, and Anne Oeking
Workers’ remittances—the money migrants send home to their families—command the attention of economists and policymakers because of their potential to improve the lives of millions of people.

UN Vote on Palestine a Humiliating Defeat for US & its Envoy

By Thalif Deen
Nikky Haley, the vociferously anti-Palestine US Ambassador to the United Nations, warned member states last year she will “take down names” of those who vote against American interests in the world body—perhaps with the implicit threat of cutting US aid to countries that refuse to play ball with the diplomatically-reckless Trump administration.

By SWAN
When Jean-Michel Basquiat’s paintings were shown in France a few years ago, a visitor overheard a teenager remarking that the artwork seemed to have come from “a very angry little boy”.

By Humberto Márquez
They sell their houses, cars, motorcycles, household goods, clothes and ornaments - if they have any - even at derisory prices, save up a few dollars, take a bus and, in many cases, for the first time ever travel outside their country: they are the migrants who are fleeing Venezuela by the hundreds of thousands.

By Thalif Deen
The Group of 77 (G77) -- the largest single coalition of developing countries at the United Nations-- is to be chaired by Palestine, come January.

By Mario Osava
"Now we live well," say both Givaldo and Nina dos Santos, after showing visiting farmers their 1.25-hectare farm in Brazil’s semi-arid Northeast, which is small but has a great variety of fruit trees, thanks to innovative water and production techniques.

By Daniel Gutman
Senegalese immigrants began to arrive in Argentina in the 1990s and most of them joined the group of street vendors in Buenos Aires and other cities. But in recent months, they have suffered police brutality, denounced as a campaign of racial persecution.

By Edgardo Ayala
Having a seven-litre container with a filter on the dining room table that purifies the collected rainwater, and opening a small valve to fill a cup and quench thirst, is almost revolutionry for Salvadoran peasant farmer Víctor de León.

By Daniel Gutman
As in other Latin American countries, in recent years China has been a strong investor in Argentina. The environmental impact and economic benefits of this phenomenon, however, are a subject of discussion among local stakeholders.

Chile, an Oasis for Haitians that Has Begun to Run Dry

By Orlando Milesi
A wave of Haitian migrants has arrived in Chile in recent years, changing the face of low-income neighbourhoods. But this oasis has begun to dry up, thanks to measures adopted by decree by the new government against the first massive immigration of people of African descent in this South American country.

By Diana G Mendoza
"My son in primary school did not attend a birthday celebration because it was cancelled due to bad air -- and we live in Seoul, a great place to live," said Dr. Frank Rijsberman, director-general of the Global Green Growth Institute (GGGI).

By Daniel Gutman
Fares al Badwan moved to Buenos Aires alone, from Syria, in 2011. He was 17 years old then and the armed conflict in his country had just broken out. Since then he has managed to bring over his whole family and today he cannot imagine living outside of Argentina. "I like the people here. No one makes you feel like a foreigner," he said.

Mexico’s Solidarity Towards Haitians Only Goes So Far

By Daniela Pastrana
In the airport of this Mexican city, on the border with the United States, customs agents warn that they will carry out a "random" inspection. But it's not so random. The only people who are stopped and checked have dark skin and kinky hair, and virtually do not speak a word of Spanish.

By Edgardo Ayala
Eating healthy and nutritious food in schools in El Salvador is an effort that went from a pilot plan to a well-entrenched programme that has now taken off.

By Edgardo Ayala
Countries in Central America are working to strengthen their regional electricity infrastructure to boost their exchange of electricity generated from renewable sources, which are cheaper and more environmentally friendly.

G77 a Key Partner in Reform of the UN System

By Miroslav Lajčák
When the Charter of Algiers was adopted 50 years ago, it marked the unity of the Group of 77. This unity has not wavered since then.