Print | Send by email
Saima W. Hossain, a licensed school psychologist, is the WHO Goodwill Ambassador for Autism in the South East Asia Region, Chair of the National Advisory Committee on Autism and NDDs in Bangladesh, and Chairperson of Shuchona Foundation 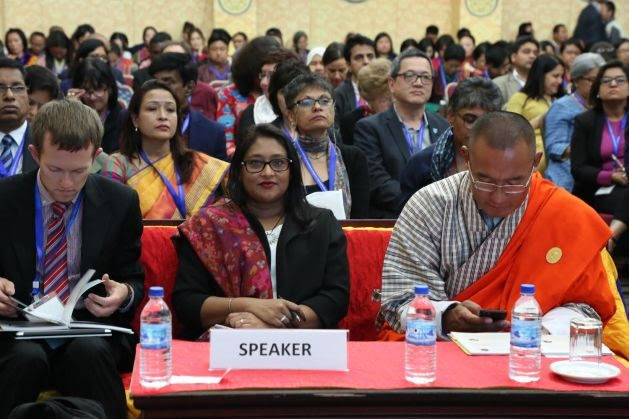 WHO-SEARO Goodwill Ambassador for ASD Saima Wazed Hossain with the Honorable Prime Minister of Bhutan during a ‘Special Session’ featuring self-advocates. Credit: Rohit Vohra, APF
DHAKA, Mar 28 2019 (IPS) - The Kingdom of Bhutan is a landlocked country surrounded by Bangladesh, India and the Tibetan region of China. It is a country that brought the term Gross National Happiness as a concept by which to measure a country’s progress. In April 2017 it celebrated WAAD by hosting the International Conference on Autism & Neurodevelopmental Disorders (ANDD2017) in Thimphu.
Not only did it bring together the senior most political leaders for both countries, Prime Minister H.E. Sheikh Hasina and H.E. Dasho Tshering Tobgay, but also Her Majesty the Druk Gyaltsuen, Jetsun Pema Wangchuk, wife of the King of Bhutan.
The 3-day conference, hosted by the Ministry of Health, Royal Government of Bhutan and co-organized with Ministry of Health & Family Welfare, Bangladesh, WHO-SEARO, Shuchona Foundation, and Ability Bhutan Society, the event was organized without any external funding partners and by invitation only.
The theme, developing effective and sustainable multi-sectorial programs for individuals, families and communities living with autism spectrum disorder (ASD) and other neurodevelopmental disorders (NDDs) was actively discussed through open ended discussions by panels that comprised of experts, care-givers, parents and self-advocates addressing the core challenges faced by families and still left largely unaddressed in the era of the SDGs.
The inaugural ceremony at the Royal Banquet Hall was honored by the presence of Her Majesty the Druk Gyaltsuen, who launched a book titled, Guideline for Differently Abled Friendly Construction published by the Royal Government of Bhutan. 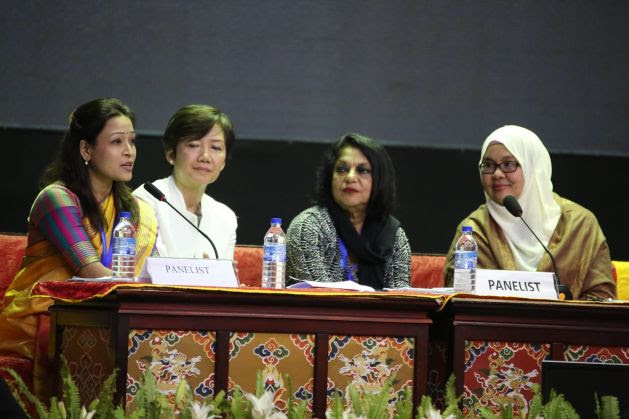 Panelists speaking during the session on ‘Early Identification’. Credit: Rohit Vohra, APF
Followed by speeches by the honored guests, debut of a short film on inclusion produced by Shuchona Foundation and a powerful presentation by Dr. Yolanda Liliana Mayo Ortega, Founder/Executive Director of CASP on ‘The power of two’.

This was followed by a High-Level Discussion on Enabling countries to successfully address ASD and other NDDs as part of their SDGsfeaturing participation by regional directors and representatives of UNICEF, UNESCAP, UN Women, UNESCO, IOM, ILO and WHO, country representatives and experts. Chaired by H.E., Sheikh Hasina, Co-Chaired by Dr. Poonam Khetrapal Singh, Regional Director of WHO-SEARO and moderated by Saima Hossain the discussion focused on common aspirations and not only set the tone of the Conference but the powerful remarks by speakers paved the way for an effective way forward so that children and adults with NDDs can be included in the global development agenda.


The majority of the conference comprised of 5 thematic sessions on identification, intervention, education, employment and independent living. Each session comprised of 2 panels with 7 participants consisting of self-advocates, professionals and caregivers.
The first thematic session discussed community-based early identification systems, focusing on issues in understanding screening vs. diagnostic evaluation and how rigorous methods can be implemented within the health system. Although early identification is of utmost importance, ASD is difficult to identify conclusively before 5 years of age, and panellists recommended that recognizing developmental deficits with the help of parents and caregivers, will ensure that relevant intense interventions are provided and conducted at the community level at the earliest ages possible.
Day 2 sessions focused on issues surrounding Models for Intervention Services and Evidence-based Intervention Programs. Successful examples of various community-based models for intervention delivery was discussed. The panel on Education explored how individuals with ASD and other NDDs have varying levels of skills and benefit from maximum time with same age typically functioning peers. Self-advocate, Dr. Stephen Shore emphasized the need for various models for appropriate education and variety of resources required for inclusion in all settings. 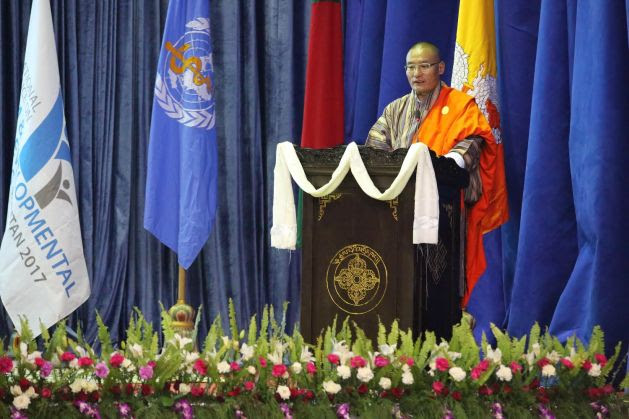 The Honorable Prime Minister of Bhutan speaking at the inaugural ceremony. Credit: Rohit Vohra, APF
A Special Session, featured self-advocates, Dr. Stephen Shore (USA), Daniel Giles (Australia), and Qazi Fazli Azeem (Pakistan) and a special guest Prime Minister  Dasho Tshering Tobgay. While each one’s experience was starkly different, it was an opportunity to showcase the uniqueness of ASD and how no two persons on the spectrum are truly alike.
Despite their differences in experiences, each of them has supportive families, friends, and a sense of community and belongingness. They emphasized the importance of individualized customized approach, the family as the central focus of services, developing a sense of self, as a pathway to effective self-advocacy.
The final day’s panels on employment and independent living focused on human rights and emphasized that the right to employment, earning and self-care is an important but often overlooked aspect of disability; the panellists, shared their successful models for training and living independently with varying degrees of support.
A Round-Table Discussion followed by the launch of the Regional Collaborative Framework for Addressing Autism by the Advisor for Mental Health (WHO-SEARO).
Government, civil society, and international organizations, as well as professional bodies and academia discussed the existing challenges of the treatment gap, lack of awareness and policies, stigma, paucity of financial, institutional and human resources, and the need for a coordinated response and intergovernmental collaboration for inclusive development.
A call was made to ensure cost-effective systematic response that is structured, coordinated and feasible for low-resource countries. In addition to panels, 11 technical workshops on the latest diagnostic and intervention tools, posters, and a side event of the international Early Childhood Development Task Force were held concurrently.
The Conference of 300 stakeholders from 31 countries not only adopted the Thimphu Declaration and Regional Collaborative Framework, but also compiled essential recommendations to ensure international resolutions are effectively implemented in the era of the SDG’s.
Following ANDD2017, the Royal Government of Bhutan has requested Shuchona Foundation to develop a multisectoral national strategic plan for ASD.
Publicado por salud equitativa en 14:18