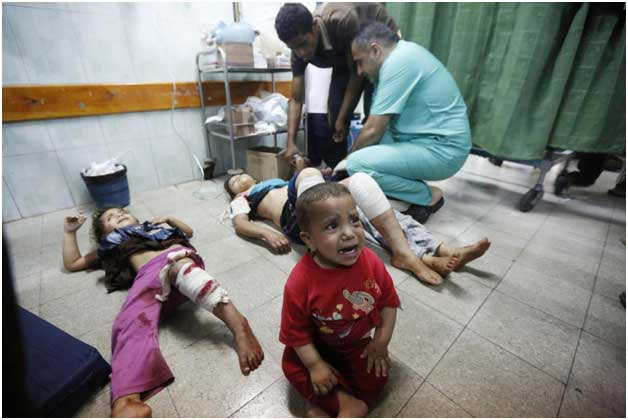 LONDON, Mar 29 2019 (IPS) - The UK Government has announced an aid package to support hospitals in Gaza that are “near breaking point”.
The £2 million package will go to the International Committee of the Red Cross’s 2019 Israel and Occupied Territories (ILOT) Appeal. The aid will contribute to surgical equipment, drugs, wound dressing kits, prosthetics, and post-surgery physiotherapy for up to 3,000 disabled people.
The funding was confirmed by International Development Secretary Penny Mordaunt, who said the UK was “deeply concerned by the crisis in Gaza and the pressure it is putting on hospitals, which are now near breaking point.”
The UK Department for International Development said its aid package is designed to support Gazan hospitals following a sharp rise in trauma patients. Pressure has built on the system after trauma patients numbers increased month-on-month to more than 29,000 over the last year.
Mordaunt added that previous aid had helped prevent the spread of disease, and given people access to healthcare, clean water and sanitation. The UK government has also recently provided a package of emergency food supplies for more than 62,000 Palestinian refugees at risk of going hungry.
The hospitals have reportedly been struggling to keep up with the large numbers of Palestinians injured at recent border demonstrations.
As well as an economic blockade by Israel, Gaza also is under sanctions imposed in 2017 by the Palestinian Authority’s Mahmoud Abbas. Years of economic decline and conflict have left the health sector across the Gaza Strip lacking adequate infrastructure and training opportunities.
The World Health Organisation (WHO) has said the Gazan health system has been “severely affected” by the Israeli blockade which has been in place since 2007. The organisation said healthcare in the strip is beset by recurrent power cuts, deteriorating medical equipment and a lack of spare parts.
Mordaunt added that the UK “supports a return to negotiations to find a lasting political settlement for Palestinians and Israelis,” and is working to address the causes of the humanitarian situation in Gaza through an economic development plan which seeks to boost water and electricity supplies to the territory.
In July 2018, the UK government announced it was set to double aid for economic development in the West Bank and Gaza over the next five years as part of its plan. The funding programme is to increase to £38 million. However, this is far short of Israeli estimates of the funds required to alleviate the humanitarian crisis.
At a meeting in February 2018 of the UN Office for the Special Coordinator for the Middle East Peace Process, Israel reportedly presented a US$1 billion list of infrastructure projects designed to relieve the crisis, including a desalination plant and a major project to link Gaza to Israel’s natural gas fields.
According to the UN’s Office for the Coordination of Humanitarian Affairs, over 90% of the water from the Gaza aquifer is undrinkable and around a third of essential medical drugs are out of stock.
The aid announcement comes amid violent clashes between Hamas and the Israeli military, with exchanges of rocket fire in recent days. The violence is part of a long-running cycle that saw protest against the blockade throughout 2018. The border protest, known as the “Great March of Return”, led to a large numbers of casualties.
According to the WHO’s February 2019 report on the health situation in the Palestinian territories, 266 people have been killed and 29,130 injured, since the start of the mass demonstrations in March 2018.
The Israeli government has also come under criticism from human rights organisations for blocking travel permits for Gazans seeking medical treatment outside the territory.
Human Rights Watch and Amnesty International have called for the lifting of movement restrictions after the Israeli government only approved medical permits for 54 percent of those who applied in 2017, a figure which has slowly declined from 92 percent in 2012.
In 2018, the US struck a blow to Gazan healthcare with a pledge by President Donald Trump to cut all funding to the UN Relief and Works Agency (UNRWA), which services more than 20 health centres in the territory. UNRWA provides healthcare services for the majority of the more than 1.2 million Palestinian refugees in the strip.
The administration decried “the failure of UNRWA and key members of the regional and international donor community to reform and reset the UNRWA way of doing business,” describing its funding practices as “irredeemably flawed”.
UNRWA Commissioner General Pierre Krähenbühl said in November 2018 that the cuts had caused UNRWA’s worst financial predicament since its founding in 1949. In response the agency launched a global campaign, #Dignityispriceless, reducing the shortfall to $64 million following pledges from Gulf states.