Through our global network of local writers, we are continuing our award-winning coverage of global and local environmental challenges, with a focus on the people for whom the ecosphere matters in a direct way: rural dwellers who have little means to protect themselves against adverse conditions; communities that need to switch to sustainable development in order to survive; poor women and children, who are the most vulnerable in natural disasters. Sponsored by the United Nations Environment Program (UNEP), the United Nations Development Program (UNDP) and The World Bank (WB), IPS also maintains the award-winning Tierramérica, a specialised information service on environment and development. 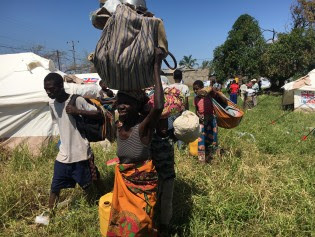 By Amos Fernando
The city of Dondo, about 30 kilometres from Beira, central Mozambique, didn’t escape the strong winds of Cyclone Idai. It is estimated that more than 17,000 families were displaced and more than a dozen schools were destroyed in the city.

By Amina J. Mohammed
2019 will be a defining year for the 2030 Agenda; and the regional forums will pave the way for our first stocktaking on the SDGs in the General Assembly in September.

By Roberto Savio
Since the powerful march of hundreds of thousands of students in 1,000 towns against climate change, an unexpected campaign of delegitimation, ”demystification” and demonisation has started against Greta Thunberg, the Swedish teenager who started the movement. After searching the media, social media and websites, this campaign can be divided into four different groups.

By Sally Nyakanyanga
It was one of the worst tropical cyclones hit Southern Africa in recent times. Cyclone Idai, which has been characterised by heavy rains and flooding including mudslides in some parts of Mozambique, Zimbabwe, and Malawi, has left more than 750 dead, with thousands marooned in remote rural areas, whilst others are still unaccounted for. More than 1,5 million people are affected by the cyclone in the region.

By Jewel Fraser
Fishers in Anguilla saw posted on Youtube this week a video they helped produce that depicts the impacts of climate change on their industry. Titled “Anguilla’s Fishing Dilemma”, the four-and-a-half minute video highlights some of the main challenges Anguilla’s 92 licensed fishers face in earning a living.

By Richard Mahapatra
The India Meteorological Department (IMD) on January 16 declared that 2018 was the sixth- warmest year in the last 117 years or since 1901, when recording started. Pointing towards changing weather and climate parameters, it also noted that the last monsoon rainfall was the sixth-lowest since 1901.

By Edgardo Ayala
For nearly three decades, several communities in southeastern El Salvador have collectively and efficiently managed the water they consume, but monoculture production and climate change put their water at risk.

By Desmond Brown
In 2008, the then president of Guyana, Bharrat Jagdeo, established within the Ministry of the Presidency the Office of Climate Change. Guyana became the first country in the region to do so. A year later, Jagdeo set out a vision to forge a new low carbon economy in the Caribbean nation.

The Destruction of the Environment: An Unfolding Tragedy for Humanity

By Jon Hall
Late last year the World Wide Fund for Nature released their Living Planet Report for 2018. WWF’s estimates were stark: populations of mammals, birds, fish, reptiles, and amphibians have, on average, declined by 60 percent between 1970 and 2014.

The System, Youth and Democracy

By Roberto Savio
If we ever needed proof of how the political system has become self-referential and unable to update itself, the latest student march in more than 1,000 towns is a very good example.

‘We should not use groundwater for the next 15/20 years’

By Naznin Tithi
The depletion of groundwater table in Dhaka has made water crisis in the city acute, especially during the dry season. What are the reasons behind this? We have conducted many research studies in the last 15/20 years and have found that Dhaka's groundwater table has been gradually depleting at an average rate of one metre or 30/40 centimetres sometimes. Because of the rapid urbanisation of the city, the demand for groundwater has been increasing. In the multi-storied buildings and towers that are being constructed, high-powered pumps are used to extract water from underground. This contributes significantly to the lowering of the groundwater table. In Dhaka, there is no water in the shallow aquifers (50-70 feet deep). Presently, water is being extracted from the intermediate and deep aquifers, which are 600 to 800 feet deep.

9 of the 10 Worst Global Risks are Linked to Water

By Jens Berggren
Every year, the World Economic Forum asks some 1,000 decision-makers from the public sector, business, academia and civil society across the globe to assess the risks facing the world over the decade to come.

By IPS World Desk
Water is a precondition for human existence, and for the sustainability of our planet. It is entwined with almost everything human, from climate change and global economy to gender issues and human rights.

By Emilio Godoy
Minerva Montes lost her home on Holbox Island in 2005 when Hurricane Wilma hit the Yucatan Peninsula in southeastern Mexico. Rebuilding her home was quicker and easier than overcoming the psychological aftermath of the catastrophe.

By Thalif Deen
The United Nations has vowed to eradicate extreme hunger and malnutrition on a self-imposed deadline of 2030. But it is facing a harsh realty where human-induced climate change – including flash floods, droughts, heatwaves, typhoons and landslides-- is increasingly threatening agriculture, which also provides livelihoods for over 40 per cent of the global population.

By Alison Kentish
In 2015, the Caribbean was “the region that could” on the climate change scene. Countries rallied under the ‘1.5 to Stay Alive’ banner, in the face of an existential threat. The now former Sustainable Development Minister of Saint Lucia Dr. James Fletcher emerged as a climate change champion at the time. But now, three years on, the scientist is giving regional climate action a C- in an assessment.

By Monika Weber-Fahr
I am drafting this on International Women’s Day - March 8 - with an eye towards World Water Day on March 22. On International Women’s Day we celebrate progress in gender equality. At the same time, we recognize how much remains to be done: how many women remain excluded from decision-making across many professions. Changing this is urgent. Water – clean and accessible – is getting scarcer at an alarming rate. While working to change this, we cannot afford to exclude women.

US Survey Finds Lack of Awareness on Global Warming

By Yash Bhandari
The U.N.’s World Water day is fast approaching as the state of the world’s consumable water supply remains dismal. Billions of people face at least the very real risk of scarcity, if they’re not facing scarcity already; and about a third of the world’s groundwater systems are in danger of becoming depleted.

Seven Challenges for US Nominee for World Bank President

By Masood Ahmed
All incoming World Bank presidents bring a public record of their views about the bank and about development more generally. David Malpass, who is on track to become the bank’s next president, has not been shy in criticizing the role and management of the institution he now plans to lead.

Climate Strike: Hundreds of Thousands Unite for the Planet’s Future

By Maged Srour
Friday, Mar. 15 saw hundreds of thousands of young people across the world take to the streets to join the climate strike. “We are demonstrating today for our planet and for our future. This is the place where we and those who come after us will live,” Jennifer, a 16-year-old girl from Rome, the Italian capital, who opted to join the protests, told IPS.

By Jonathan Farr and Samia Mallik, WaterAid
The stakes are high for women when faced with a warming world – their livelihoods jeopardised by labour markets that tend to put men first, their family responsibilities increasing rapidly in the face of droughts and flooding, and politicians who refuse to acknowledge the challenges they face. The story of those living on the frontline of a harsher climate is simply not being heard.