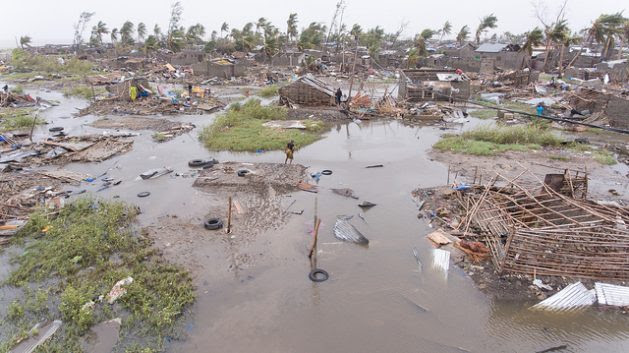 Cyclone Idai’s aftermath in Mozambique. Credit: Denis Onyodi:IFRC/DRK/Climate Centre
HARARE, Mar 28 2019 (IPS) - It was one of the worst tropical cyclones hit Southern Africa in recent times. Cyclone Idai, which has been characterised by heavy rains and flooding including mudslides in some parts of Mozambique, Zimbabwe, and Malawi, has left more than 750 dead, with thousands marooned in remote rural areas, whilst others are still unaccounted for. More than 1,5 million people are affected by the cyclone in the region.
Almost two weeks after the cyclone hit, many of the areas have not been accessible as roads, bridges, homes were completely destroyed and communication cut off making it impossible for the rescue teams to provide support in the affected areas.
But as people begin to pick up the pieces of their lives, and as aid pours into the region from all corners of the world, questions are being asked about the disaster preparedness of many countries.
While the highest tolls of those affected are from Mozambique, eastern Zimbabwe was also hard hit by Cyclone Idai. There, large areas of water bodies are present where homes once were.
Meteorology and Early warning systems
Claris Madhuku, director for Youth Development Trust, a community-based nonprofit organisation based in Zimbabwe’s Chipinge and Chimanimani areas (the areas most affected by the cyclone), tells IPS that information provided by Zimbabwe’s meteorological department ahead of Cyclone Idai making landfall had been insufficient to prepare people of the danger.
In addition, many people did not have the capacity to cope with the cyclone and there were no safe alternative places for communities to flee to in the event of an evacuation.
“As an organisation we only managed to provide information on the cyclone by word of mouth as well as social media, in this case What’s app, which is rarely taken seriously as it is often seen as a gossip platform,” says Madhuku.
The country’s Civil Protection Unit, which is part of Zimbabwe’s Local Government Ministry, had told people to move to higher ground. It was a case of being between a rock and a hard place, as even those who sought refuge at high-lying areas were affected by mudslides.
Climate change expert, Dr. Leonard Unganai stated that almost every season tropical cyclones form in the southern hemisphere, but only five percent tend to make a landfall.
But since 2018 was the warmest year on record, as seen by the droughts and dry spells that characterised the 2018/2019 farming season, this created conducive conditions for cyclones to form.
“A tropical cyclone requires energy that’s why they tend to form mostly on the ocean as the ocean temperatures are a bit warm. Furthermore, with climate change, a situation whereby surface temperatures are rising even the oceans are warming up which creates favourable conditions for these extreme weather events to form,” says Unganai, adding that there is likely to be an increase in terms of the intensity of the severity of the cyclone system.
“We have a warm atmosphere and warm oceans such that when they strike they tend to cause a lot of destruction,” Unganai tells IPS.
Climate change adaptation and mitigation.
Unganai advised that there should be more awareness and education around climate change. In the case of Cyclone Idai there was lack of preparedness and people underestimated the gravity or amount of rain that would fall.
Local rescue operations in the aftermath have not all been effect as in some cases people resorted to using shovels and hoes to dig up rocks and trees. The lack of adequate equipment and tools to undertake rescue operations has been obvious and the country has turned to neighbours and other partners for assistance. South Africa has offered sniffer dogs in order to identify dead bodies trapped under boulders.
“There is a lot of panic as there is a mismatch of official statistics available about people who are missing, pointing to the fact that more people could have lost their lives,” Madhuku notes.
There is obviously a need for governments to put in place measures and systems to ensure adequate support and disaster mitigation.
“We still going to get tropical cyclones affecting lives, we need to map areas that are susceptible – having long term plans to deal with future cyclones if they happen. Ideally we need to ensure that every part of the country should have some level of preparedness,” Unganai advises.
Where people are housed after a natural disaster is also import.
Some areas in Chimanimani and Chipinge had preciously designated for plantations, but in the aftermath of the cyclone there are settlements of people seeking shelter.
Madhuku remembers back in 2000 when Cyclone Eline affected communities in the eastern part of the country. People had fled the destruction and ended up erecting permanent structures on the river banks and below the mountains.