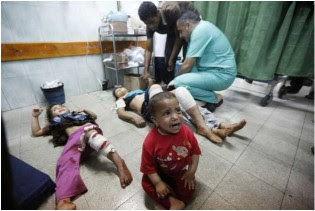 By Roger Hamilton-Martin
The UK Government has announced an aid package to support hospitals in Gaza that are “near breaking point”. The £2 million package will go to the International Committee of the Red Cross’s 2019 Israel and Occupied Territories (ILOT) Appeal. The aid will contribute to surgical equipment, drugs, wound dressing kits, prosthetics, and post-surgery physiotherapy for up to 3,000 disabled people.

Bridging the Gaps for the Disabled

By Tharanga Yakupitiyage
People with disabilities are being left behind, and steps must be taken to ensure their inclusion in the world of education and work.

By Porimol Palma
(The Daily Star) - A transnational human-trafficking syndicate committed crimes against humanity in Malaysia and Thailand against the Rohingya from 2012 to 2015, the Human Rights Commission of Malaysia (SUHAKAM) and Fortify Rights, a nongovernment rights body, have found in a six-year investigation.

By Thalif Deen
The widespread political repression in countries such as the Philippines, Egypt and Saudi Arabia-- and rising right-wing nationalism in the US, Brazil, Italy, India, Poland and Hungary-- have increasingly triggered attacks on human rights and civil society organisations (CSOs).

By Kazuo Yamaguchi
Japan is not making progress in gender equality, at least relative to the rest of the world. Despite the Japanese government’s attempts in recent years to pass legislation promoting the economic activity of women, Japan ranked a miserable 110 out of 149 in the World Economic Forum’s 2018 Gender Gap Index, which benchmarks countries on their progress toward gender parity across four major areas.

Two journalists held in pretrial detention since February in Comoros

By Editor, CPJ
(CPJ) – Authorities in the Comoros should immediately release journalists Abdallah Abdou Hassane and Oubeidillah Mchangama, who have been held in pretrial detention on an array of charges for over a month, the Committee to Protect Journalists said today.

By A. D. McKenzie
Amid the morass of Brexit and continuous debates on immigration, a French museum has launched a thought-provoking exhibition about music and migration.

Q&A: “The Knowledge of Local Challenges Can Only Come from Working with People”

By Saahil Kejriwal and Rachita Vora
The remarkable story of an Adivasi lawyer and social activist who has led peoples’ movements against state development policies, and sought redress for human rights violations of his people in conflict-ridden regions of Maharashtra.

Q&A: Why Treating Leprosy as a Special Disease Violates the Rights of the Person Affected by It

By Stella Paul
His multiple awards and degrees aside, Dr. Arturo Cunanan is known as a people’s doctor; one who has profound belief in the human rights of every person affected by Hansen’s disease, commonly known as leprosy.

Words Matter: Trump and the Massacres in Christchurch

By Jan Lundius
These lyrics are from Fire, the only hit by The Crazy World of Arthur Brown, which in 1968 sold over one million singles. Brenton Tarrant played it in his car while he triumphantly left the Al Noor Mosque in Christchurch, New Zealand. He had just gunned down around 100 unarmed worshippers and was on his way to another mosque to continue the slaughter before Friday prayers ended on 15 March. His murderous rampage finished by the Linwood Islamic Centre, where he could not find the entrance. He shut a man and his wife, whom he encountered outside the building and then shattered a window with a hail of bullets, killing five more inside, while he shouted that everyone had to leave the mosque. A courageous shop keeper rushed out and throw a credit card reader at Tarrant, who rushed back to his car followed by the shop keeper, who shattered the windshield with a handgun he had picked up from the ground. Tarrant run away, but was almost immediately restrained by police who had been able to trace him.

By Daniel Gutman
Communication can be a key tool for the development of cooperation among the countries of the global South, but the ever closer relations between them do not receive the attention they deserve from the media.

By Shariful Islam
Mominur Islam had paid Tk 3 lakh to some manpower brokers in Naogaon to go to Malaysia as a worker. The brokers, who were actually members of a human trafficking gang, sent him to Benghazi of Libya where he was confined to a den and tortured on a regular basis for ransom.

By Editor Human Rights Watch
World Water Day on March 22, 2019 is a reminder that many of Canada’s First Nations communities do not have safe drinking water, Chiefs of Ontario and Human Rights Watch said today.

By Editor, CPJ
(CPJ) – Zambia's minister of information and broadcasting should grant an appeal requested by the privately owned Prime TV broadcaster and allow the station back on air after the country's media regulator suspended its license for 30 days for alleged unprofessionalism, the Committee to Protect Journalists said today.

‘We must all work together to defeat hatred and xenophobic discourse against the Other and nurture acceptance and empathy,’ say eminent panellists in a conference held at the UN

By Geneva Centre
(Geneva Centre)– The rise of exclusionary politics and xenophobic discourses can only be addressed by embracing diversity and promoting empathy between people, it was concluded in a panel debate held yesterday at the United Nations Office in Geneva.

By Marites Sison
When the most devastating flood in Bihar’s history came in 1987, Renu Devi recalled that the rampaging waters and landslides had swept away people who were sleeping, along with their beds.

By Rose Delaney
South Florida has long been known as a haven for refugees and migrants. Widely referred to as the “gateway to Latin America”, 1 in every 5 Florida residents is an immigrant. Significantly, the “sunshine state” welcomes 1,000 new settlers every day.