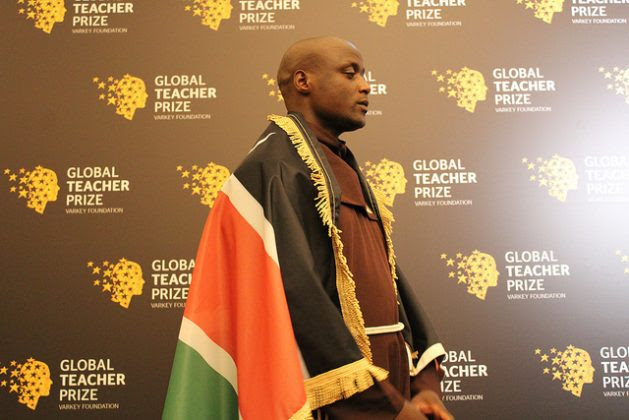 Maths and physical science teacher Peter Tabichi picture after the Keriko Mixed Day Secondary School teacher has won the one million dollar Global Teacher Prize at a ceremony in Dubai. Credit: Busani Bafana/IPS
DUBAI, Mar 25 2019 (IPS) - A maths and physical science teacher from an impoverished  school in Kenya’s Rift Valley, Peter Tabichi, has won the one million dollar Global Teacher Prize, becoming the first teacher from Africa to clinch the prize established to honour the profession.
Tabichi (36) emerged the winner from a top list of 10 nominees from Brazil, Georgia, Netherlands, United Kingdom, India, United States, Argentina, Australia and Japan.
“I cannot believe it,” Tabichi, told IPS at a press conference after he was named winner. “This is a motivation for teachers in Kenya, Africa and the world. It affirms that teaching is the best profession and I will continue to make a change by teaching.”
The Global Teacher Prize is the largest prize of its kind that recognises an exceptional teacher who has made an outstanding contribution to the profession but also to highlight the important role of teachers in society. 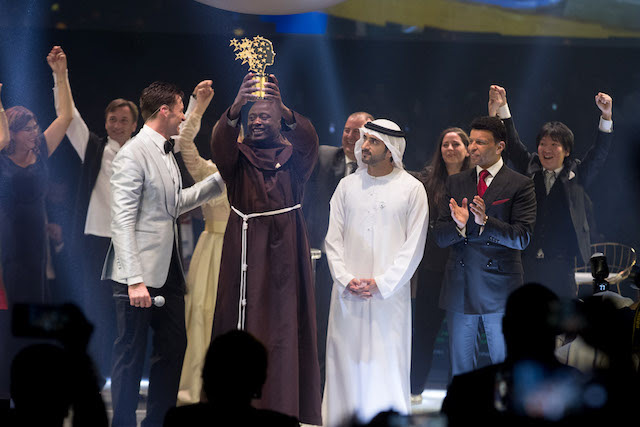 Actor Hugh Jackman announced that Kenya teacher Peter Tabichi was winner of the Global Teacher Prize. Courtesy: Global Education and Skills Forum – an initiative of the Varkey Foundation
Actor Hugh Jackman announced Tabichi’s name at a glittering ceremony that sent the packed hall into thunderous applause. Tabichi was recognised for his dedication, hard work and passionate belief in his students’ talent. Thanks to his efforts the poorly resourced Keriko Mixed Day Secondary School in Nakuru County, in remote rural Kenya, has emerged victorious after taking on the country’s best schools in national science competitions.

Citing his father as his inspiration for becoming a teacher, Tabichi, a member of the Franciscan Brotherhood, gives away 80 percent of his monthly income to help the poor students in his school, many of whom come from poor families–almost a third are orphans or have only one parent–with many going without food at home. The students have difficult experiences ranging from drug abuse, teenage pregnancies, early school dropout, young marriages and there have been cases of suicide.
The school itself has only one computer, a poor internet connection, and a student-teacher ratio of 58:1.
“Every day in Africa we turn a new page and a new chapter,” said Tabichi. “This prize does not recognise me but recognises the continent’s young people…as a teacher working on the frontline I have seen the promise of its young people—their curiosity, talent, their intelligence and their belief.”
The story of Africa, a young continent bursting with talent
Kenya’s President Uhuru Kenyatta, congratulated Tabichi on winning the award in a special video message broadcast at the ceremony in which he described Tabichi as a shining example of what the human spirit can achieve, not just for Kenya and Africa, but also for the rest of the world.
“Peter your story is the story of Africa, a young continent bursting with talent,” Kenyatta said. “Your students have shown that they can compete among the best in the world in science, technology and all fields of human endeavour. All we need is to give them the right support.”
The Global Teacher Prize, open to all working teachers, is part of the Varkey Foundation’s commitment to improving the status of teachers across the world. In their Global Teacher Status Index in November 2013—the first attempt to compare attitudes towards teachers in 21 countries—the study found that between a third and half of the parents surveyed would ‘probably’ or ‘definitely not’ encourage their children to enter the teaching profession. The Global Teacher Status index in 2018 showed for the first time a direct link between teacher status and pupil performance as measured by PISA scores.
“I want to congratulate Peter Tabichi for winning the Global Teacher Prize 2019. I hope Peter’s story will encourage others to enter the teaching profession and shine a spotlight on the truly inspiring work teachers do to make tomorrow brighter than today,” said Sunny Varkey, founder of the Varkey Foundation.
In an earlier interview with IPS Tabichi said if he won he would use the prize money strengthen the Talent Nurturing Club, the Science Club and inter-school science project competitions at the school.
He also planned to “invest in a school computer lab with better internet connectivity.” And said that he would also promote kitchen gardening and production of drought tolerant crops in the community at large.