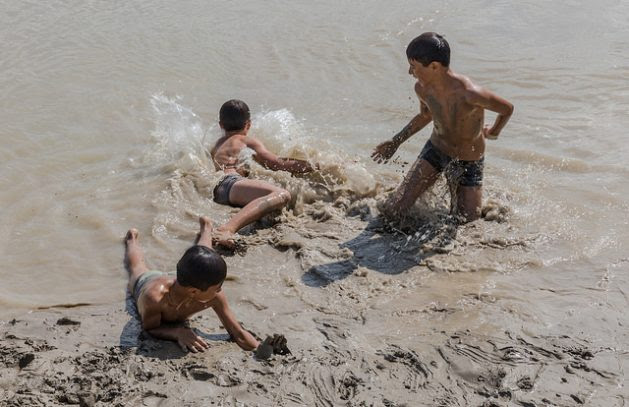 Kazakhstan boys swim in muddy water of Syr Darya river. Parliamentarians from Kazakhstan are advocating for youth employment opportunities, healthcare services, and educational possibilities at a regional, national and global level. Credit: Ninara/CC By 2.0
UNITED NATIONS, Oct 23 2018 (IPS) - Parliamentarians from 36 countries met this weekend in Astana, Kazakhstan, to discuss the future of youth in Central Asia and the Asia-Pacific region. The gathering called “International Conference on Investing on Youth: Leaving No One Behind” took place on the Oct. 19 to 20, and the goal was to advance the Sustainable Development Goals (SDGs), set by the United Nations, with regards to youth.
Keizo Takemi, Member of Parliament (MP) from Japan and chair of the Asian Forum of Parliamentarians on Population and Development (AFPPD), told IPS: “We would like to reach a broad consensus among the participants that investment in youth is a core part of the investment of human capital.”

Kazakhstan and the Asian Population and Development Association (APDA) have long been concerned with the future of youth in Asian countries. Parliamentarians from the region have turned to this issue, advocating for youth employment opportunities, healthcare services, and educational possibilities at a regional, national and global level.
Given that 60 percent of the world’s youth lives in Central Asia and the Asia-Pacific region, their concern with youth is justified. According to World Bank data, the majority of young people in these regions is literate, and healthy. Thus, the parliamentarians at Astana focused mainly on three issues: healthcare information and access, civil participation and increased employment opportunities for the youth.
Two hundred participants attended the conference at the Rixos President Astana Hotel. The two-day event was organised by the Parliament of Kazakhstan, the ministry of social development in Kazakhstan and the APDA, funded by the U.N. Population Fund (UNFPA) through the Japan Trust Fund.
Event’s agenda
Of the 200 participants that attended the conference, 90 were from Kazakhstan and 110 from abroad. Among them, there were parliamentarians, international experts and representatives from U.N agencies, NGOs, academia and the private sector.
The two-day event opened with the remarks of G. I. Issimbayeva, deputy chairperson of the Mazhilis of the Parliament of the Republic of Kazakhstan, and closed with Takemi and Issimbayeva’s comments.
During the conference, there were four main sessions which included panels. The first three sessions took place on Friday. The first one focused on education and employment, featuring speakers such as Ato Brown, World Bank country manager, and Madina Abylkasymova, from the ministry of labour and social protection of population in Kazakhstan.
The second one talked about health, with speakers like Keizo Takemi and Soyoltuya Bayaraa, from UNFPA. The last session of the day concentrated on youth participation in civil, political and social affairs, with representatives such as Tatyana Lebedeva, Russia’s MP, and Bakhtyar Maken, Republic of Kazakhstan’s MP.
Finally, the fourth session occurred on Saturday, and it dealt with opportunities for youth in globalisation, with Vitalie Vremis U.N. Development Programme as moderator.
Takemi, Chairman at AFPPD, talked at the conference on improving universal access to health information and services for youth. He shared with IPS his thoughts on how health relates to gender. “There are many gender-related issues on investment in youth and in access to healthcare services. We, at AFPPD, have always kept a comprehensive framework on population related issues, including gender empowerment, investment in youth and active ageing,” he said.
UNFPA is another crucial organiser of the meeting. It has supported the region’s parliamentarians in investing in youth, by raising awareness through gatherings. In 2016 UNFPA, AFPPD and APDA launched the “G7: Global Conference of Parliamentarians on Population and Development,” where the participants committed to improve quality of education and health services, employment and gender equality among the youth.
All these issues remain intertwined, explained Takemi. “Each building block is related to each other. Therefore, when we highlight investment in youth, simultaneously we must take into account gender and ageing.”
No one left behind – including the youth
These gatherings aim to advance the SDGs and translate them to the national context. “The SDGs means that no one is left behind. That broad consensus can be the basis on which many MPs bridge national boundaries,” stated Takemi.
Specifically, the “International Conference on Investing on Youth” wanted to increase awareness of the need for a cross-sectoral and inter-ministerial approach to resolve the problems identified by the parliamentarians.
It also aimed to include policies related to the youth in their implementation of the SDGs at a national level. Those policies would vary depending on the country and the overall situation of their youth. With the World Bank’s Human Capital Project, countries can keep track of their youth’s needs. Takemi said: “I really hope the heads of the states recognise where they are through resources of the human capital through the World Bank.”
But one type of policy is not enough. A multilateral approach is needed. Takemi stated: “In order to achieve SDGs by 2030 we should have cross sectoral policy concept. Each goal and target can’t be achieved by isolated players and sectors.” He continued: “Investment in youth, education, vocational training, employment policies should be combined through a cross-sectoral conceptual framework, such as investment in human capital.”
Takemi concluded: “I myself recognise investment in youth should be the core of the investment in human capital.”