Justice Kavanaugh gets to work

Justice Kavanaugh gets to work

Last night, history was made as Brett M. Kavanaugh became the 114th Justice of the United States Supreme Court. Retiring Justice Anthony Kennedy administered the oath—the first time ever that a Justice has sworn in a former clerk to take his seat.
With his left hand on the Bible and right hand raised in the air, Justice Kavanaugh swore to be a faithful, impartial arbiter of the law. “On the Supreme Court, I will seek to be a force for stability and unity,” he said during yesterday’s ceremony at the White House. “My goal is to be a great Justice for all Americans and for all of America.”
The work begins immediately. Justice Kavanaugh took his seat this morning, hearing oral arguments for the first of several important cases this week. During last night’s ceremonial swearing-in, the American people saw a glimpse of how our nation’s newest Justice will approach these responsibilities.
“The Supreme Court is an institution of law. It is not a partisan or political institution,” he said. “The Justices do not sit on opposite sides of an aisle. We do not caucus in separate rooms. The Supreme Court is a team of nine, and I will always be a team player on the team of nine.”
Watch highlights from Justice Kavanaugh’s swearing-in ceremony.
The reaction: See the widespread support for Justice Kavanaugh’s confirmation

A message from President Trump on Hurricane Michael

With Hurricane Michael quickly approaching landfall, President Trump has a clear message for people living in or near the Florida Panhandle region: The federal government is prepared to help in any way possible. “FEMA is ready.”
Today, the President approved an emergency declaration for the state of Florida, giving first responders the support needed to keep people safe. The President’s authorization specifically allows FEMA to mobilize equipment and other resources to help lessen the impact of the storm.
FEMA expects sea levels to rise as the storm makes landfall, and it urges all Floridians to take the potential storm surge and other safety threats seriously. “The window of time to prepare is quickly closing for those in the path of Hurricane Michael. According to NOAA NWS National Hurricane Center, tropical storm conditions will start tonight,” FEMA shared on Facebook today.
See President Trump’s emergency declaration for Florida.
How to prepare: FEMA’s latest update on Hurricane Michael 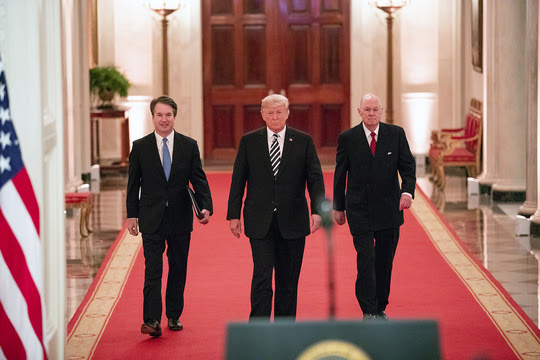