Will the Next War Be About Water? | Inter Press Service

Will the Next War Be About Water? | Inter Press Service

Will the Next War Be About Water?

Print | Send by email
Ramu Damodaran is Editor-in-Chief of the UN Chronicle and Chief of the United Nations Academic Impact—a vibrant network of more than 1200 academic and research institutions around the world which are committed to supporting UN’s goals and ideals. 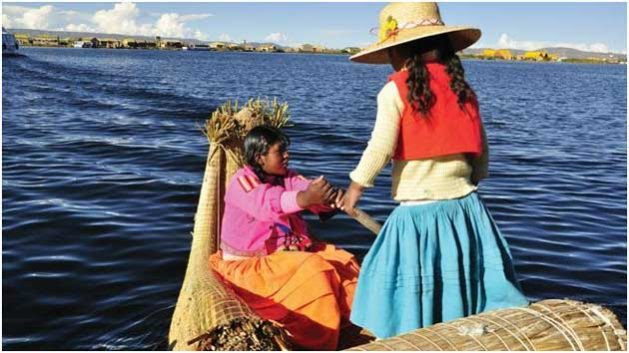 Two young women row in Lake Titicaca, the highest commercially navigable body of water in the world, near the Uros Islands, Puno, Peru.
UNITED NATIONS, Mar 19 2018 (IPS) - One of the first resolutions adopted by the United Nations General Assembly, on the location of the headquarters of the Organization, gives the United Nations “exclusive rights over the subsoil of land conveyed to it, and in particular the right to make constructions underground and to obtain therefrom supplies of water.”
That was, in many ways, a metaphor for the rights of “we the peoples” who had constituted the United Nations and their legitimate claim to the fertile wealth of the land that was their home. It was also a metaphor in another sense, a reminder that no matter how vast the visible, the invisible can too be attained.
Water is visible in Juba, South Sudan’s capital on the southern edge of the Nile, but just shy of its city limits, in the community of Munuki, wells are dug deep into for invisible, and often contaminated, drinking water. UNMISS, the UN Mission in South Sudan, created a wholly new hydrosystem in the area, bringing clean water to the surface with the turn of a tap.
An ocean away, in Vietnam, the UNICEF Tap Project encourages patrons in restaurants to donate a dollar or more for the tap water they usually enjoy for free, creating funds to bring the same water to children denied its access.
Just west, the National University of Singapore devises a “drainage block” to “improve water harvesting, and to create a much larger base flow that is required for beautification of urban canals” as part of the World Intellectual Property Organization’s “WIPO Green” database.
Arc north to Tashtak, in Kyrgyzstan, where children had to cross the country’s busiest road to fetch water from nearby villages; every few weeks a child was struck and injured by a car or truck. Despite contributions from every resident of Tashtak, a project to put standpipes in the street was still short of the total needed. UNHCR then stepped up to fill the funding gap under the peacebuilding project, supported by the UN Peacebuilding Fund; the refurbishment took about seven months to complete and provided 12 standpipes throughout the village which now provide clean, fresh water to about 800 people.
These vignettes, of how each UN office or agency has its contribution to make to a universal need and, like our cover, quest for water, find echo in this issue. When the General Assembly requested its President to convene a working-level dialogue to discuss improving the integration and coordination of the work of the United Nations on the water-related goals and targets under its sustainable development pillar, it decided that it “shall be ad hoc, informal, inclusive, open-ended and interactive.” We hope this issue too is informal, inclusive and open-ended. And that, with your shared thoughts and responses on the Water Action Decade and Sustainable Development Goal 6, it will be interactive as well.
“People are saying that the next war will be about water,” President of the General Assembly Miroslav Lajčák said at a gathering of students at Seton Hall University, a member of the United Nations Academic Impact, a few months ago. “Let’s make sure there will be no next war and let’s make sure that we treat water the way it deserves.”
From the UN chronicle
https://unchronicle.un.org/
Publicado por salud equitativa en 7:35