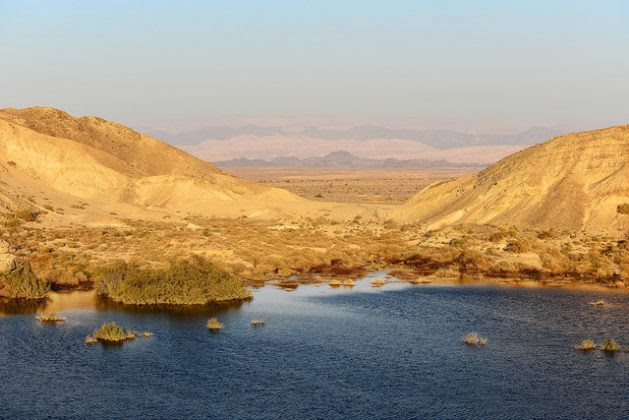 Water In Judean Desert - Credit: Bigstock
ROME, Mar 15 2018 (IPS) - This year, World Water Day, celebrated annually on 22 March, is themed “Nature for Water”, examining nature-based solutions (NBS) to the world’s water problems.
The campaign – “The Answer is in Nature” – promotes a sustainable way to normalize the cycle of water, reduce harms of climate change and improve human health through planting trees to replenish forests, reconnecting rivers to floodplains, and restoring wetlands.
An estimated 2.1 billion people have no access to drinkable water because of the polluted ecosystems affecting quantity and quality of water available for human consumption. At the same time, the number of individuals living in the water-scarce areas equals 1.9 billion and may reach 3 billion by 2050, while about 1.8 billion people drink water coming from an unimproved source which puts them at risk of water-borne diseases. All of these negatively influence human health, education and livelihoods. 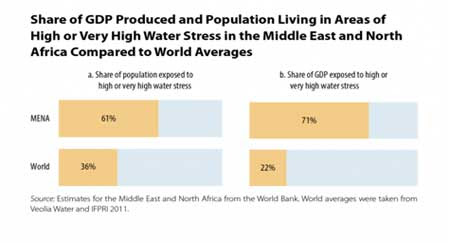 The most water-scarce region in the world is the Middle East and North Africa (MENA) where more than 60% of the population has little or no access to drinkable water and over 70% of the region’s GDP is exposed to high or very high water stress.
Water scarcity in MENA involves multiple factors such as climate change leading to droughts and floods, low water quality, and poor water management in the context of fragility, conflict, and violence. This is one of the reasons why at the World Economic Forum 2015, experts on the MENA region stated that the water crisis is “the greatest threat to the region—greater even than political instability or unemployment”.
Poor water quality in the region is caused by unsustainable water consumption, pollution and untreated wastewater. The cost of these in the region represents 0.5-2.5% of the GDP annually. This causes multiple problems, ranging from waterborne diseases to the pollution of fresh water necessary for ecosystem services such as fisheries. For this reason, according to the International Union for Conservation of Nature, 17% of freshwater species in the region are on the brink of extinction. 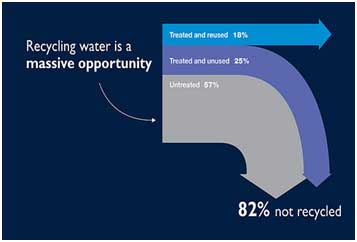 Globally, MENA reports to have the highest loss of freshwater in its food supply chain. Some MENA countries lose from 80 to 177 cubic meters per capita of freshwater resources in the food supply annually. At the same time, MENA does not collect half of the wastewater and returns 57% of the collected wastewater to the environment untreated, causing health problems and high level of wasted water resources.
Climate change is one of the main factors leading to the increased water stress. It causes decreased rainfalls (in some parts of the world) and an increase in temperatures which influence water supply and demand. Climate change also increases surface water stress in the countries with political and environmental problems.
For this reason, regarding MENA, scientists predict that Iraq, Lebanon, Jordan, Morocco, and Syria will experience high “surface water stress” in the following years. At the same time, climate change leads to the sea level rise that increases possibility of floods which are the most frequent natural disasters in MENA. It should also be recognized that the most vulnerable group of people to the “weather-related shocks” is the poor part of the population.
Precisely planned water management is needed to sustainably solve water problems and to propose water services affordable for both consumers and governments. At the same time, water management is necessary to reduce costs and social instability followed after floods, droughts and water scarcity as water problems can contribute to the economic, social and political unrest in the countries. In 2016, World Bank estimated that MENA will lose 6-14% of its GDP because of water scarcity caused by climate change by 2050.
As climate change and damaged ecosystems play an important role in water-related problems, NBS would represent a sustainable way for solving the challenges. The main goals of NBS are the following: 1) increasing water supply and availability; 2) improving water quality; and 3) managing risks.
Hence it follows that NBS can contribute to the following SDGs: zero poverty and hunger, good health, increased employment, affordable and clean energy, industry, infrastructure and innovation, sustainable cities and communities, and responsible consumption and production.
One of the main contributors to the solution of water-related problems is the World Water Council, an international organization which leads World Water Forums every three years. On 18-23 March 2018, WWC organizes the 8th World Water Forum in Brazil to lead the decision-making process on water in order to achieve sustainable management of the resource.
The organization’s political and institutional scope transforms the Forum into democratic dialogue between people from different sectors of international community.