Wake Up And Stop Rohingya Abuses

Print | Send by email
“This is clearly, clearly, clearly genocide that is going on by the Burmese government and military against the Rohingya people."
Mairead Maguire
Feb 27 2018 (The Daily Star, Bangladesh) - No one would realise better than a woman how it feels when a child is snatched away from the arms of a mother and slaughtered, a man is murdered before the eyes of his wife, or a girl is raped.
That is what happened to countless Rohingya women back in Rakhine State of Myanmar.
As three Nobel laureates listened to such harrowing tales of tortured women and children one by one in the refugee camps of Cox’s Bazar, they could not hold tears back.
The trio, all of them mother themselves, then urged Myanmar’s de facto leader and their fellow Nobel laureate Aung San Suu Kyi to speak out about violence against the Rohingyas, often dubbed one of the most persecuted minorities in the world.
They implored her to “wake up” to the brutalities, warning she otherwise risks prosecution for “genocide”.
The three Nobel Peace Prize winners — Tawakkol Karman, Shirin Ebadi and Mairead Maguire — demanded those responsible for the atrocities in Rakhine should be hauled to the International Criminal Court.
“We appeal to Aung San Suu Kyi, our sister laureate. Think of your children being pulled off your arms, because you are a mother, and massacred and villages burnt,” said Maguire, who is from Northern Ireland.
“Don’t deny the Rohingya people their right to life,” she said in an emotion-choked voice after listening to the Rohingya women at Thyangkhali refugee camp in Ukhia of Cox’s Bazar yesterday.
A violent military crackdown launched last August sent 700,000 Rohingyas fleeing to Bangladesh, sparking an unprecedented humanitarian emergency in the border district where the refugees are now sheltered in teeming, squalid camps.
Accounts of mass killing, rape, looting, burning of villages and shooting of civilians kept coming with the refugees over the months, while global condemnation poured in for the army campaign which the UN termed a “textbook case of ethnic cleansing”. 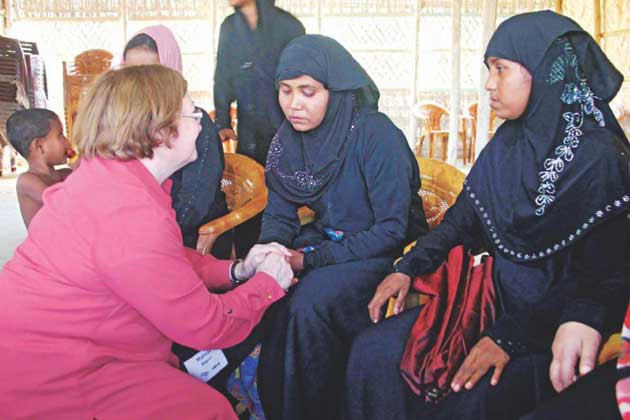 Nobel Peace Laureate from Northern Ireland Mairead Maguire talking to a Rohingya refugee during her visit to Kutupalong refugee camp in Ukhia on Sunday. Photo: AFP/collected
Yemen’s Tawakkol Karman said it is time Aung San Suu Kyi woke up, or she will be one of the perpetrators of the crime.
“If she could not stop all this crime, she has to resign now. It is very important,” she said, adding Suu Kyi otherwise could be prosecuted at the International Criminal Court.
“We, women Nobel laureates, call for those criminals prosecuted at the ICC … so we don’t expect our sister Aung San Suu Kyi to be one of them in the future. If she will continue her silence, she will be one of them.”
The Nobel laureates came to Bangladesh on Saturday and began a visit to the Rohingya camps to assess the allegations of violence against Rohingya women and the overall refugee situation.
The Nobel Women’s Initiative, a platform of six female peace laureates established in 2006, is organising the visit in partnership with Naripokkho. On Sunday, they visited the refugee camps in Kutupalang and Balukhali.
They held a meeting with Refugee, Relief and Repatriation Commissioner Abul Kalam in Cox’s Bazar yesterday morning and visited the refugee camps in Thyangkhali.
The three laureates, who all through their lives have fought for human rights and democracy, expressed their anger at the inaction of world leaders over the Myanmar crisis.
The UN Security Council discussed the Rohingya issue several times but failed to take any concrete action against Myanmar that had denied the minority people citizenship and rights to education, movement, healthcare etc.
The Rohingyas have been fleeing since 1980s and the latest influx that began on August 25 last year is the largest, raising the number of refugees in Bangladesh to over a million.
In the first 10 days of this month, about 1,500 Rohingya crossed over from Myanmar.
‘CLEARLY GENOCIDE’
“Every single woman we met said they were raped, they lost families. One woman’s baby was taken off and butchered by the Myanmar soldiers. This is clearly clearly clearly genocide that is going on by the Burmese government and military against the Rohingya people,” added Maguire.
Terming it an orchestrated attempt to remove the Rohingyas out of Myanmar and out of history, she said the Nobel laureates reject the genocide policy of Myanmar.
“We reject this genocide policy of the Burmese government. They will be taken to the ICC and those who are committing genocide will be held responsible.
“As a human family, we cannot allow genocide of a whole people. The world must act,” said Maguire, who spent her life in bearing witness to oppression and standing in solidarity with people living in conflicts.
“We have, as a human family, to remove impunity because a people and military think they can kill and slaughter little children because this is a slaughtering way of allegiance in a massive massive scale. Where is our world going?” 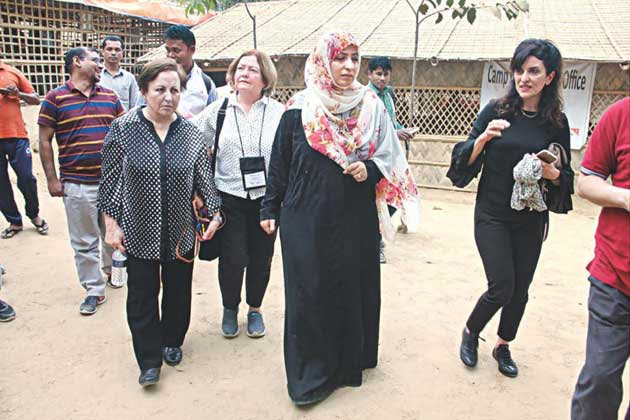 An official briefing the three female Nobel Peace laureates — Iran’s Shirin Ebadi (left), Mairead Maguire and Yemen’s Tawakkol Karman — as they visit the Thyangkhali camp yesterday. Photo: AFP/collected
She further said, “The international community has to say enough is enough and we all have to raise our voices and not remain any more silent.”
Yemen’s Tawakkol Karman said the Rohingyas are really facing genocide, a massacre, but the international community has “disappeared”.
“It is shame for all of us, for the international community that they are silent in front of the genocide,” she said, calling for the perpetrators of the crimes to be held accountable and tried at the international court.
The first Arab woman to win Nobel Peace Prize, Karman said the sufferings of the Rohingyas have been going on for decades under the eyes of the world.
“Now we are seeing an ethnic cleansing. That’s shameful with the world, shameful that these women have been raped and their children slaughtered. The worst crime is that they have been displaced from their homes, their country.
“Now this is a real real appeal to the international community, the UN and the Security Council to wake up. It is the time now to wake up.”
Later, Karman told the Thomson Reuters Foundation she had spoken to 15 women who said their husbands and some of their children had been killed, and they had been raped repeatedly by soldiers.
“You can’t imagine what we heard today,” said Karman, who won Nobel Peace in 2011 for her nonviolent struggle for the safety of women rights and peace-building in Yemen.
Iran’s Shirin Ebadi said that as members of international community it is their upmost demand Myanmar military be taken to the International Court of Justice.
“We are all paving the way for that,” said Ebadi, who was awarded the Nobel Peace Prize in 2003 for promoting human rights, in particular the rights of the women, children and political prisoners.
Meanwhile, she said, Rohingya refugees are still coming into Bangladesh that must stop because it is not good for the minority group and it also creates intense pressure on the people of Bangladesh.
The Nobel laureates expressed gratitude to Bangladesh government and people for their generosity in hosting the refugees, and urged the UN and international community to ensure the Rohingyas have basic needs and services.
“We are with you, with Bangladeshi people,” said Karman.
This story was originally published by The Daily Star, Bangladesh