Vladimir Putin, Russia’s President till 2024: A look at his political journey | The Indian Express

Vladimir Putin, Russia’s President till 2024: A look at his political journey | The Indian Express

Vladimir Putin, Russia’s President till 2024: A look at his political journey

Vladimir Putin, who was fighting his fourth electoral contest, received more than 76 per cent of the vote. With Sunday's verdict, Putin is slated to continue at the top role till 2024. 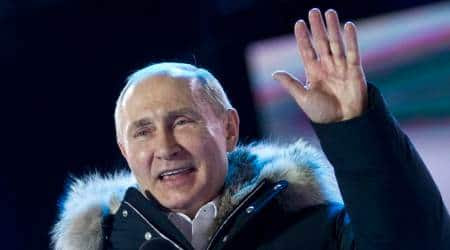 Russian President Vladimir Putin waves after speaking to supporters during a rally near the Kremlin in Moscow. (AP Photo)
Vladimir Putin stormed to a re-election victory on Sunday, extending his role as Russian President for six more years. Putin, who was fighting his fourth electoral contest, received more than 76 per cent of the vote. The main opposition leader, Alexei Navalny, was barred from the race.
Putin, 65, has been at the helm of power in Russia, either as president or prime minister, since 2000. He began his career as an intelligence officer in the KGB (Committee for State Security). He rose to the top ranks in the Russian government under President Boris Yeltsin’s administration. In 1998, under the Yeltsin government, Putin was appointed as the director of the Federal Security Service (FSB).
In August 1999, Yeltsin dismissed his prime minister, Sergey Stepashin and promoted Putin in his place. He also announced that he wanted to see Putin as his successor. In December 1999, Yeltsin announced his resignation and appointed Putin acting president until official elections were held in 2000. In March 2000, Putin was elected to his first term with 53 percent of the vote. He appointed Mikhail Kasyanov as the Prime Minister.
Russian President Vladimir Putin, center, gestures as he speaks at his campaign headquarters in Moscow, Russia. (Photo: AP)
In 2004, with 74 per cent votes on his side, Putin was re-elected to the presidency. In late 2007, Putin dissolved the government upon the request of the then Prime Minister Mikhail Fradkov. Viktor Zubkov was appointed the new prime minister.
Due to constitutional term limits, Putin was barred from contesting a third term in 2008. First Deputy Prime Minister Dmitry Medvedev was elected as the president. In a swapping of roles, Medvedev immediately appointed Putin as Russia’s prime minister, allowing him to maintain his political dominance over the country. In 2011, Medvedev officially proposed Putin’s name in the race for the presidency in 2012.
During this time, there were Anti-Putin protests in Russia, alleging electoral fraud. Despite this, in March 2012, Putin was re-elected to his third term as the president. He had amassed 63.6 per cent of the votes. He immediately appointed his protege Medvedev as prime minister. This switch was termed by many in the media as “rokirovka”, the Russian term for the chess move “castling”.
In 2107, Putin announced that he would seek a new six-year term as president in 2018. With Sunday’s verdict, Putin is slated to continue at the top role till 2024.
For all the latest World News, download Indian Express App
© IE Online Media Services Pvt Ltd
Publicado por salud equitativa en 5:48