Victory For The Hawks | The Indian Express

Victory For The Hawks | The Indian Express

Victory For The Hawks 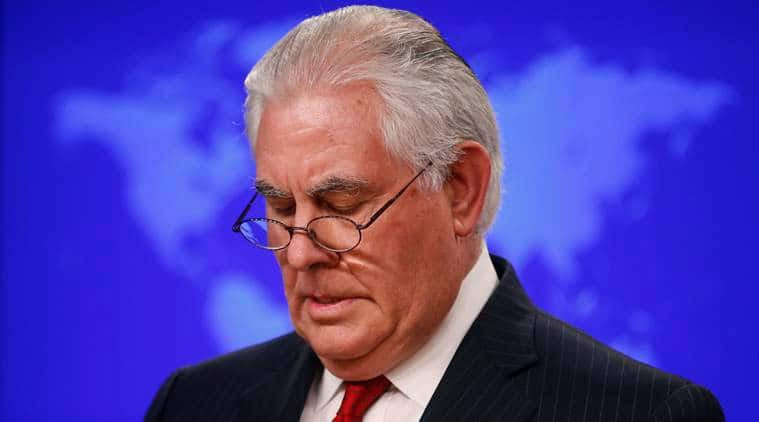 Outgoing US Secretary of State Rex Tillerson (Source: REUTERS/File)
Rex Tillerson being replaced as Secretary of State by CIA director Mike Pompeo could have a direct impact on US foreign policy in the Middle East. On the Iran issue, Pompeo seems to be on the same page as President Donald Trump. He has described the Joint Comprehensive Plan of Action (JCPOA) as “disastrous”. In fact, while announcing Tillerson’s dismissal, Trump mentioned that his main difference with the ex-Secretary of State was over the Iran Nuclear Deal.
It is well-known in diplomatic circles that Tillerson’s team was on the verge of meeting representatives of the key European negotiators of the JCPOA — Britain, France, and Germany. The White House, despite waiving the nuclear-related sanctions, again in January, had made it clear that this was the last time it would do so. It insists that the deal requires major changes in matters related to ballistic missiles, inspections and the duration of limits on Iran’s nuclear programme.
Tillerson’s departure couldn’t arrive at a worse time, since Trump and the hawks in Washington are giving their Iranian counterparts every reason to resume their country’s nuclear programme. After 14 months in the White House, Trump has a poor track record in trying to gain the upper-hand with Iran. The lessons of the Iranian policy of earlier American presidents do not seem to have been useful for him. Trump underestimates Tehran’s will and its capacity to resist threats. Jimmy Carter’s misguided rescue mission during the Iran hostage crisis, Ronald Reagan’s Iran-Contra affair scandal, Bill Clinton’s imposition of sanctions on Iran, George W Bush’s miscalculation in invading Iraq and helping Iran’s Islamic regime extend its power in Iraq, and in the rest of the Arab world, and Barack Obama’s nuclear deal in 2015, which avoided the military option against Iran, had one point in common: They were manifestations of America’s unenlightened foreign policy with respect to the Middle East, especially Iran.
Tillerson’s departure after 14 months as the secretary of state is a sign of confusion in the Trump administration. The US’s foreign policy seems neither on course to limiting Iran’s nuclear programme nor does it show the capacity to resist the country’s regional agenda. Threatening Iran verbally — which is what Trump is doing — with no strong American strategy towards the regime in Tehran and its proxies would only strengthen the hardliners and the Revolutionary Guards in Tehran.
Iran’s support for Syria’s Bashar-al-Assad regime, the Houthis in Yemen and the Lebanese Hezbollah as well as its military presence in the region is based more on pragmatism than ideology. They are also consistent with the Islamic Revolutionary Guards’ aim of increasing its influence in the Middle East. However, let us not forget that according to the International Atomic Energy Agency, Iran has adhered to the limits on its nuclear activity set by the 2015 deal in return for relief from international economic sanctions. The European parties to the pact have, in the past three years, only tried to improve the deal in return for the Trump administration not imposing sanctions against Iran — and exiting the nuclear agreement.
Despite Tillerson’s departure, the pressure being put on Iran by the Trump administration and the threat that the US may exit from the agreement, the Europeans continue to hope that the pact will remain unchanged. Though UK Prime Minister Theresa May and German Chancellor Angela Merkel have expressed concern at Iran’s presence in Syria and its providing missiles to the Houthis, nobody knows what commitments the EU can give to the US before Trump’s May 12 deadline for the re-certification of the nuclear deal — especially after Tillerson’s departure.
As political tensions heighten in Iran with the suspicious death of an Iranian-Canadian scholar in Evin prison, the repression of the Gonabadi Sufis and the arrest of feminists who were holding a demonstration on Women’s Day, opposition to the government in Tehran seems to be coming from unexpected quarters. The exit of Tillerson could portend a foreign policy emergency in the region. But it could also convince the European leaders that the US is planning a more active role in bringing about the end of Tehran’s Islamic regime. Let us hope that Trump’s desire to “roll back the disastrous deal” will not end up as a nightmare for the Middle East and the world.
The writer is professor and executive director, Mahatma Gandhi Centre, Jindal Global University
For all the latest Opinion News, download Indian Express App
More From Ramin Jahanbegloo