The pain of Syrian refugees: Parents try to forget as children cling to lost past | The Indian Express

The pain of Syrian refugees: Parents try to forget as children cling to lost past | The Indian Express

The pain of Syrian refugees: Parents try to forget as children cling to lost past

Five million people have fled Syria since the war erupted after anti-government protests were put down with force in 2011. The eight-year anniversary of when these protests began is on March 15. 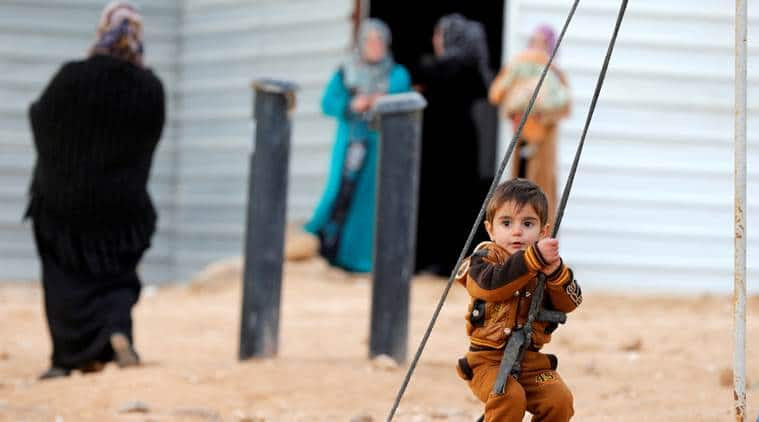 A Syrian refugee child plays before the arrival of actor Angelina Jolie, UNHCR Special Envoy, at the Al Zaatri refugee camp, in the Jordanian city of Mafraq, near the border with Syria, January 28, 2018. (REUTERS)
Warda, a Syrian refugee, wishes she could erase her old life, so painful have the memories become. By contrast, as the conflict in Syria slides into its eighth year, her younger children have nothing to remember of their homeland – nor to forget. They are part of a new generation of Syrians whose parents fled war and destruction in their millions but who themselves are too young to remember their homeland.
For Warda’s children, home is a makeshift tent in a refugee camp in Lebanon which they share with their grief-stricken, 34-year-old mother. “Even though I know I can’t, I want to forget Syria. I would forget my home, I would forget the place where I lived, I would forget my friends – I would forget everything. But one can’t forget,” Warda said as tears ran down her face.
Five million people have fled Syria since the war erupted after anti-government protests were put down with force in 2011. The eight-year anniversary of when these protests began is on March 15.
Warda and her son Bilal, 13, daughter Rayan, 7, and her youngest, a 3-year-old boy named Ibrahim, are among the one million refugees who stayed in neighbouring Lebanon. Most live like them in rickety tents with no running water and inadequate sanitation. “When my oldest son and I sit together, we reminisce about the things we used to do, going to the public garden or when I dropped him at school,” she said.
“But she doesn’t know what Syria is,” she said of her daughter Rayan, who sat on her lap. “She repeats what everyone else says. She says things like: ‘when I saw my father’ or ‘when I met my uncle and grandmother’ – but she doesn’t know any of them and it really hurts,” says Warda, who managed to get work as a fruit picker on nearby farms a few days a week. She earns $5 a day. Warda has heard nothing of her husband, who remarried and remained in Syria, for the past two years.
Our children don’t know Syria
Moussa Oweid al-Jassem from Aleppo is also struggling to keep the memory of Syria alive for his seven children. His youngest is four years old and the oldest is 16. “Our youngest knows nothing about Syria, she knows this camp. The children here don’t know,” said Jassem, who is 43 and a former textile factory worker. His family has nothing to remind them of home or of the lives they lived before. When they left, they had no time to take family albums or even the deeds to the lands they owned, he says. “We were not prepared to witness the things we have seen. The scale of the violence, the bombings and the airstrikes, we had seen nothing like it before.”
In this small camp on the outskirts of the town of Qab Elias, residents say they are trying their best to make this place feel like a home. The centre of the tented settlement has been kept free to host weddings and wakes, and for the children to play. On a sunny day, chickens strutted by and a cat looked for scraps as women peeled potatoes and chopped onions on mats spread outside.
Black pigeons made nests in tyres used as fortifications on tent roofs. His sons Khaled, 16 and Majed, 14, are among the few whose memories of Syria have not faded completely. “It felt better than heaven, ” said Majed, when asked to describe what home was like. What it is like to live in a camp? “Hell,” replied Khaled.
For all the latest World News, download Indian Express App
Publicado por salud equitativa en 11:58