Telescope: Why so serious? | The Indian Express

Telescope: Why so serious? | The Indian Express

Telescope: Why so serious?

TV shows need to laugh more at the political class At the Academy Awards, (Star Movies), Kimmel took aim at Mike Pence, Harvey you-know-who and other men in general — while the White House came in for a jibe, the man who lives there escaped notice this year, after dominating last year’s show.`
Between statues being “vandalised” and Karti Chidambaram being sensationalised (as in “sensational twists” in cases against him, Republic), news channels have been very busy pulling down people and raising a ruckus.
A good time, as any, to visit Ulta Pradesh. Here, nobody takes anything very seriously and everyone takes everything as a joke. It’s a wonderful state of affairs: Chaitu Laal has won the elections, or not quite, for his Theka Party; his opponent, the voluptuous and languorous “but-don’t-be-taken-in-by-my-sensuality” Gainda Devi has her “Ungli Party” MLAs guarded by a villainous looking “Nawaz Sharif”, as both politicians try to buy out MLAs from the “Chamach Party” to form the government from. There’s just one hitch: Because of “notebandi”, the market is “down”.
Or some such, in Ulta Pradesh.
Related News
Chaitu Laal offers them Rs 60 lakh and a car, only to be upstaged by Gainda Devi who throws in a flat. Aha, now enter Chaitu’s scheming wife and her brother. With the help of Dharti Baba (who whiles away his days buried neck downwards in the ground), they ensure Chaitu the chief minister’s swivel chair, which unfortunately gets stuck to his buttocks and may or may not lead to his suing those “behind” this insult.
And so it goes, a day in the life of a politician and his family, their families, friends and opponents. Obviously, everything is ulta-pulta, but what else would you expect when the members of the ruling parivaar have names like Malai, Bahumat, Sarkar and the household help, is called Pakodi? At least that’s what we understood, if it is possible to understand anything in the topsy-turvy world of Har Shaakh Pe Ullu Baitha Hai.
The new show on Star Plus sets out to present a sincere picture of politics in India, in a very literal way with satirical flourishes. Much of it is farcical and some of it over the top, but overall, we can smile along with Chaitu Laal’s toothy grin because the situations he finds himself in are all too familiar from what we know of politics in India.
This portrayal of a political family as corrupt, amoral but lovable and laughable may or may not exactly mirror Modi, Rahul & Co., but it does reflect the low opinion most of us have of the political class. Also, it’s in tune with the times, perhaps inspired by the PM, who has made political corruption a cornerstone of his political messaging.
At a time when news channels take politicians far too seriously, what a relief to see a TV show laugh at them. It may not be Saturday Night Live (Comedy Central), by no means, but Har Shaakh Pe Ullu Baitha Hai, is at least trying to take our politicians to task — something TV news doesn’t — however light-heartedly. (Aside: Difficult People on Comedy Central, has two New York comedians routinely take a dig at politicians and celebrities. On Tuesday, the victims were Woody Allen and US Vice President Mike Pence.)
Politicians have been satirised and demonised in Indian films but television entertainment has treated them largely with indifference. However, we now see a few attempts to reduce (!) them to the small screen. On Star Bharat, Nimki Mukhiya is a wicked take on politics at the village level through the eyes of an ingénue; Saam Daam Dhand Bhed has sadly lost its way into a love triangle after making a very promising start as a political thriller. It goes without saying that neither of them have anything good to say about politicians.
Ram Kapoor is lovable and laughable but Comedy High School is neither (Discovery Jeet). This comedy skit, which features school “staff” and “students” led by Principal Kapoor with a celebrity guest, tries too hard: It’s like you laugh so hard you end up coughing. The jokes fall flat and the slapstick goes down with them. So much so that guest star Salman Khan’s deadpan delivery was funnier than anything delivered by the rest of the cast. Back to comedy school, girls and guys.
Or, take lessons from Jimmy Kimmel and other American TV talk show hosts. At the Academy Awards, (Star Movies), Kimmel took aim at Mike Pence, Harvey you-know-who and other men in general — while the White House came in for a jibe, the man who lives there escaped notice this year, after dominating last year’s show.
Women dominated the presentation ceremony this time, with barely a few male of the species joining Kimmel on stage. Any wonder then, that a woman — Frances McDormand — won the award for the best Oscar moment by getting Meryl Streep to cheerlead all the female nominees to stand up and be applauded?
shailaja.bajpai@expressindia.com
For all the latest Opinion News, download Indian Express App
More From Shailaja Bajpai 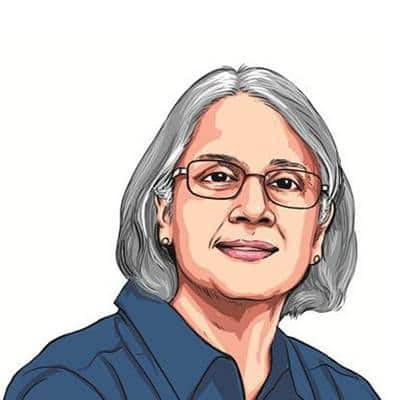