Tension has been growing between the two communities in Sri Lanka over the past year, with some hardline Buddhist groups accusing Muslims of forcing people to convert to Islam and vandalising Buddhist archaeological sites. Sri Lanka’s Special Task Force and Police officers stand guard near a burnt house after a clash between two communities in Digana, central district of Kandy, Sri Lanka March 6, 2018. (Reuters Photo)
Sri Lanka declared a nationwide state of emergency for 10 days on Tuesday to stop the spread of communal violence, a government spokesman said, after clashes erupted between majority Buddhists and members of the minority Muslim community.
Tension has been growing between the two communities in Sri Lanka over the past year, with some hardline Buddhist groups accusing Muslims of forcing people to convert to Islam and vandalising Buddhist archaeological sites.
Some Buddhist nationalists have also protested against the presence in Sri Lanka of Muslim Rohingya asylum-seekers from mostly Buddhist Myanmar, where Buddhist nationalism has also been on the rise. “At a special cabinet meeting, it was decided to declare a state of emergency for 10 days to prevent the spread of communal riots,” government spokesman Dayasiri Jayasekara told Reuters.
He said some people were instigating violence through Facebook and warned of tough action against them.The unrest in the Indian Ocean island’s central district of Kandy began on Sunday after the funeral of a truck driver from the majority Sinhalese Buddhist community who died days after he was involved in an altercation with four Muslims, the government has said. 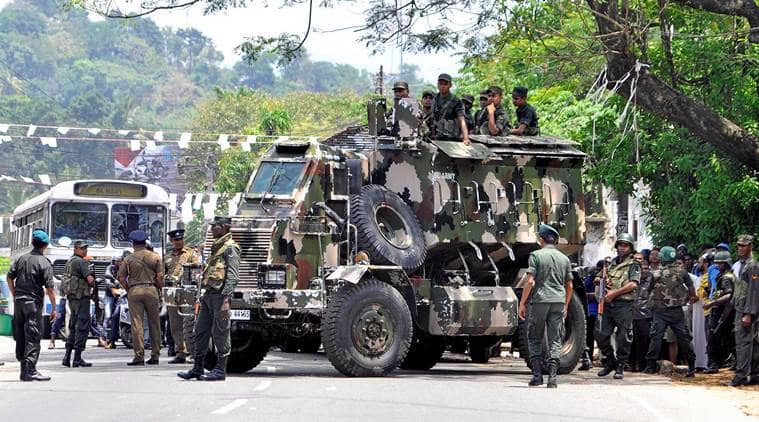 Sri Lanka’s army soldiers stand guard a road after a clash between two communities in Digana, central district of Kandy, Sri Lanka March 6, 2018 (Reuters)
It was not clear why the initial altercation occurred but after the driver’s funeral on Monday, a Sinhalese mob attacked Muslim shops, police said. The body of a Muslim youth was found in a burnt-out house early on Tuesday, police said.
Muslims make up about 9 percent of Sri Lanka’s 21 million people. Buddhists make up about 70 percent and ethnic Tamils, most of whom are Hindus, about 13 percent.
The government sent troops and elite police to the area on Monday and imposed a curfew. A curfew was reimposed in two districts of Kandy on Tuesday, police said. The government ended a 26-year civil war in 2009 with the defeat of Tamil separatist rebels. Muslim communities were occasionally caught up in that violence but on the whole, Muslims managed to stay out of the war.
‘Sri Lankan authorities must respect human rights’
Amnesty International said that the Sri Lankan authorities must respect human rights under the state of emergency. “It is important that the authorities take action against mobs who have incited hatred and carried out acts of violence against religious minorities. They have a duty to protect vulnerable groups and hold the perpetrators accountable. But a state of emergency must not become a pretext for further human rights abuses,” said Biraj Patnaik, Amnesty International’s South Asia Director.
The declaration of the state of emergency comes amid fears that violence against members of the Muslim minority may spread to different parts of the country. Under emergency powers, the authorities have sweeping powers, including to search, arrest, and detain. A state of emergency was previously in force from 1971 to 2011.
“While it is positive that the government wishes to prevent further violence, any steps taken to address the problem, however, must meet Sri Lanka’s obligations under international human rights law, including the absolute prohibition on torture, unfair trials and arbitrary detention,” added Biraj Patnaik.
For all the latest World News, download Indian Express App
Publicado por salud equitativa en 7:21